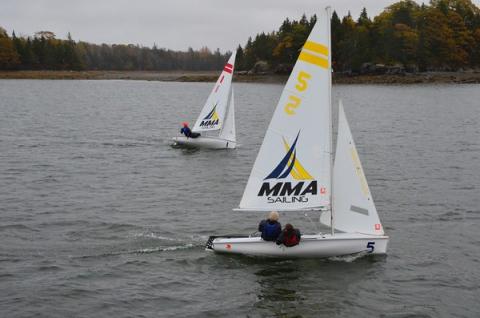 The Rockland team beat 10 competing teams of women sailers from powerhouses such as Yarmouth, Falmoutn and Marblehead, Mass.

Rockland Community Sailing High School JV and Varsity teams competed in collegiate 420s for the Becton Cup, Maine Maritime Academy State Women's Championship. Racing was postponed for a half an hour in the morning as winds gusted to 35 knots and straightened out all of the flags on the State of Maine, tied up alongside the Maine Maritime Academy waterfront in Castine. Racing commenced in the stiff breeze that remained after the rain stopped, and 11 boats began to work upwind in Smith Cove. Twenty-two young women from Maine and Massachusetts in various caps, bandanas, work gloves, and drysuits battled it out over 7 races to determine the Maine State Champions. In the end,the two midcoast high schoolers, sailing out of Rockland Community Sailing at the Apprenticeshop, came home with first place and the Becton Cup. Galloway and Chase sailed fast all day, with no fouls and no early starts. They also notched first place finishes in the 2nd and 5th races, at times stretching out an impressive lead.