Warming waters, depleted stock mean another year of no shrimp in Maine 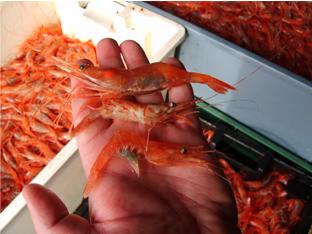 Bad news for all of us who love Maine’s small but tasty shrimp. In response to the depleted condition of the northern shrimp resource, the Atlantic States Marine Fisheries Commission's Northern Shrimp Section extended the moratorium on commercial fishing for the 2017 fishing season.

The 2016 Stock Status Report for Gulf of Maine Northern Shrimp indicated abundance and biomass indices for 2012–2016 are the lowest on record of the 33-year-time series, according to a news release from the Maine Department of Marine Resources.

Like last year, there will be limited fishing allowed for research – 53 metric tons, almost double last year’s allowance. “The Section sought to strike a balance between providing limited fishing opportunities to the industry while collecting valuable data to allow for the continued monitoring of the northern shrimp resource," said Section Chair Dennis Abbott of New Hampshire, in the release.

That’s the silver lining for shrimp lovers. Last winter, a selected group of fish markets were able to sell the “research” catch. The research set aside will include the participation of 10 trawlers (eight Maine trawlers, one Massachusetts trawler, and one New Hampshire trawler) and five trap fishermen, fishing for eight weeks from mid-January to mid-March.

Recruitment of northern shrimp is related to both spawning biomass and ocean temperatures, with higher spawning biomass and colder temperatures producing stronger recruitment.
Ocean temperatures in western Gulf of Maine shrimp habitat have increased over the past decade and reached unprecedented highs within the past several years. This suggests an increasingly inhospitable environment for northern shrimp and the need for strong conservation efforts to help restore and maintain a fishable stock. The Northern Shrimp Technical Committee considers the stock to be in poor condition with limited prospects for the near future. The 2016 Stock Status Report is available at http://www.asmfc.org/uploads/file/5823782c2016NorthernShrimpAssessment.pdf.