A Letter from Matinicus - Letters I Wish I'd Written

Letters I Wish I'd Written

In my former capacity as minor municipal functionary and general-purpose flunkie on the island of Matinicus, I was usually the one to collect the town's mail. After chucking all the valuable promotional material addressed to the Parks Department and the plumbing inspector, I opened what could not be avoided. A while back, we received two unrelated correspondences that caused a good deal of mirth in the town office. First, a bit of background. The topic of today's lesson will be junk cars. Junk cars used to find their way to Matinicus Island to serve out their last 100 or so miles and die, occasionally in the middle of the, uh, highway. Our roads are sometimes so rough, and our atmosphere is so corrosive, that to bring a valuable vehicle out here had always been considered foolish. That is, unless you intended go back to the mainland with it--an atypical behavior historically, and generally a bad idea, salt-spray-wise. Matinicus being notably lacking in law enforcement ("OK, buddy, where's your windshield?") and utterly devoid of vehicle inspection stations, the expression "island car" often meant a limping, rusting, sputtering shadow of its former self.

In recent years even some of the more hard-core islanders were getting disgusted with the number of decaying vehicles left lying around. Substantial trees had grown up through some of them. So the town (which it just barely is, technically,) took two giant, if uncertain, steps. First, the taxpayers were asked at Town Meeting to cough up big bucks for the purpose of hiring a barge and crane, with which we physically removed 50 or 60 vehicles, plus pieces of vehicles, from forest and field. This was a major community event, requiring many hands. Islanders pulled, pushed, twitched and bulldozed each wreck to the wharf, while other islanders picked the broken glass out of the road. It was not a project anybody wished to make a regular practice. Next, as we have no authority to pass local ordinances (being a "plantation," which means more or less an unorganized territory which collects taxes and sells dog licenses,) we approached the state legislature for permission to require that a vehicle disposal deposit be paid to the town before any vehicle could be brought to the island with intentions to stay. This would pay for the removal of future abandoned cars, and has proved to be a disincentive for anyone to bring out some wreck not even worth the $250 deposit. So far the program has worked rather well.

That said, realize that enforcement of the deposit ordinance is not an easy task. The responsibility falls to one of our own; no agency or authority with the comfort of professional distance is the heavy. Our "Enforcer" (a former island schoolteacher) has to take a lot of grief from the "rules are made for other people" crowd (which describes us all, to a certain extent, on Matinicus.) Also, one must realize that removing a dead car from the island means getting a few guys together when one of our infrequent state ferry trips is happening, and pulling or pushing the derelict aboard, if there happens to be room, with prior arrangements having been made for a wrecker to meet the vehicle on the Rockland side. The ferry crew will not touch the car, nor should they. Being such a big production, junk car removal doesn't just happen on command. Now that you know how things work, imagine being the municipal official who received this from an attorney: 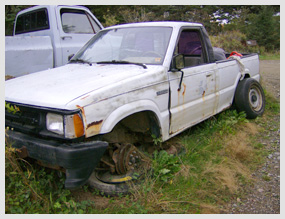 "Gentlemen: As counsel for_____, we are writing you regarding four vehicles that have been abandoned on the property of ______ (two vans and two trucks are identified, and their owners are listed; the vehicles are located in what was considered the town parking area near the wharf, which property had recently changed hands.) "We really would like to avoid any type of legal action against these men and believe a request from your appointed law enforcement officials would be the most appropriate action." Oh goody...a threat. The indication was that if our law enforcement didn't do something about it, theirs would. We'd been looking for a solution, so here was our big chance. Thus, the letter I wish I'd written: "Gentlemen: We can't find those guys either. We suggest you contact the appropriate authorities and have those vehicles immediately impounded." The same month brought notification by mail from someone who intended to bring an automobile on the ferry. He would pay the deposit, but refused to sign our benign little form which indicates how the money is used should we have to remove the vehicle if abandoned. He crossed out most of the text of the brief agreement, initialed every blackened line, and attached the following letter: "Enclosed please find a copy of the document. I have signed it in the manner suggested by my attorney so as to preserve both my legal rights and your efforts to prevent the island being strewn with vehicles abandoned by transient sternmen." I regret not responding as follows (it's all true): "Dear _____, We all have to play by the same rules. Thank you. Sincerely, J.G., Assessor, sternman W.A., Assessor, former sternman R.K., Assessor, sternman P.M., Tax Collector, substitute sternman J.T., Town Clerk, sternman E.M., Treasurer, administrative assistant, former sternman." Sometimes it is hard to resist dispatching a good letter.