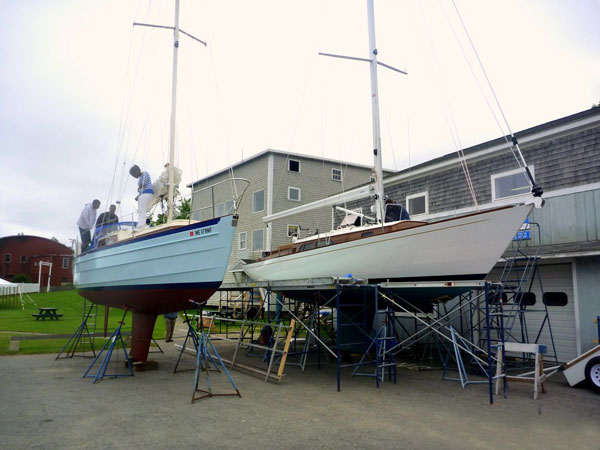 Photograph by John K. Hanson, Jr. Scroll down to view more images.
For the spring we had, Saturday, June 16, was a beautiful day, only slightly overcast and almost warm. It was a good day for a launching -- or two. Arch Davis, a Kiwi boatbuilder/designer who has been marketing kits and plans for elegant and efficient small rowboats and sailboats out of his Belfast shop since 1988, got to launch a boat for himself on Saturday's mid-morning tide. For the past five years or so, Davis fit the designing and building of a boat for himself into the hectic schedule of keeping the kits and plans business flourishing. The Grace Eileen is a 30-foot, lapstrake plywood weighing 7,000-lb. sloop that utilizes much of what Davis has learned over the years using plywood as a boatbuilding material. It is strong, light, and stiff. The boat draws five feet and has a moderately modern underbody. The sloop shows its New Zealand heritage in both its underwater shape and the distinctive cabin/doghouse on deck. The Grace Eileen went into the water with the sounds of bagpipes playing, slid off the trailer and floated perfectly on her lines. The towboat, a Davis-designed Penobscot 14 rowed by three young women, came alongside and took up the tow. The Grace Eileen is engineless. After a short tow, the new Pope Sails were hoisted and the maiden cruise was underway. "We had a bit of everything in the first twenty-four hours: drifting, right up to tying in the first reef. The boat is exactly what I was hoping for," said Davis. No better words could be spoken. Another example of fabulous Maine boatbuilding, Untide the new French and Webb 37, designed by Mark Fitzgerald. The boat is a state-of-the art modern wooden daysailer, long and lean, and with its big cockpit, ready to take some friends along for a fast daysail. Untide had had its official launching two weeks earlier, but had been hauled by the builders to tend to some of the myriad details that go along with a new boat launching. The builders, Todd French and Peter Webb are quite please with the results and according to designer, Mark Fitzgerald, it sails as as good as it looks. The sloop was scheduled to sail to its Cape Cod home on the Solstice.