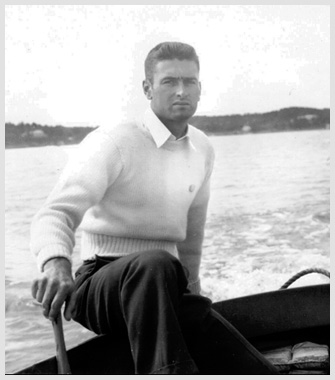 A young Jim Brown on the ocean he loved.
(Image courtesy of the Brown Family)
Jim Brown of North Haven was one of the lucky ones. He lived a good, long life, surrounded by his family, doing what he loved. He even died a "good" death, on the island he loved, on December 10, 2008, at the age of 91. Jim and his wife Dorothy had two sons, James and Foy, and one daughter, Kim Alexander. Alexander said she was beginning to realize that her father did lead a remarkable life. "When you're right in the middle of it all it's hard to recognize what others are seeing," she said. Reading the condolence cards her family has received has given her some perspective. Many of the senders admired the same things: her father's work ethic, his craftsmanship, and the strength of his family. Alexander said she is beginning to marvel at her father's way of life. "He was sure he was doing the one thing he was meant to do, the only thing he wanted to do, in the only place on earth he wanted to be," she said. "Most people spend their lives dreaming of having that kind of life." Jim Brown was born on North Haven on January 2, 1917. He was the son of Foy and Winona Mills Brown, and the grandson of James O. and Flora Carver Brown who established J.O. Brown's Boatyard in 1888. The building was originally a clam factory before J.O. Brown converted it into a boat shop. 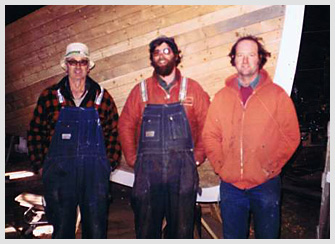 Jim Brown, left, and his two sons, James and Foy, in 1981.
(Image courtesy of the Brown Family)
After the death of his father in 1940, Jim Brown took over the business when he was only 23. Brown's children and grandchildren continue to run the business, in the same building, following the 120-year-old family tradition of old-fashioned Maine wooden boat building with the same methods, techniques, and tools being handed down through five generations. Jim was extremely proud of the family business. "He had a great appreciation for working with wood," said his daughter. "He was driven to be at the boat shop. Every time he returned to the island it was always the same thing. He would say, 'Boy am I glad to be home'." Then, she said, "he would go straight upstairs, change out of his city clothes and into his work clothes and bolt out the door to the shop. He didn't stop to check the mail, unload groceries, or unpack. Maybe, just maybe, he slowed down enough to pet the cat, but he was always fierce to get back to work." The last wooden boat Jim helped build was in 2006, the Agnes. "He loved the challenge of getting all the pieces to come together," Alexander said. She put together a self-published photographic essay of the time it took to construct the Agnes, a 23-foot classic wooden launch, and presented it to her father for a Christmas present. It is titled "he Making of the Agnes: One Hundred Twenty Years--One Maine Island--One Family--One More Boat. 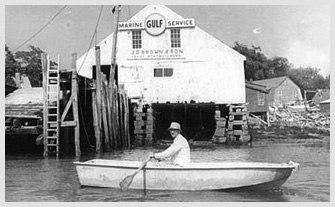 Jim Brown rowing out to the lobster scow,
with his boat shop in the background.
(Image courtesy of the Brown Family)
As late as November, Jim could be found at the boat shop, answering the phones, making change, and, as he put it, "doing the heavy lookin' on." Alexander said even childhood stories of her father were told of him working, not playing. He spent many early days loading wood or rocks or dirt into his little blue wheelbarrow. Born into a boatbuilding family, he was expected to follow in his family's business. "Fortunately, it was all he ever wanted to do," Alexander said. "All these years we never heard him talk of doing anything else, no dreams of other careers. And it wasn't as if he never went anywhere or didn't know what he might be missing. My parents traveled a bit over the years, vacations all over New England, Canada, up and down the East Coast, the Caribbean, but none of those places held a candle to North Haven. Although they were nice places and offered interesting sites they didn't have anything that was better or more enticing than the island for him." Despite his work ethic Jim always took Sundays off between Memorial Day and Labor Day to take his family island-hopping and picnicking on his 36-foot lobsterboat Two Sons that he built himself in 1952. His wife, Dorothy, would pack up the picnic baskets and off they would go to one of the many small islands that dot Penobscot Bay. 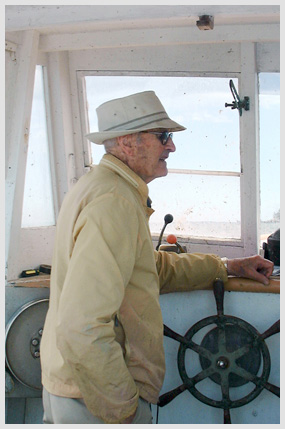 Jim Brown on his boat in 2004.
(Image courtesy of the Brown Family)
Alexander said they would swim, play in the boat, collect driftwood and sea glass, and eat. "The food was almost always the same," she said. "Hot dogs cooked over a driftwood fire, chips, soda, grapes, cherries, or watermelon on the Fourth of July, and for dessert it was always 'mam' cookies." Her mother is called "mam" by all the grandchildren, and is known for making delicious toll house cookies. "The box of cookies gets passed around on the beach and then again on the boat just as we get back into the Thorofare from whatever island we've been to," Alexander said. "It is a great tradition and we still do it. My father was a lucky man by his own estimation, and I don't think he had many regrets," "Even in his death he got close to what he envisioned," said Alexander. "He always said he wanted to drop dead out in the yard. And even though it didn't happen quite like that, having been able to stay on the island, in his house, well, it was a close second." Kim said her family was clear on her father's end of life wishes and those wishes were respected. She said the family had a lot of help from the North Haven Medical Clinic staff who let them know what to expect. There was a storm on December 10, the day Jim died, and the North Haven ferry did not make its trip back to the mainland. So Jim's son Foy W. and his grandson Foy E. built Jim a coffin. "It was a comfort to us to make a sort of tribute of building a coffin by hand," Alexander said. "We laid Dad out in the boat shop overnight. It seemed fitting, the way that things used to be done. I think it's what he would have wanted." Alexander said her family decided to bury Jim in the coffin. "It was much more personal for us." Her niece Lydia Brown decorated it with fir and holly. "My father was one of the fortunate ones who led his life as he wished, for a good long run, right to the end," said Alexander. "We should all be so lucky."

This article originally appeared at www.villagesoup.com on January 17, 2009. We run it here by permission. Reporter Tiffany Strong can be reached at 207-594-5351 or by e-mail at tstrong@villagesoup.com.