photography by Lynette L. Walther
June is the month when everything seems to come together in the garden. The vegetables are in, finally, seeds and seedlings are planted with the tomatoes going in last to be certain the soil has warmed up enough. Make sure to plant an extra row for the hungry so you can take some of your harvest to a local food pantry. In the flower beds there are perennials showing up that we forgot we had, sort of like surprise packages unfurling in the seasonal sun. It is also a time when there are so many little things to do in such a short amount of time that a list is in order. So, here it is. Things that the Maine gardener must do in June: * Put up supports for snow peas and other climbers to avoid damaging their root systems later on, and to give tender plants a ready access to climbing supports. Put in tomato tepees or other supports now, and pinch back suckers on plants to promote fruit production. Tomatoes may need water every day during the driest and warmest weeks.

There’s still time to enjoy rhubarb. Remove flower spikes to
keep plants in production. In the fall add a bucket of compost
or well-rotted manure to each plant for a good harvest next spring.
Photography by Lynette L. Walther
* Remove bloom spikes from rhubarb to keep plants in production. Extra rhubarb can be cut into chunks or diced for sauce and breads, packed two cups per container for easy measuring, and frozen for “blue-barb,” (blueberry-rhubarb) pies and rhubarb bread, later on. No blanching or processing needed. * Establish new strawberry beds now. Mulching new plants well with hay and pinch off any blooms to ensure a good crop of berries next summer. Established beds will need supplemental watering for good berry production if there is not at least an inch of rain per week. 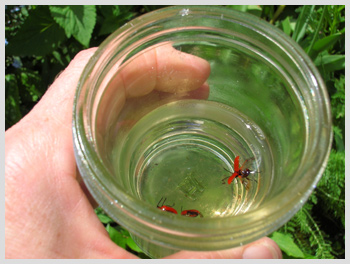 Watch for the scarlet lily leaf beetles on Oriental and Asiatic lilies.
Hand remove by dropping them into a jar with some liquid soap
mixed with water. Photo: Lynette L. Walther
* Keep a close watch for those little scarlet-colored lily leaf beetles. Early evening is the best time to spot these newcomers to the area. They will decimate your Oriental and Asiatic lilies if not removed now. About the same size and color as a ladybug, but without the spots, lily leaf beetles are easy to control by hand picking. Use a small glass or jar that contains some water with a few drops of liquid soap added, and position the container underneath the bug. Tap the leaf so the bug falls into the container. Be quick as they are good fliers and will escape if given a chance. * For better flowers and stronger plants with less chance of powdery mildew problems later on, thin out perennial phlox now by pinching out the smaller stems at the base of the plant. Depending on the size of the plants, about half of the stems should be removed. * Pinch back perennial mums now for fuller growth and more flowers come fall. * Remove weeds from vegetable and ornamental beds before they get established and go to seed. Pull or hoe weeds rather than using herbicides. Mulch vegetable beds between rows with leftover straw or newspapers to keep weeds down and retain soil moisture. * Work some of those fall leaves into the compost pile as new green matter is added. The best time to spread compost is in the fall, rather than in the spring when emerging tender shoots could be damaged. * Hydrangeas can be trimmed back now where new growth has not emerged from last year’s wood. Newer varieties such as “Eternal Summer,” “Blushing Bride,” and those in the “Forever & Ever” series produce blooms on both new and old wood making flowers a certainty. * Allow spring bulb foliage to die back naturally, removing only after it has completely turned brown. Foliage continues to “feed” bulbs long after flowering has ended, ensuring good blooms next spring. * Deadhead annuals daily—including pansies and violas—to prolong bloom times. Pansies planted in pots can be moved into shadier locations once temperatures warm up. Many will continue to bloom throughout the summer and into the fall if treated this way. * That delicate, pale blue Myosotis or “forget-me-not” has mostly gone by. Don‚t be shy about pulling it out of the beds as it begins to get powdery mildew. There will be plenty of seeds left behind for a good show next spring. Trim back any Pulmonaria or “lungwort‚” that is also susceptible to mildew, to tidy up the gardens. 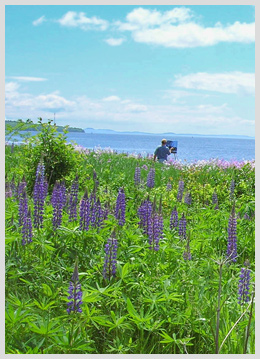 June is when the lupines are in their glory.
Let them go to seed for more plants next year.
Photo: Lynette L. Walther
* Enjoy the lupines as they come into their glory this month. Don’t deadhead, but instead allow plants to go to seed and self-sow in the fall. There is never enough of this Maine standard flower. * Move house plants outdoors, slowly exposing them to the sunshine. Remember their foliage will burn if exposed to full sun too soon. Some, such as many ferns and orchids for example, do not ever tolerate full sun. * Geraniums that have grown long and stringy indoors over the winter can be trimmed back now. Use cuttings to root new plants. * A root-stimulating concentrate used according to directions when planting annuals, new perennials, trees, and shrubs, and when dividing plants or rooting new plants will greatly increase success. * Apply lime to lawns and gardens now, according to label directions, to help sweeten the soil and enable grass and plants to take up nutrients. Pellitized lime is easiest to spread. * Of course the grass has already been mowed several times by now. But did you remember to sharpen the blades of the mower? If you use a power mower, adjust the mowing height to at least three inches to allow grass to form deep roots which will help sustain it when temperatures climb later in the summer. * Water deeply weekly. A deep watering once a week is far better than frequent "spritzings," which will promote shallow root systems that are not as drought tolerant as deep ones. Water early in the day to reduce evaporation which is greatest mid-day. Remember that roses and many other plants need an inch of rainfall or supplemental water each week. Early watering also allows foliage plenty of time to dry to help prevent spread of the diseases that wet foliage can promote. * Don’t forget to use your sunscreen, and to take the time to stop and smell those roses. Whew!