Illustration by Caroline Magerl.
June is the month of stolen summer days. Any day before the summer solstice that is sunny and warmer than 70ºF—and that is a day when one doesn’t have to work—is an extra day of summer. Spending that day in some worthwhile pursuit, i.e., on the water, is not subtracted from the high season. All of summer is still in the bank, the principal remains untouched. So too are the late September and October days after the vernal equinox: any summer-like days are the trailing interest in your summer account; the principal may be gone but some disposable income remains. As Captain Jack Aubrey of HMS Surprise would say, “Waste not a minute.” 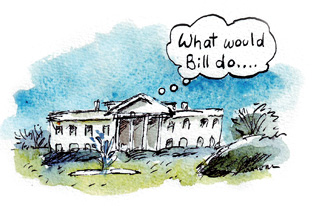 Illustration by Caroline Magerl.
WWBD? While reading headlines from around the state for fodder for this column, I discovered that someone named Bill has an inordinate amount of influence in Maine. Who is he anyway, and why does he get so much attention? Here are some headlines generated by Bill, each followed by my guess about what Bill’s thinking might have been: » Bill would allow towns to shoot beavers. Some towns just don’t have a lot of tourist attractions. This could really bring them in. » Bill seeks to expand moose hunt in north. Many downtowns have prohibited moose hunting entirely within city limits, depriving urban hunters of the chance to shoot a lost or deranged moose on Main Street. » Bill would nix ethanol in Maine. Ethanol is dangerous and could make you go blind. Have some Allen’s Coffee Flavored Brandy already! » Bill would require drivers to give walkers more room. It’s mostly a safety thing, but if they really want more room, they’ll have to pay a share of the highway taxes. Bill certainly has a wide range of interests, touching on the sporting, social, and health issues of our times. As you go through life seeking answers, ask yourself, “What would Bill do?” The Bard of Yawkey Way In sporting news that escaped Bill’s interest, a Bangor Daily News headline noted that, “Red Sox Release Backstop Bard.” I didn’t know that the Sox actually had a bard, much less a backstop bard in case the principal bard gets laryngitis or something. I would like to know when either position becomes available so I can apply. My application: Is this a bat which I see before me, The handle toward my hand? Come, let me clutch thee. I have thee not, but neither doth Manny. Bait Finder For those of us who sometimes wonder where our next dead mackerel will come from, help is at hand. Thanks to our friends at Boat/US, we now have a nationwide online bait shop locator. It includes Canada (we don’t want to get too far ahead of the Joneses, eh?). Perhaps we jest too much. This is actually a pretty good idea, since it also combines information on local bait suppliers with many of the other details that every traveling angler needs: guides, charters, licenses, etc. See www.boatusangler.com for the full offerings. One of my elderly maiden aunts abandoned single life in her sixties and married a man who boasted to us youngsters about having caught 100 different kinds of fish in 40 states, a level of adventure I found so impressive that it took the moon landing to supplant it in my mind as a giant step of mankind. How Do You Like Your Bath, Your Lobstership? Maine’s lobster industry has long been a shining example of a largely self-policing and self-preserving industry. Fishers of lobster have often worked hand-in-hand with scientists to understand the life cycle of the crustacean and the conditions that encourage reproduction and growth. The Portland Press Herald reported in March the latest collaboration: a partnership known as eMOLT, or Environmental Monitors on Lobster Traps (don’t you love acronyms?). A variety of marine science organizations, lobstermen’s associations, and Southern Maine Community College have teamed up to place monitoring devices that will provide season-long thermal data collection in traps. Individual participants can see their own data online, and the public will see consolidated data at season’s end. Find out more at the Northeast Fisheries Science Center website: www.nefsc.noaa.gov. SMCC students have also been involved in another monitoring system. Each year they build low-cost surface drifters: simple GPS-equipped ocean travelers that provide new data on currents in the Gulf of Maine. Lobstermen hope that correlations drawn from all the collected data will eventually help them predict productivity based on conditions and allow them to tailor their efforts and expense accordingly. Our Traps Runneth Over Since we are discussing the lobster’s ecosystem, note should be made of the concerns of Robert Steneck, a University of Maine marine biologist. According to the Kennebec Journal, things may be a little too good for the lobsters, which have benefited from the decline of fish species that preyed on them, leaving us as their only remaining predator. Steneck notes that a dense lobster population is susceptible to disease, such as the one that nearly destroyed the Long Island (New York) lobster population in 1998-1999. He stresses that biodiversity, not a big population of one species, ensures a healthy ecosystem. Maine enjoys the greatest density of lobsters in the world, and a catastrophic disease could have devastating social and economic effects. Perhaps our President should issue lobster coupons as part of the stimulus package to help reduce the dangerous over-crowding taking place on the sea floor. I will do my part, and would accept your coupons, too, if you can’t use them yourself. 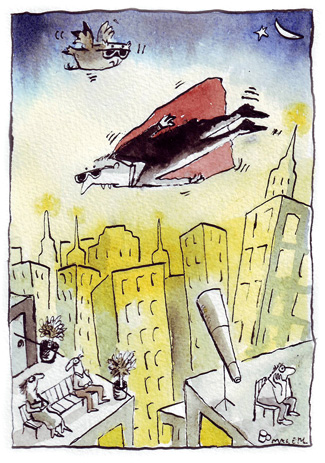