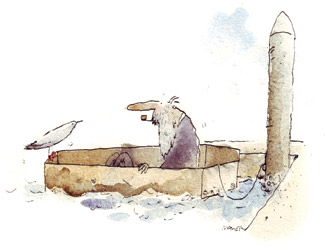 Illustration by Caroline Magerl.
Sleeping with the Fishes Some years ago I wrote describing my concept for an assisted-living marina. The aging sailor beginning the long reach toward the distant horizon could come to Capt’n Pete’s Marina and begin a succession of ever more restrictive activities, funded by exorbitant slip fees and boatyard bills for un-performed services. Dining options would include diesel-flavored beans and uncooked rice flambéed in stove alcohol. The life-concluding events would be nautically oriented also, if clearly tongue-in-cheek. Life, however, has now imitated art. It is now possible to have one’s cremated remains (known as cremains in the death trade) tucked into a nook of an artificial reef made to look like the Lost City of Atlantis. We are not kidding. You must visit the website of the Neptune Society, www.neptunesociety.com, and click on the link “Memorial Reef.” While I have scattered ashes at sea myself, there is something a little off about an undersea edifice for one’s cremains. But I am inspired by their lead. My brother and I once dove beneath our dock in Boothbay and found a shallow cave inhabited by the largest lobster I have ever seen, in the wild or in an aquarium. We named this “The Cave of the Jaws of Death.” The Porch Society will begin taking reservations shortly, prepaid in cash only. When less is more In an Associated Press article via the Bangor Daily News, we learn of a perverse economic reality in one of our most consumed substances, water. It seems that with less economic activity, the costs of municipal water systems are spread over fewer rate-payers, who themselves are also using less water. Fixed expenses in municipal water are not easily reduced in the short term, and the result is that the cost per unit of water is rising. It took us a while on the Porch to wrap our various (small) minds around the concept that using less of a commodity should cost more. That accomplished, we naturally turned our talents toward a solution. Officials blame the decreased water use and revenues on, among other things, decreased tourism, resulting in fewer showers and toilet flushes. This was clearly a problem we could work on. We propose that The Great State of Maine modify its tourism advertising to encourage our visitors to sweat more and eat more fiber to reverse this trend. Admittedly, the burden will fall on the hospitality trade, but think of the health benefits. Gastroenterologists will celebrate clean colons, and water rates will tumble. Come on people, let’s think outside the bottle. So live a little In the recent past we have noted that boatyards have had more summer residents leaving their vessels high and dry than usual due to the economy. Let’s hope that the trend reverses itself this season and that a rising tide lifts all boats. If you are returning to the seas this summer after an unwanted hiatus, remember that your rusty seamanship skills will be duly noted as you pass the porch. Feet up, binoculars at the ready.

Long-time MBH&H Contributing Editor, freelance writer, and raconteur Peter Bass is an owner of Maine Cottage Furniture. Click here to read other articles by Peter Bass » To submit your comments... newsy tidbits, photos, illustrations, clippings, rants, and raves for possible use in this column, use the form below. Or mail to “View From the Porch,” P.O. Box 758, Camden, ME 04843 or fax to 207-236-0811. Items may be edited for length and clarity; materials become the property of Maine Boats, Homes & Harbors, Inc.