And then there are the snow fleas... 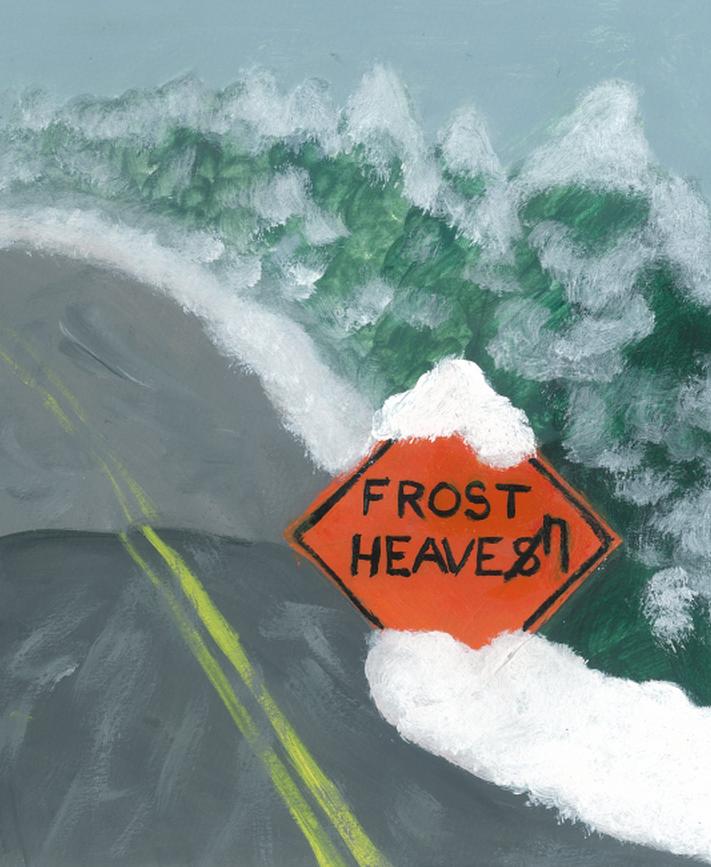 Nora Shaughnessy They say Maine has five seasons, mud season being the fifth, but whoever was counting missed frost-heave season, which precedes mud. It started last week, heralded by the neon-orange frost-heave signs the highway department nails to the trees. I have a four-wheel-drive pick-up now. Helps me fit in here. It also helps me up the driveway, but it does take those heaves awful hard.

It’s those extra two seasons that separate the summer folk from the year-round folk, because if you can weather frost-heaves and mud, you are here to stay. When I take the hairpin turn at Twombly’s Plumbing, past the stacks of ripped-out toilets and propane tanks of all sizes, and turn onto the Barnacle Road, I know I have passed the test. From there I can look out across the water, past the islands like frosted cupcakes, to the little town of Castine and its harbor, and from there on to the Camden Hills, white against the cobalt sky.

My end of the road is dirt, so it doesn’t suffer as much from the heaves. Right now it’s covered in four inches of ice with ruts that can grab your tires and pull you straight into the ditch, unless you have four-wheel drive like me. Walking down the middle are Milly and Barb. Milly’s got a big stick for stability and Amber, her dog, on a leash. Amber is a problem child. She’s a Golden retriever/husky mix, a deep russet color with husky eyes that look like they’ve been done up with eye-liner. A shelter dog, she was found locked in an abandoned house; now she tries to eat her way out of Milly’s house every chance she gets. She’s eaten right through the doorjambs. Milly took to leaving her in the car on cool days when she was at work, but Amber ate the upholstery and the seat belts.

Milly’s a native. She is my special friend on the Barnacle Road. We go mushrooming together. Never have had the nerve to eat any, but we tromp through the woods together, pulling up samples with tufts of peat, then take them home and look them up in our books, make spore prints, try to figure out which family they belong to, throw them out. Milly’s attuned to nature. She has an appreciation for every living thing, from lichen to sea urchins. I’ve seen her go into ecstasy over the grooves on the trunk of an ash tree.

Barb’s from New Jersey. This is only her second winter; moved here last year in the middle of an ice storm. She always wears a cat-swallowed-the-canary smile, like this place is too good to be true.

I stop, of course. Sometimes it can take 45 minutes to drive the mile down Barnacle Road. There are always people out, and they all have tales to tell. I roll down the window and for the first time since October, I hear song birds. We have raptors: hawks, the occasional turkey vulture, and daily bald eagle sightings, but the song birds skedaddle out of here as soon as the leaves fall.

“Spring is in the air,” Milly says. Amber moves up close to the car.

“Milly, see you got your coat fixed.”

“No, no it’s a new one. Same color.
I did love that color. The seamstress couldn’t fix the damage Amber did. Ate right through to the pocket lining, looking for treats. Hey, I saw your ridgepole the other day. In the winter I can just see it up the hill through the trees.”

“Oh, well. We don’t get out much these days. Went straight off the road on the way to Bangor after that last storm, stayed there a long time until Paul Lord came by and hauled us with his truck. So I’m home, happy just looking out the window at the water. I’m looking forward to planting some flowers.”

“That will be quite a wait, Barb,” Milly says, “It’s only February, you know. But I have seen snow fleas. Have you seen the snow fleas?”

“No, no really. There are such things,” Milly says. “They float just on the surface of the puddles when the ice starts to melt. Tiny black things.”

Barb’s grin gets bigger. She looks at me and shrugs her shoulders.

I start up the truck and hear Milly as I pull away. “Now really, Barb, I mean it about the snow fleas.”

In my driveway, there’s a puddle right next to where I park the truck. I get down on my knees and look, but don’t see any snow fleas. But wait, there are some black specks. I wonder.

Charlotte Crowder, a medical writer and editor, lives on the Blue Hill Peninsula.