By Peter Bass
In mid-February, while those in the boating trade are heading for the Miami Boat Show for their midwinter fix, my reader and I are dreaming of a real boat show: the Maine Boatbuilders Show, which you may be stumbling through while reading this issue, a double dose of pure pleasure. This show, created by the Spragues of Portland Yacht Services (and the summer boat show produced by this magazine) has an audience far beyond the borders of our state. Both celebrate our traditions, skills, and culture, and show Maine in its best light. To see us in somewhat dimmer lights, read on. Booze Nooze The Lewiston-Auburn Sun Journal reported that Maine’s junior Senator, Angus King, broke new ground by having an online video chat with key staff at Shipyard Brewing. Although probably not the first use of Skype for constituent contact by a U.S. Senator, it is probably the first use of the service to contact a local brewery by a U.S. Senator. If I were a U.S. Senator from Maine, I would do my arm-twisting with colleagues by serving Maine brews and lobster rolls. Senator King may gain influence more quickly than he thought. In more sobering news, the former White Rock Distillery in Lewiston, bought by Jim Beam and now a division of that company, will close over the next 12 months, eliminating about 160 jobs. Some of the Maine employees will be able to apply for jobs in Jim Beam’s Kentucky distilleries after taking Kentucky-as-a-second-language (KSL) training. This spiritual news came from a Portland Press Herald article forwarded to me on the winter porch. White Rock has enjoyed great growth of late in its Pinnacle Vodka and Calico Jack Rum lines, which are the brands purchased by Beam. White Rock is a great Maine marketing success story; the acquisition by Beam of these brands for $605 million confirms that, though it is cold comfort for its employees. 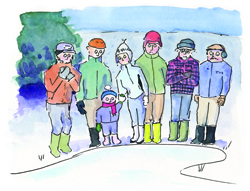 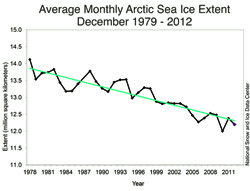 All illustrations by Ted Walsh
Roll tide The Bay of Fundy and the amplifying effect of its shape on the tides have long fascinated us here on the porch, as it has spawned many porch conversations along our coast. An article by Leslie Bowman in the Working Waterfront newspaper caught our interest lately. In it she reported on a paper by Dr. David Greenberg of Fisheries and Oceans Canada at the Bedford Institute of Oceanography in Nova Scotia. Titled “Climate Change, Mean Sea Level and High Tides in the Bay of Fundy,” it lays out the science that suggests there could be an increasing tidal range in the bay, whether there is climate change involved or not. There is evidence that the amplitude of the bay’s tides has varied sharply over recent geological time. Changes in amplitude can affect the environment and habitability of the bay, altering current velocities and biodiversity, thus changing where we can live and work. The scientific facts cited were interesting to those of us on the porch, but the article introduced another element that was good for another evening of prattle. Dr. Greenberg cited oral tradition from the Micmacs about the inundation of the Minas Basin, the finger of the Bay of Fundy south and east of Cape Split, 3,400 years ago. He referred to the record of these tales in “The Legends of Glooscap,” which sent us to the bookshelves of cyberspace. Who was Glooscap? All I will tell you is that when he slept, his bed was Nova Scotia and his pillow, Prince Edward Island. Keeping the lights on For many years, the Robinson Point lighthouse keeper’s cottage, the Keeper’s House on Isle au Haut, was operated as an inn. When it was closed and offered for sale recently, some worried that the property might be transformed by a new owner, and the nature of the property and its place in the community might be forever changed. The Keeper’s House, under longtime owners Jeff and Judi Burke, had become a well-known stop for travelers looking to experience island life as it was a century ago. 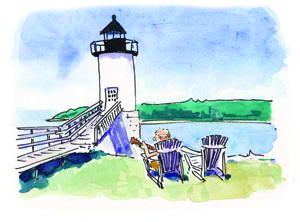 All illustrations by Ted Walsh
An Isle au Haut summer resident and friend of the Burkes, Marshall Chapman, has purchased the property and plans to reopen it as an inn. Mr. Chapman, a college professor from Kentucky, shares the Burkes’ interest in sharing the past with others. When the sale was consummated, Jamie O’Keefe, the listing agent with The Knowles Company, a Northeast Harbor real estate firm, sent out a press release that piqued the interest of several state news outlets, this magazine included. As were the Burkes, who are staying on as consultants, Mr. Chapman sounds like the perfect innkeeper, a “banjo-plucking host, full of stories and bubbling cheer,” according to Jeff Burke. There is currently no other inn on Isle au Haut, so the reopening of the Keeper’s House should provide a boost to tourism and economic activity in this small community. Sounds like a good solution all around. Conclusion Well, this is a big month on Capt. Pete’s calendar: the Maine Boatbuilders Show, the coming of spring, and the Equinox itself, making the days now longer than the nights, and the annual change-over to clear liquor. So keep an eye on your brown-liquor stocks; no need to carry over too much until September. It’s simply “bad form,” as my friend Samuel W. Johnson would say. All your friends who yachted south Must soon now swing their bows about And start the dreaded northward ride To colder water and swirling tide. Not so bad this journey though We start it toward a land of snow Melt-water spreading into bays Call men and fish on their ways. Soon we’ll sit on creaky rockers Freshly filled our liquor lockers The smells of summer wafting heady Feet up, binoculars at the ready.