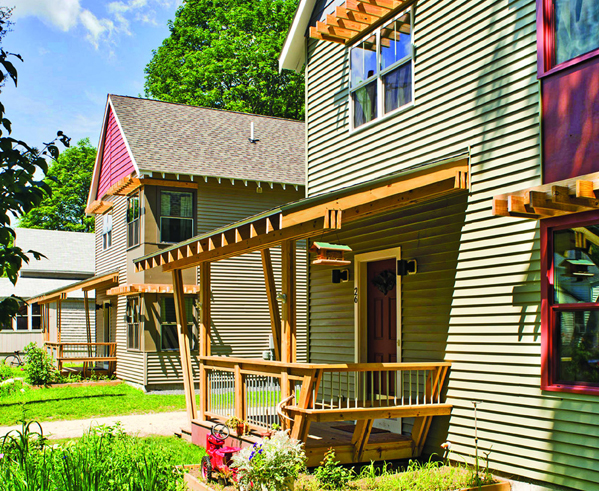 Two homes on Peaks Island were among the first produced as a result of a partnership between Portland architects Kaplan Thompson and modular home builder Keiser Homes. The houses are designed to be inexpensive to build, yet highly energy efficient. Photographs by Magnus Stark courtesy Kaplan Thompson (2)
By Janet Mendelsohn The first night the Schuit family spent in their new modular home on Peaks Island last February, their then 6-month-old daughter slept through the night for the first time. “Coincidence? Maybe,” said Kelli Schuit. “But it’s a very quiet house. We haven’t been here an entire winter, so we don’t yet know how much we’re saving without oil, but we turn off the heat after a few hours and it stays warm. We did the same with the AC and it stayed cool.” The Schuit’s home is the result of a partnership between Portland architectural firm Kaplan Thompson Architects and modular homebuilder Keiser Homes of Oxford. It’s one of a series of nine so-called net zero energy models offered under the name of BrightBuilt Home. So far six of the houses have been built using modular construction and several more using traditional “stick” construction. Interest in the concept has been high, said Keiser Homes sales manager Joe Martin. Half the calls coming in to his firm recently have been queries about BrightBuilt models.
We asked ourselves, if we wanted to build a highly efficient building that was sustainable and beautiful, what would it look like?
Net zero energy buildings are capable of generating more power annually than they need for their own heat, hot water, air conditioning, and appliance demands. Many net zero buildings are connected to the power grid, so surplus energy generated by their photovoltaic solar panels on sunny days can be fed to the grid and borrowed back at night and during overcast weather. Passive considerations, such as southern exposure, natural daylight, water-saving features, triple-glazed windows, and more insulation than most homes help improve efficiency. Such efficiency can yield substantial savings over the lifetime of a building, but the initial cost of components, including non-toxic materials and especially solar panels, can be high. The BrightBuilt Home models can be traditionally stick built; custom designed; or, for the do-it-yourself builder/contractor, purchased as plans only. But what really excites the architects at Kaplan Thompson is the combination of the energy efficiency and modular construction, said architect Phil Kaplan. Because they are modular, these homes cost much less than a custom-built net “green” home. The hope is they will appeal to buyers who may not have been on the market for a net zero building, Kaplan said. Sections of these homes are built in a climate-controlled factory, which takes weather out of the equation. “That’s tremendous in this climate,” Kaplan said. “The schedule is more predictable so clients know how long their project will take.” It also means completion on site is faster, which keeps costs down. 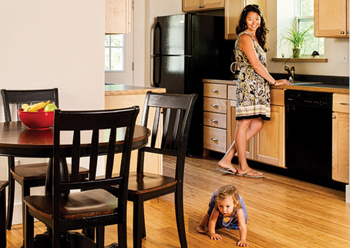 Kelli Schuit moved into a BrightBuilt home on Peaks Island last winter. The househas proven to be very energy efficient as well as bright and sunny.
Keiser and Kaplan Thompson began collaborating after the architectural firm completed its first net-zero project in Rockport: the so-called BrightBuilt barn for Rockport physician Keith Collins. The firm won a national LEED award for innovation for its work on the building. LEED, which stands for Leadership in Energy and Efficient Design, is a nationwide green building program that recognizes strategies to lower operating costs; conserve water, energy and other resources; be safer and healthier for occupants; and qualify for tax rebates, zoning allowances and other incentives. The Rockport project began when Collins engaged Kaplan Thompson to build a green home office and artist studio for his wife. “KTA and I then decided to come up with a method for creating green buildings and innovative ideas,” he said. “Buildings consume fossil fuels and Maine has one of the highest carbon footprints of any state because we use oil to heat them. We asked ourselves, ‘if we wanted to build a highly efficient building in Maine that was sustainable and beautiful, what would it look like?’ That was BrightBuilt Barn.” Collins collaborated with Kaplan Thompson on another, subsequent project. Impressed with BrightBuilt Barn, Keiser Homes approached Kaplan Thompson to design a line of net zero modular homes. The firms partnered on the design and construction of two prototype homes for Peaks Island Home Start, a volunteer organization dedicated to affordable housing, and eventually teamed up on nine net zero energy home designs in all, ranging in price from $160,000 to $325,000. Those prices include plumbing, appliances, and other fixtures, but not the land under the homes or the site work. “This is not design/build,” Kaplan said. “It is more architect-led, designed more for comfort, durability, and low energy as well as looking good. The relationship to the sun, types of shade and of windows all are part of a holistic model. Airtight and well-insulated, they’re not the leaky old houses we’re used to [in New England].” N Contributing Editor Janet Mendelsohn is the author of Maine’s Museums: Art, Oddities & Artifacts, and is a Boston Globe correspondent. She lives in Concord, Massachusetts. For More Information: Keiser Homes 56 Mechanic Falls Road, Oxford, ME 04270 888-333-1748; www.keisermaine.com Kaplan Thompson Architects 424 Fore St., Portland, ME 04101 207-842-2888; www.kaplanthompson.com and www.brightbuilthome.com