Pleasure boats docked alongside the Chandlers Wharf Condominiums on the left, share the waterfront with lobsterboats tied up at Widgery Wharf on the right. Photographs by Robert F. Bukaty (4)
By Clarke Canfield Walk along Commercial Street on Portland’s waterfront, and here’s what’ll jump out at you: People. Lots of people. Commercial Street—particularly from June through October—is a bustling place, full of life, with more restaurants, more shops, more cruise ships, more tour buses, and more sightseers than 10 or 20 years ago. Keith Nuki, who owns a company that gives tours of Portland in a refurbished 1971 fire truck, has watched the changes unfold in the dozen years he’s been working on the waterfront. “People,” Nuki said, “have discovered Portland’s waterfront.” Portland is the home to Maine’s largest and most diverse harbor, with Portland on one side and South Portland on the other. But Portland’s waterfront, of course, isn’t all about tourists and bistros and sidewalk vendors, or office employees going to work. It’s also about fishing boats, seafood processors, boatyards, lobster bait, and all the other things that put the “work” into the “working waterfront.” A key word these days is balance—finding the right mix between marine and non-marine uses. With zoning regulations loosened up in recent years to allow for more non-marine uses on the 15 or so piers that make up the central waterfront, there are more non-marine companies doing business here than in decades past. At the same time, the working waterfront is still chugging along. 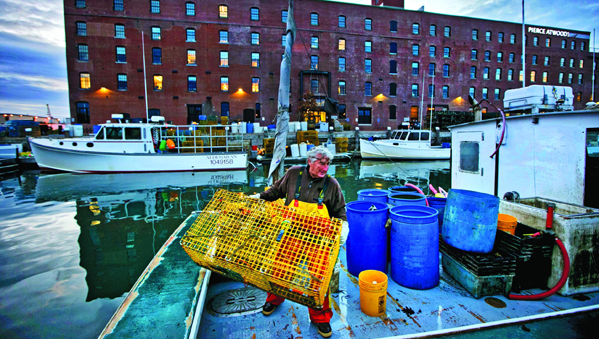 Lobsterman Skip Werner of Cumberland, Maine, captain of the Foxie Lady, unloads traps on Union Wharf. The Pierce Atwood law offices occupy a former cannery on Merrill’s Wharf (background).
Nick Mavodones, who’s in charge of operations at the Casco Bay Lines ferry service, remembers when railroad tracks ran down the middle of Commercial Street and trucks would back up to a meat packer at the foot of Union Wharf in a space that later became a seafood processor, and is now a restaurant and microbrewery. “There’s a balance, an equilibrium you have to find, and it changes over time,” Mavodones said. Nowadays, declines in commercial fish catches means fewer fishing boats bring their catches of cod and haddock to port here, and fewer businesses sell gear and supplies to those boats. The Bath Iron Works floating dry dock, a fixture along the waterfront’s east end for nearly 20 years, is long gone, and so are the massive oil rigs that were constructed here a decade ago, creating hundreds of jobs and pumping money into the economy.
The building, and its suit-and-tie lawyer crowd, is surrounded by fishing-related activities.
But you’ll still find plenty of lobsterboats and dealers and a growing lobster bait industry that serves as a regional bait hub. There are wharves where pallets are stacked high and men walk about in orange oilskins and rubber boots. You’ll find a new deep-water pier for cruise ships that opened in 2011. The on-again, off-again container cargo shipping service is on again, this time with an established Icelandic company, Eimskip, which offers direct routes to Europe. The success of the waterfront rests largely on how the two worlds of those who make their living from the sea and those who don’t live side by side. “I don’t think the festival waterfront will displace the working waterfront. I think they can co-exist and are co-existing,” said Tom Valleau, the city’s waterfront director through the 1980s and 1990s who is now executive director of the North Atlantic Ports Association. “That mix is what makes the Portland waterfront attractive to me. It’s not 100 percent industrial with cranes and 18-wheel trucks. And it’s not 100 percent T-shirts and taffy. It’s a very stylish mix of wonderful restaurants and shops, and we still have the cruise ship trade, the container cargo trade. We still have our groundfishing trade and the lobster trade. There’s an authenticity about the waterfront that’s enduring.” 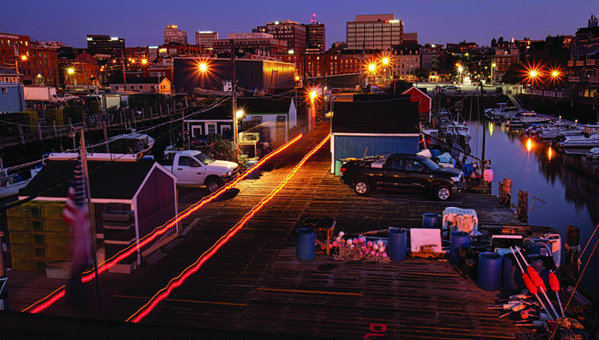 While most of Portland still sleeps, a delivery truck leaves a trail of light as it backs down Widgery Wharf pick up a load of lobster from Free Range Fish and Lobster.
An example of that shoulder-to-shoulder co-existence can be found on Merrill’s Wharf, which is defined by a massive, five-story brick building that sat largely vacant and boarded up for decades. After the city loosened its zoning in 2010 to allow more non-marine uses in waterfront buildings, the Pierce Atwood law firm fixed up the building and made it its headquarters, with nearly 100 attorneys. The building, with its suit-and-tie lawyer crowd and Mercedes, Lexus, and Volvo cars parked out front, is surrounded by fishing-related activities. Dropping Springs Bait Company is located at the end of the wharf, with forklifts, herring pumps, and lots of squawking seagulls flying overhead and loitering in the parking lot. Behind the firm are three seafood processors, next to which is a so-called net yard, a large space at the water’s edge where fishermen can spread out and repair their nets. “I think the people who thought you either have to have all office and restaurants and retail use or all working waterfront and commercial use because the two don’t mix together have proven to be mistaken,” Valleau said. “They do mix together.” The waterfront has decades of ups and downs under its belt. Most would agree it’s now in an up cycle, with both the marine and non-marine sectors poised for growth. On the marine side, ferry service between Portland and Yarmouth, Nova Scotia, is expected to resume in 2014 after a four-year hiatus. Shucks Maine Lobster is planning to set up a processing plant on the east end of the waterfront. Plans also are in the works for Portland Yacht Services to move its shipyard that offers boat repair, storage, and service from its current site off Fore Street near the Old Port to a vacant 23-acre parcel adjacent to the International Marine Terminal and Casco Bay Bridge on the west end of the waterfront. 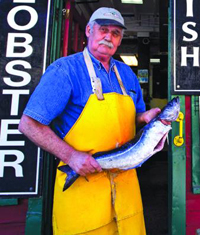 Buzzy Dow poses with a pollock at the Harbor Fish Market on Custom House Wharf in Portland.
On the non-marine side, a new Marriott hotel is under construction on Commercial Street, and a Hyatt is being built one block inland, on Fore Street in the Old Port. This past summer, a new restaurant, Boone’s Seafood and Oyster House, opened in the spot that for more than a century housed the old Boone’s Restaurant, an iconic seafood house that was said to be the birthplace of the baked stuffed lobster. As for the infrastructure, repair work is ongoing to upgrade two of the more shabby piers, with a long-downtrodden building on one of them scheduled for a makeover, which will provide space for both marine and non-marine functions. There’s good reason why the American Planning Association named Commercial Street one of the nation’s great streets a few years ago in its Great Places in America program, said Bill Needelman, waterfront coordinator for the city of Portland. In giving the award, the association said that Commercial Street “blurs the distinctions among working waterfront, downtown main street, and historic tourist district.” “Tourism and retail activity on Commercial Street is certainly expanding and the rezoning will allow for that continual expansion,” said Needelman. “What we hope to see is that the increased activity will result in investment in the piers, which will benefit marine activity and berthing.” Clarke Canfield has been writing stories about Portland Harbor and the Maine coast for more than 25 years for The Associated Press, the Portland Press Herald, National Fisherman, and other publications. New Home for Portland Yacht Services Portland’s waterfront dynamics were shaken up a bit last summer with the announcement that Phineas Sprague, Jr., had sold the sprawling Portland Company Marine Complex on the east end of the waterfront to a Yarmouth-based development company, CPB2, for an undisclosed price. Sprague’s marina will remain at the Portland Company complex for now, but he’s planning to move his vessel-servicing and storage operations to a long-vacant 23-acre parcel on the west end of the waterfront. There, he plans to develop what will be known as Canal Landing, a state-of-the-art expanded version of Portland Yacht Services that will be able to accommodate large commercial vessels up to 1,500 tons. The goal is to have a new 20,000 square foot storage building on the new site up and running by early 2014. To facilitate his move, Sprague purchased Gowen Marine, a fixture on Commercial Street for more than 50 years. The purchase allows him to continue operating the marine business and servicing larger vessels, while he develops the new facility. Gowen Power Systems, the generator company, remains under the same ownership. Boat lovers know the Portland Company complex as the home of the annual Maine Boatbuilders Show, which brings together custom boatbuilders with manufacturers of boating equipment, powerboats, sailboats, canoes, and other types of watercraft. Sprague said the show will be held at the current site for at least two more years and, he hopes, even after that, if the complex’s new owners continue to hold events at the property. If the Portland Company complex becomes unavailable for the show after 2015, Sprague said that he will find a new home for it. The 2014 show is slated for March 14, 15, and 16. —CC