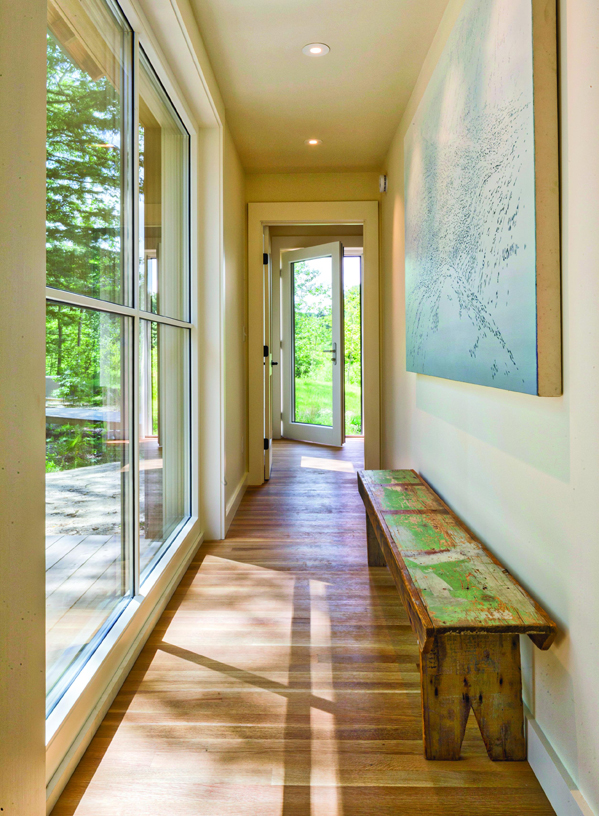 The wall in the south-facing entry is made from solid masonry, which absorbs the sun’s heat during the day and releases it at night.
By Bruce D. Snider Photos by Brian Vanden Brink On waterfront houses of a certain age, Maine’s shoreland zoning ordinance confers something akin to eternal youth. Buildings that are too close to the water’s edge to be permitted today are allowed to remain, but can never be substantially enlarged. Thus, the humble, grandfathered cottage is continually rebuilt, like George Washington’s proverbial axe, until nothing original remains but an idea. This waterfront home in Falmouth seems a perfect case in point. There’s more here than meets the eye, though, both in the owner’s relationship with the site and in the house he remade here. 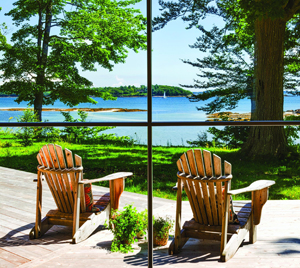 The homeowner wanted to rebuild the house in its original footprint to preserve the stunning view of the water.
“I grew up on the neighboring property,” said the owner, whose parents still live there in the stately house that his great-grandfather built at the turn of the twentieth century. As a youngster, he would walk down to the shore to visit a favorite aunt and uncle. While theirs was a humbler abode—a cottage that his grandfather moved to the site in the 1950s—it sat within steps of Casco Bay, looking east toward Clapboard Island. After college in Maine, the owner’s career led him around the country. When he returned to Maine in the early 1990s, he rented the cottage from his cousins. In 2003 he bought it outright. Low and lightly built, the cottage had grown over the years into a lopsided Y-shaped layout, and the whole ramshackle works was now well past its expiration date. “I was nursing it along,” the owner said. “I knew for quite a while that I would have to start over.” An environmentalist with a passion for the native ecology of his land, he saw the necessity to rebuild also as an opportunity to align the house with his principles. That’s what led him to G-O Logic, the Belfast-based architecture and construction firm that pioneered the ultra-efficient Passive House methodology in Maine. If you handed these guys George Washington’s axe, they’d give you back a web-enabled tree-surgery instrument that leaves no chips and monitors its own energy use. 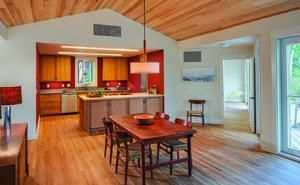 The kitchen is compact to allow the new construction to conform with the old footprint.
Zoning officials approved a plan to replace the old cottage entirely, but only on its existing footprint. That was fine with the owner, a man of simple tastes more interested in restoring the natural world than in building one of his own. “He wanted to recreate [the original house],” said architect and G-O Logic partner Matthew O’Malia. Efficiency and maintenance issues notwithstanding, “he liked his house.” And as O’Malia came to see, there was actually a lot to like. The floor plan was eccentric, but the way the building threaded between the site’s mature trees, orienting toward woods, field, and open water was “really quite sublime,” he said. To minimize site disturbance, O’Malia specified a concrete slab foundation for the replacement structure. Heavily insulated, 14-inch-thick walls consumed nearly all of the 30 percent allowable increase in building volume. A roof framed with scissor trusses holds an even greater charge of insulation, while also creating shallow cathedral ceilings. An air-source heat pump is backed up with electric baseboard heat. With sensors built into the house, the owner said, “I’ll be able to go online and see how much energy the house is using.” Given the house’s super-efficient shell, it won’t be much. 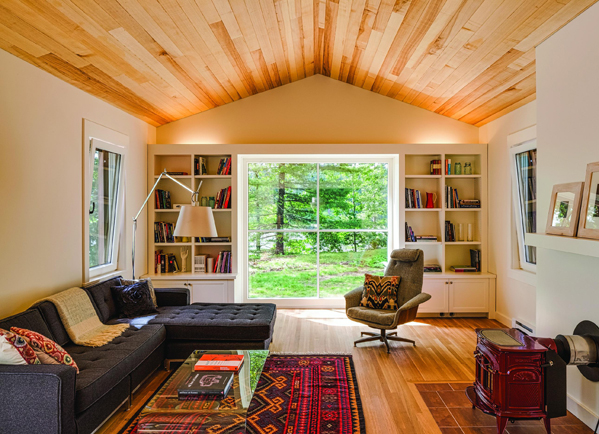 The house features one large open living space with the kitchen at one end and a south-facing window and living room at the other end. The two bedrooms are in two wings extending off the main living space.
Oak floors and ash-plank ceilings add warmth to an austerely simple interior, but the major amenities here are natural light and outdoor views, which the building manages masterfully. A seven-foot-square window fills the living room’s south-facing gable wall, generating an appreciable amount of solar gain. A concrete partition wall stores excess heat from a similar window that faces south, protecting the entry hallway from late-day overheating. Roof overhangs and retractable exterior blinds shade the east-facing glass, O’Malia noted, “so you can have the view but not have the air-conditioning load.” 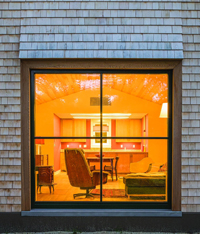 Looking in the south-facing living room window. All the windows are extra efficient, triple-glazed windows from Germany.
While the beauty of that east-facing view would be lost on no one, it carries special meaning for the owner. “When I think about home, I’m connected to the land,” he said. The sunrise prospect across Casco Bay ties him to his family and his past. “I have good memories of it; it’s a beautiful spot,” he said. The experience can only be heightened by a subtle awareness that his new house encloses an old and beloved space—another oddly poetic gift of shoreland zoning. Bruce D. Snider is a writer and editor with a background in residential architecture and construction. He lives with his family in Belfast. For More Information: G-O Logic 137 High St., 3rd Floor, Belfast, ME 04915 207-338-1566; www.gologic.us