By Rob McCall
“Crystals grew… like arithmetic flowers, they lengthened and spread, added plane to plane in an awed and perfect obedience to an absolute geometry that even stones—maybe only stones —understood.” -Annie Dillard Dear Friends:

Illustration by Candice Hutchinson
Despite several hard frosts, a bluebell is still blooming out back and there are even dandelions in sheltered places. Wind and weather flowing from the southeast hold off the polar cold north of Hudson’s Bay waiting for its chance to charge down on us like the Great Bear. Meantime, you’ll see a lot of smiling faces in these parts as the fine fall weather goes on and on. There is a way in which each season forgives the faults and failures of the one before. If summer was too dreary, autumn forgives with warm days and nights. If winter was too cold, spring waltzes in with balmy breezes. If spring is too wet, summer parches. Likewise, wounds heal and bones knit themselves back together. Tainted water is drawn by the sun into the vast distillery of the clouds, where it is purified to fall as pristine rain. And so it goes. Nature does not want to hold a grudge; she wants to forgive. She wants harmony more than discord and balance more than revenge. Shall we want any less? Natural events, November With Thanksgiving ahead, turkeys both wild and domestic are very much on our minds. The wild turkey is a conservation success story. Once plentiful throughout the northeast, they were hunted out by the early-19th century. In the mid-20th century, populations of wild turkeys were started from southern stock and now the wild turkey is a common sight in Maine, where the flock is estimated at more than 60,000. Free-range domestic turkeys are being raised in many places in Maine including the old Putney farm on Leighton Neck in Pembroke, which is within gobbling distance of the Awanadjo Almanack Cobscook field station. We can hear the chanting of contented toms and hens when the wind is right. 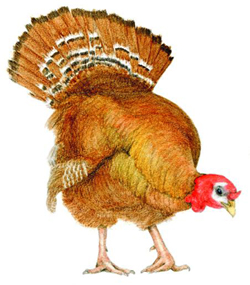 Illustration by Candice Hutchinson
Your commentator saw a huge wild tom turkey run across the road, looking nearly as big as an ostrich with a red head and wattles and stiff black bristles sticking out from his chest. Why does a turkey cross the road? To give thanks when it gets to the other side. Gratitude for the turkey. Rank opinion Since the beginning of time, giving thanks has been a regular observance among us. Thanksgiving is also a socially, economically, and ecologically healthy practice because gratitude mitigates greed. We do not destroy what we appreciate. We do not waste or ruin what we are thankful for. We do not hoard what is not ours. All ancient people knew this, and universally expressed thanksgiving in their spiritual practices. What we call the “First Thanksgiving” was not the first at all, but just one more of millions. This is not simply some lofty sentiment. Gratitude is hard-wired into the human soul. That is how humans lived sustainably on the earth for millions of years. And that is why a simple meal eaten gratefully is far more satisfying than the richest feast eaten mindlessly. Gratitude for it all.
Free-range domestic turkeys are being raised in many places in Maine, including the old Putney farm on Leighton Neck in Pembroke, which is within gobbling distance of the Awanadjo Almanack Cobscook field station. We can hear the chanting of contented toms and hens when the wind is right.
Natural events, December The first real snow of the season dusted our towns this past week with a thin cushion of white: billions on billions of tiny flakes, all variations on the theme of a simple six-pointed fallen star, yet no two alike. The plowmen did their good work clearing roads and driveways so quickly that we hardly noticed. Soon enough, crystal icicles descended from the eaves to drip rhythmically and throw rainbow rays when the sun struck, then turn white and silent as evening came. We could see deer tracks in the orchard where white-tails had poked their noses under the snow for frozen apples. The snow brought many visitors to our birdfeeders. We had countless chickadees, one white and one rose-breasted nuthatch, three juncos, four titmice, five purple finches, and six crested cardinals, though there was nary a partridge in the pear tree. By the road, half a dozen hairy woodpeckers and one downy decorated a snow-laden white ash tree like bright woodland sprites. Rank opinion Ancient myths and legends so abound at this season that it is hard to know what’s true and what isn’t. The oldest Biblical accounts include no nativity tales, no angels, no wise men, no stable, and no date of Jesus’s birth. December 25 was borrowed from the pagan Saturnalia and solstice celebrations. Our roly-poly Santa Claus is a 19th century makeover of the 4th century St. Nicholas who brought gifts to poor children. Flying reindeer didn’t pull Santa’s sleigh until Clement Moore’s famous poem “The Night Before Christmas” in the mid-1800s. Rudolph the Red-nosed Reindeer didn’t show up until the 1930s. Myths can be bad when they override common sense and when we worship the myths themselves rather than the wisdom behind them. But myths can be exceedingly good when they awaken our hearts to joy, wonder, reverence, and compassion for Creation, as all good myths will do. Children need good myths for their hearts and souls to flourish. So do adults. Natural and un-natural events, January Maybe you remember a quote from Tom Robbins about the stunning and all-pervasive power of water that goes something like this: “Water invented life so it could walk around.” Could be. Water is the defining element of our planet. The past few weeks have given us an expansive new view of the powers and manifestations of water. Water in so many forms—ice crystals and snow crystals, ice sheets and icebergs and ice floes, sleet, raindrops, water vapor, clouds, mist, fog, frozen fog, and sea smoke—nearly every form water can take, we have seen. And of course, we have seen water walking around. Even when we look in the mirror we are seeing water, because we are, after all, two-thirds water, salt water. We are water thinking about water, water conceived in water, gestated in water, and born in water. Rank opinion 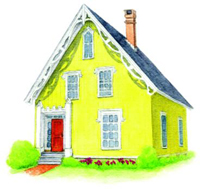 Illustration by Candice Hutchinson
When all of that water on the house thaws, it all too often backs up behind ice dams and runs up under the shingles, through the roof, and down inside the walls. Water will find a way. We hear about leaky roofs on homes, businesses, schools, and many other buildings. So many of these have flat roofs that one wonders why in blue tarnation anyone in their right mind would construct a building with a flat roof in Maine. The old-timers knew that the vagaries of a Maine winter called for a steeply pitched roof to shed it all. If you are ever on a building committee for a new school or church or any other building to be constructed anywhere in Maine, do not let any doe-eyed California architect or slick out-of-state contractor sell you a flat roof. Do not listen to their patter about new technologies that will keep the water out. Insist on a pitched roof, and never regret it. Mountain report It’s a well-known truth around here that the mountain looks a little different each day through the seasons. A subtle change in celestial light or earthly color, a thickness in the air or a clarity there, can alter her expression just enough to fit the day. Many days she is decorated with tatters of mist, like the dance of the seven veils enticing us to look more deeply at her. A recent climb up Awanadjo—Blue Hill or “small misty mountain” in the Algonquian language—found your commentator actually breaking the trail in several places. There was very little sound or activity on the mountain, just one tiny bird about the size of a wren scooting up the tree trunks and flitting off to another with a bright piping whistle.
Myths can be bad when they override common sense and when we worship the myths themselves rather than the wisdom behind them.
Seedpods to carry around with you From Tecumseh, Shawnee Pan-Indian leader, 1768-1813: “When you rise in the morning, give thanks for the light, for your life, for your strength. Give thanks for your food and for the joy of living. If you see no reason to give thanks, the fault lies in yourself.” From the Tao Teh Ching, circa 600 BC: “The highest form of goodness is like water. Water knows how to benefit all things without striving with them. It stays in places loathed by all men. Therefore, it comes near to the Way.” From Red Hawk, the Maine Abnaki woman poet: “Snowfall, slow fall of so many crystalline pieces; snowfall of a thousand footsteps; slow, sure descent, rhythmic it is. Snow falls on everyone equally... Thoughtful, snow is, as on everyone so equally.” From Henry David Thoreau’s journal, winter 1856: “The thin snow now driving from the North lodges on my coat. How full of the creative genius is the air in which these flakes are generated. I could hardly more admire if real stars fell and lodged on my coat.” From Andrew Wyeth (1917-2009): “I prefer winter... when you feel the bone structure of the landscape. Something waits beneath it; the whole story doesn’t show.” That’s the almanack for this time. But don’t take it from us—we’re no experts. Go out and see for yourself. Yr. Mst. Hmble & Obd'nt servant, Rob McCall Rob McCall lives on Moose Island. This almanack is excerpted from his weekly radio show, which can be heard on WERU FM (89.9 in Blue Hill, 99.9 in Bangor) and streamed live via www.weru.org. His latest book, Great Speckled Bird: Confessions of a Village Preacher, is available through your local bookstore.