Touring Down East, across the border 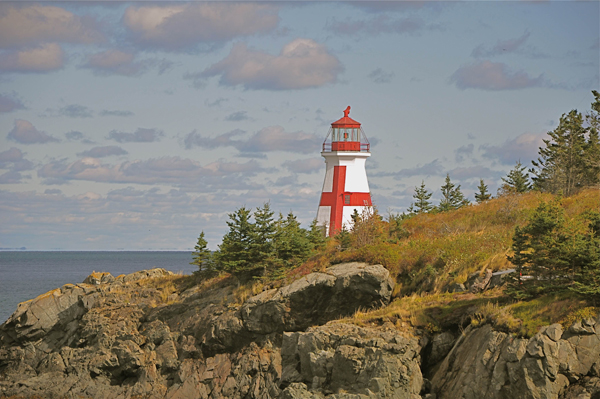 Lighthouse on Campobello Island. Photo by Peggy Forster.
By Lee Wilbur A bumper sticker occasionally seen around Hancock and Washington Counties reads “Life Begins East of Ellsworth.” It’s true, the further east one travels, the more beautiful and picturesque the coast becomes. Though technically not a part of Maine, a majority of Campobello Island lies within an extended International Boundary between Canada and the United States and those of us who often travel down east regard the island as a delightful cousin. Located at the entrance to Passamaquoddy Bay, Campobello is named for Lord William Campbell, an early British governor of Nova Scotia. 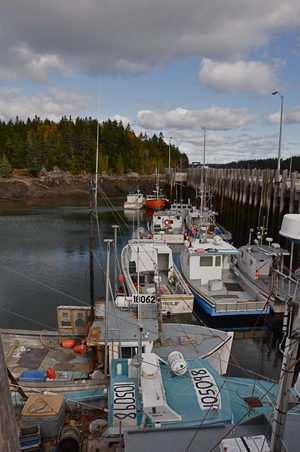 Fishing boats at Campobello Island. Photo by Peggy Forster.
You must pass through Customs in Lubec before driving over the Franklin D. Roosevelt Memorial Bridge to Campobello. New border crossing regulations require a passport or passport card. The island’s visitor information bureau overlooks Lubec and its picturesque waterfront to the west, and Fundy Bay to the east. Glensevern Road leads from the information center’s parking lot to the southern entrance of Roosevelt Campobello International Park. Entering the park in this manner allows for a more circular route for sightseeing. First stop is “The Toad” parking lot on Fundy Bay, which looks towards Grand Manan Island, the vast Atlantic Ocean, and a huge rock formation resembling a giant toad. Adjacent to the parking lot is a well-marked cliffside trail around Ragged Cove (great spot for beachcombing) and out to Liberty Point and a sun dial called “Sunsweep” that was sculpted by David Barr and is well worth the short walk. 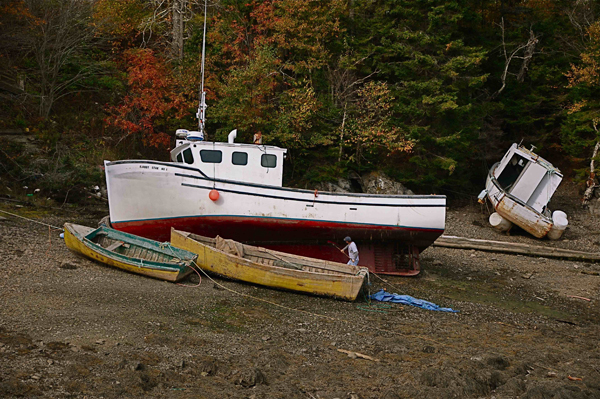 Low tide at Campobello Island. Photo by Peggy Forster.
The drive continues through moss-covered wooded areas, past the parking lot for Con Robinson's Point and on to Herring Cove, surely the most spectacular rock beach in the Northern Hemisphere. Driving away from the beach there's a well-executed nature walk less than a mile from the main entrance to Roosevelt Campobello Park and the site of the Franklin Delano Roosevelt’s summer home. Here also is a fun 1.2 mile round-trip walk out to Friar's Head with a sweeping vista of Passamaquoddy Bay. Campobello Golf Course, a popular nine-hole course, is located just a few miles north on Herring Cove Road off Route 774, the main road bisecting this 30-square-mile island. One of the island’s more stunning attractions is Head Harbor Passage with its six-knot tidal current. The panorama includes the drama of swooping birds, occasional dolphin and whales breaking water, schooners and fishing vessels. Head Harbor, a hurricane hole and a stop not to be missed, boasts a large working fleet of lobsterboats, trawlers, sardine carriers and lobster cars. Here one can understand the drama of the 40-foot tidal drop, especially at low tide. On the eastern side of the harbor is a floating dock marina, servicing coastal cruisers as well as locals. At the north and terminal end of Route 774 is the East Quoddy Head Harbour Light. Here at the confluence of the Atlantic Ocean and Passamaquoddy Bay, minke, humpback, finback, and northern right whales can be spotted from shore as they roll and blow and often jump in a feeding frenzy in these nutrient-rich waters. At low tide, a short trail over the rocks and seaweed leads to the lighthouse. Sightseers should keep a close eye on the tide to avoid being stranded. Salmon pens, a now vital part of Campobello's ocean-oriented economy, are very much in evidence in the island’s west-facing coves and harbors. Accommodations on the island are available, as are limited dining opportunities. Rooms and dining are also readily accessible across the bridge in Lubec. Visit this beautiful island once and you'll want to return again and again. 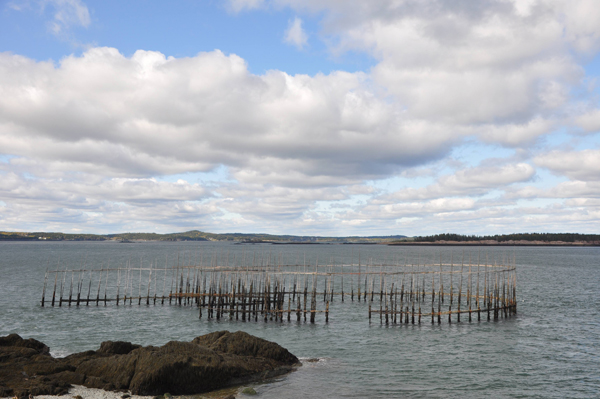 Weir on Campobello Island. Photo by Peggy Forster.
Lee Wilbur, a freelance writer, is the retired founder of Wilbur Yachts of Southwest Harbor. He now divides his time between Florida and Maine.