Paintings that celebrate the sea and ships 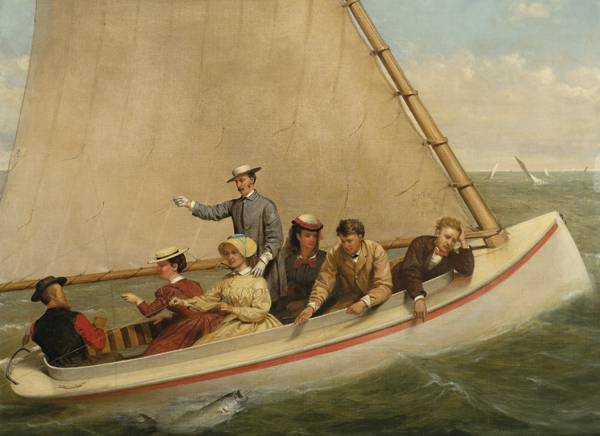 This image of fishing in a catboat in Great South Bay, Long Island, 1871, painted by Junius Brutus Stearns, is rare because it includes women. The colorful clothing of the tourists distinguishes them from their soberly attired guide at the helm. Images courtesy New-York Historical Society.

By Carl Little | Eye on the Coast In one of those fortuitous loan arrangements that museums are increasingly involved in these days, the New-York Historical Society has sent an impressive array of its marine and maritime art holdings, mostly 19th century, to the Portland Museum of Art for the winter. The exhibit, “The Coast & the Sea: Marine and Maritime Art in America” offers an excellent opportunity to take in ships, seascapes, and portraits by a top-notch lineup of painters. There’s also a clutch of sea-going artifacts, among them a spyglass and a Commodore Decatur snuffbox. For naval warfare aficionados, paintings of sea battles abound. Thomas Buttersworth included the splash of cannonballs in his dramatic Escape of HMS “Belvidera” from the U.S. Frigate “President” painted around 1815. Julian Oliver Davidson’s Battle of Mobile Bay, 1886, provides a bird’s-eye view of the famous Civil War clash when Admiral Farragut’s fleet of ironclads came under attack and he is said to have roared, “Damn the torpedoes! Go ahead full speed!” 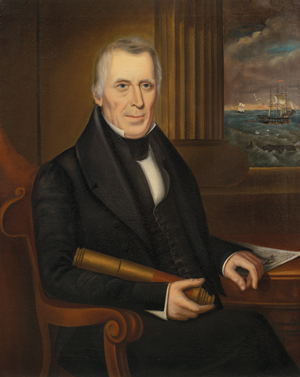 True to his unusual name, Preserved Fish made a living from the sea, starting in New Bedford, MA. He later became a leading merchant in New York. This circa 1830 portrait is by an unknown painter. Images courtesy New-York Historical Society.
When viewing the show, note the diverse ways in which painters have rendered the sea. In Thomas Birch’s handsome New York Harbor, 1831, turquoise waves move diagonally across the canvas. In a shipwreck scene by Mauritz de Haas, the sea is whipped to a mean lather, while Francis Augustus Silva preferred his seas flat. The geographic range of the work in the show is primarily the Atlantic coast (alas, no Maine), with special focus—fittingly, considering the collection’s origin—on New York City and vicinity. The French artist Victor de Grailly, who painted the splendid view of Passamaquoddy Bay that Maine philanthropist Elizabeth Noyce owned, is represented by two bucolic Hudson River panoramas. Fishing in a Catboat in Great South Bay, 1871, by Junius Brutus Stearns, is the picture of leisure as ladies and gents jig their lines. In one of a pair of painterly views of Castle Garden at the tip of Manhattan by Jasper Francis Cropsey, the fortress-turned-theater near the Battery where the Marquis de Lafayette was once honored, is bathed in moonlight. Speaking of Lafayette, L’Hermione, the frigate he sailed on in 1780 when he came to America’s aid during the Revolution, has been painstakingly replicated and will be sailing into Castine on Bastille Day, 2015. Hopefully, there will be painters on hand that day. Carl Little’s most recent book is William Irvine: A Painter’s Journey (Marshall Wilkes). “The Coast & the Sea: Marine and Maritime Art in America,” on view at the Portland Museum of Art through April 26, 2015, is accompanied by a catalog by Linda S. Ferber, senior art historian at the New-York Historical Society.