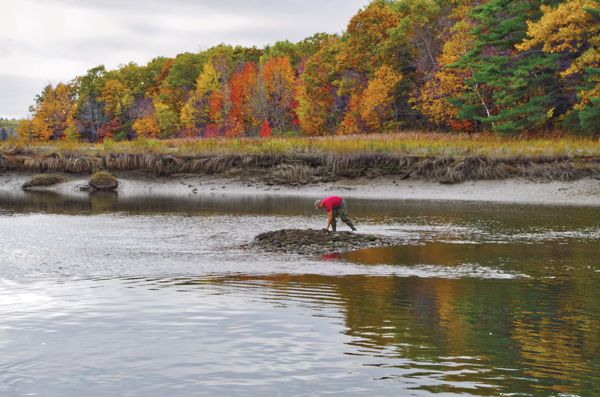 Researcher Dana Morse searches for native oysters at the outlet of Sherman Marsh in Newcastle, where the oyster population may date back to the last ice age. Photo by Catherine Schmitt

Although the Eastern oyster (Crassostrea virginica) is native to Maine, the state is known for its cultured oysters. If current trends continue, however, two populations of wild bivalves could soon share the stage. Researchers have begun studying isolated oyster grounds in the Sheepscot River that may date back to the last ice age. Meanwhile, as the aquaculture industry has grown and coastal water temperatures have warmed, cultured oysters have begun to multiply on their own elsewhere, particularly in the brackish waters of the Damariscotta River.

If the midcoast is Maine’s oyster country, then Damariscotta is the capital. Since the University of Maine and Darling Marine Center began oyster culture research and development efforts there in the 1970s, the industry has grown to nearly 20 companies, mostly concentrated in the Damariscotta, with an annual harvest worth $2 million. In the industry’s early days, Maine water was too cold for oysters to spawn naturally. Like their terrestrial counterparts, marine farmers had to buy their oyster “seed” annually. A handful of hatcheries around the state raised the oyster seeds, called spat, to quarter-inch size, which growers then set out in leased areas of coastal waters.

Fast-forward to recent years. Thousands of naturally spawned eastern oysters have begun cropping up in the vicinity of more than a dozen aquaculture leases on the Damariscotta. A handful of entrepreneurial former clam diggers have been harvesting them and selling them to chefs from here to New York, who are now putting “wild” oysters on their menus. This is in addition to a small, self-sustaining population of European “flat” or Belon oysters (Ostrea edulis) that are growing in the Boothbay and Harpswell regions, remnants of an effort in the 1950s to culture oysters there. While that population is not large, at least one commercial oyster company, Glidden Point, collects and sells Belons to a small but enthusiastic following of ostreaphiles. 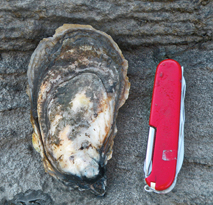 A native oyster from the relict wild population in the Sheepscot River Estuary. Photo by Dana Morse

Jeff McKeen of Pemaquid Oyster Company showed me the Damariscotta’s wild oyster grounds last summer. On an island in the river, not far below the reversing falls, we found oyster shells scattered about the shoreline and live oysters attached to rocks, gravel, and each other. We also saw commercial harvesters working the shoreline with gloved hands and buckets.

Tempting as it might be to forage for wild oysters, both recreational/subsistence and commercial shellfish gathering requires a license. The towns of Newcastle and Damariscotta work with the state to manage the fishery, which currently operates only in the Damariscotta River. In terms of taste, wild is not necessarily better. Cultured oysters are tended in closely monitored conditions. Many growers move their product to locations farther from shore before harvesting to let the oysters filter-feed in cooler, saltier water. Many people (this writer included) prefer the resulting briny, bracing flavor to the murkier taste of oysters gone wild.

Like the water in which they grow, the future of this wild oyster fishery is unclear. For now, aquaculture companies and commercial collectors coexist on the Damariscotta with minimal conflict.

As I researched the expansion of oysters on the Damariscotta, I learned that an even wilder kind of oyster exists in Maine, a survivor of ancient times when native oysters were much more abundant. For a time after the ice sheet melted, the boundary between land and sea was lower than it is today. The Gulf of Maine was a shallow, tide-less lagoon with much warmer water. Such conditions allowed “temperate” fauna like oysters, which had taken refuge in areas to the south not covered by ice (around present-day Virginia), to expand their range. Ten-thousand-year-old oyster shells have been recovered from Georges Bank and the waters around Mount Desert Island. Then sea levels rose, tides developed, and the Gulf cooled, restricting oysters to isolated pockets where habitat remained suitable: the upper reaches of narrow, “current-swept” estuaries like the Piscataqua, Damariscotta, and Sheepscot rivers, according to Peter Larsen of Bigelow Laboratory for Ocean Sciences, who has been researching Maine’s native oyster. There the water stayed warm enough for the strongest oysters to spawn and survive, and was fresh enough to keep out most marine predators.

Two to three thousand years ago, the native Wabanaki people harvested large numbers of oysters in the region, leaving behind giant middens (piles) of discarded shells. Then something happened and the oysters began to disappear. Certainly harvesting was a contributing factor. Scientists also have proposed that continuing sea-level rise brought in colder water and/or marine predators. Environmental changes caused by brick-making yards, sawmills, forest clearing, and pollution also played a role in eliminating oyster habitat.

To get a sense of historic oyster habitat, I accompanied Dana Morse, a marine extension associate at Sea Grant and University of Maine Cooperative Extension to the Sheepscot River watershed. At Sheepscot Falls, we found a few oysters, mostly two-year-old size but some much larger, clinging to rocks. We also looked in Sherman Marsh in Newcastle, and found more oysters crowding the marsh outlet stream, which flows under Route 1 and into the Sheepscot River. Oysters drift as larvae with tides and currents before they settle onto hard surfaces and grow into adults. They moved in to Sherman Marsh Stream after 2005 when the dam holding back Sherman Lake blew out in a storm and salt marsh rapidly returned to the drained reservoir. Oysters are now established on nearly every piece of suitable substrate in the marsh, including ledges, logs, gravel pockets, and miscellaneous debris, according to Morse and Larsen, who wrote an article about it in Northeastern Naturalist, co-authored with Karen Wilson of University of Southern Maine. The scientists estimated that the new marsh increased available space for the ancient oysters by 75 percent. Morse is working with Larsen and Slade Moore to map the wild oyster grounds.

“We want to find other areas where conditions are now right that could be potential restoration sites,” said Larsen. The relict oyster beds provide habitat for other species that became established at the same time: mud crabs, scuds, beach hoppers, and other tiny crustaceans.

Because these wild oysters have been isolated for so long, they may have evolved unique traits for survival. Larsen is anxious to analyze their DNA to determine their genetic relationships to other oyster populations—whether they are unique to Maine, resemble their wild counterparts in the Mid-Atlantic, or have crossbred with cultured oysters. Because Larsen and others are concerned that the cultured oysters that have gone wild may be a threat to the ancient native oyster populations, the emphasis is on protecting these ancient native oysters, both for the habitat they provide and the unique genetics they may represent, rather than for food.

Cultured oysters have begun to spawn naturally in the Damariscotta River, leading to new populations of “wild” shellfish. Photos by Catherine Schmitt (2)

Overharvesting, pollution, disease, and other factors have contributed to the loss of 85 percent of the world’s oyster reefs. Re-building and replenishing these reefs is a common strategy in areas like New York Harbor and Chesapeake Bay, where extensive populations of filter-feeding oysters provide habitat for other species and help maintain water quality.

Knowing that Maine’s coastal waters are only going to get warmer, and thus more hospitable to oysters, Larsen and the other scientists are starting to think about the future restoration of such habitat here. “Native Maine oysters provide valuable ecological services and may provide a genetic resource that could prove a sentinel of climate change,” said Larsen. “Conditions may now be swinging in the oyster’s favor.” Catherine Schmitt is Communications Coordinator for the Maine Sea Grant College Program at the University of Maine.