Who says lakes are just for daysailing? 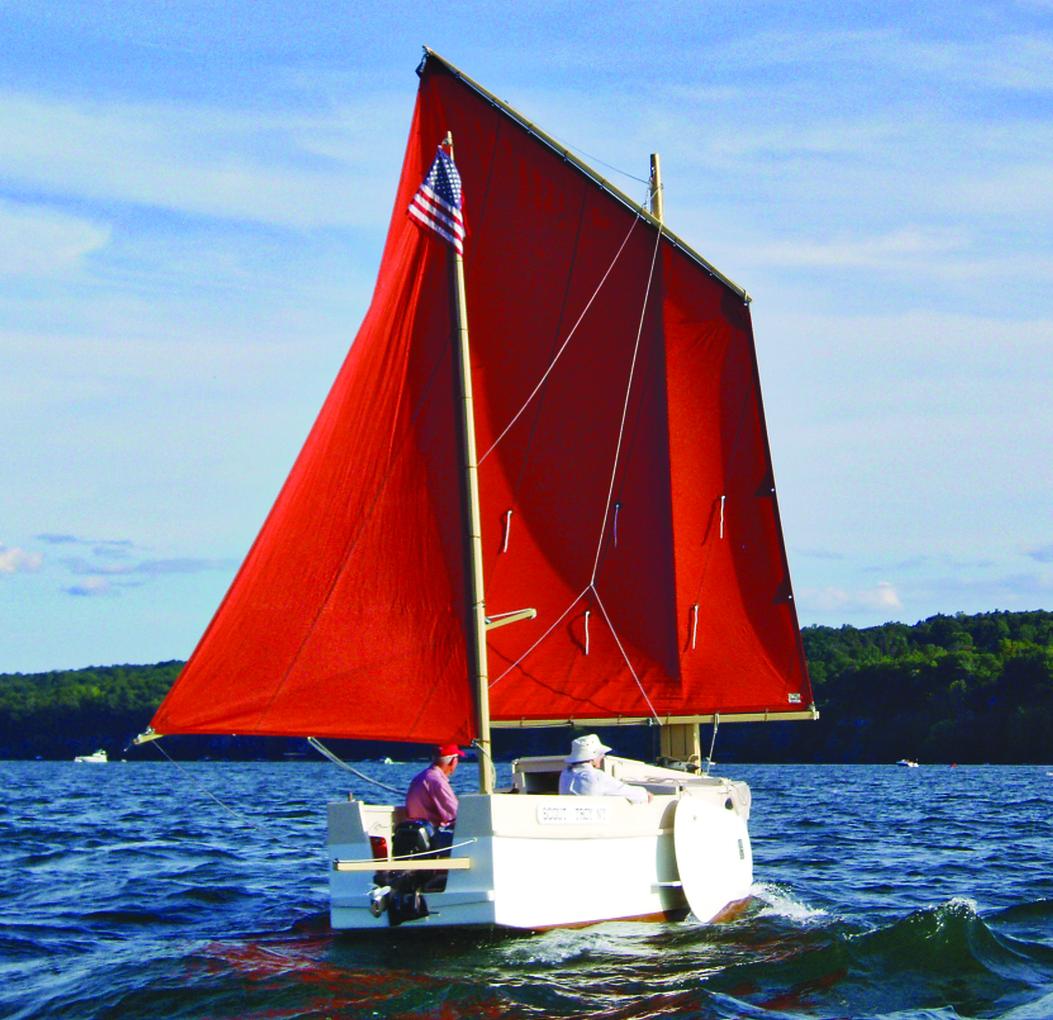 The Lommens’ boat is a Martha Jane, designed by Phil Bolger, and it carries a cat-yawl rig with a sprit-boomed mizzen and a balanced lug main. It features a cabin, generous cockpit, free-flooding anchor well, and an unstayed mast that pivots on a tabernacle. Without a centerboard case, the cabin allows for a big double bunk, lots of stowage, and a modest galley. When I want to think peaceful thoughts I remember a picnic on a narrow beach one early July evening—a quarter-mile-long stretch of beach with small stones that sounded like dimes when I picked them up and let them run through my fingers. There was no sand, just these small, flat stones and a few large rocks the size of a doghouse.

Maine’s saltwater coast may be known for beaches like this, but we were not on the ocean. We were cruising in our sailboat on Moosehead Lake in northern Maine. The biggest lake in Maine, Moosehead is 40 miles long and 118 square miles, with several bays and lots of islands.

My husband and I had returned to this small cove along with our longtime sailing friend, Ted. From our mooring, we could see out into the lake on one side and over a small pond on the other. While we ate, a young bull moose waded into the pond 100 feet away. As he grazed, he came within 30 feet of us before moving along down the pond. We watched him for an hour. The next morning he came back, grazing for another half hour.

Experiences like this make lake cruising special. We are part of a loosely organized collection of shallow-draft cruising sailboat owners (the Shallow Water Sailors) that get together once or twice a year, trailering our boats to a chosen spot around the country and living on them for a few days or a few weeks. The advantage of having boats that sail in shallow water is that we can get close to shore without hitting bottom. My husband and I can pull our 23'6" sharpie, Scout, right up to a beach and be safely out of the wind and waves for the night.

Moosehead is one of our favorite lakes. About halfway up, Mt. Kineo juts majestically into the lake, rising straight up for almost 700 feet. You can hike to the top—there are two well-marked trails. Long ago there was even a steep trail up the cliff face with a secured chain to aid the climb. The view from the flat top is spectacular, especially if you continue up the fire tower. The Mt. Kineo Golf Course, at the base of the mountain, was built as part of a resort in the 1880s. If you don’t have your own boat, it can be reached via water shuttle service from the launch ramp at Rockwood, a community just across the water from Kineo, about halfway up the lake.

The northern portion of the lake is called North Bay. When we were there, we did not see many boats. Sailing in the middle of the lake we could see no clues to what century we were in: no power lines, no houses, no other boats. This is my kind of vacation. 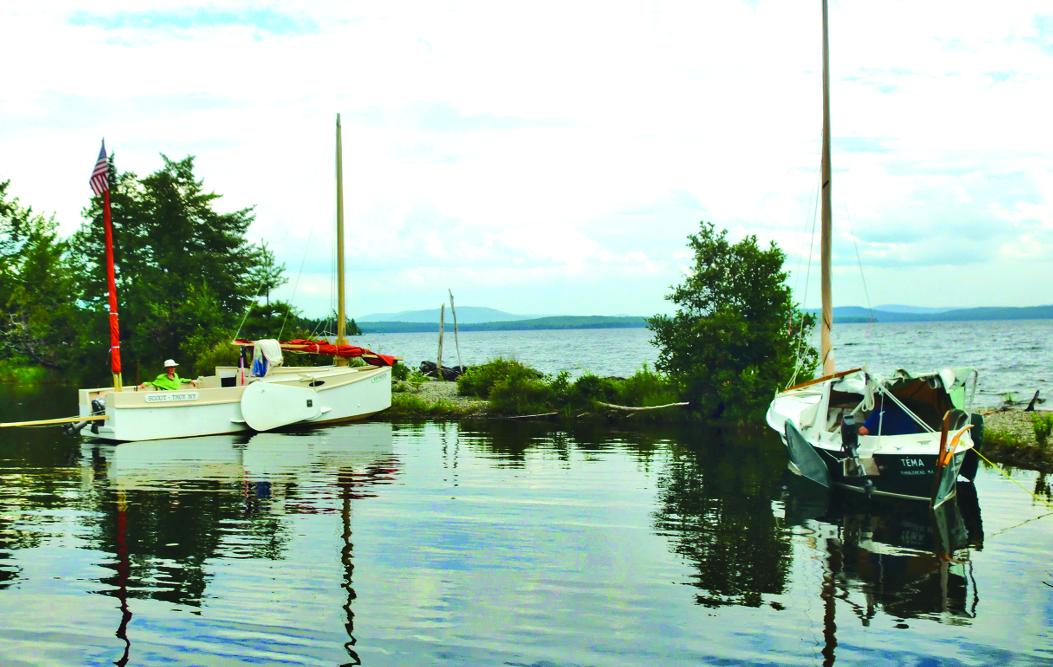 The anchorage at Ronco Creek is a well-protected pond separated from the windy lake by a narrow bush-covered bar. There are no nautical charts of Moosehead. Apparently ice in the winter changes the location of the bottom’s rocks too often to make it reasonable to locate them every year. Like many other lakes, there are fishing maps of Moosehead, but they are not too detailed.

The most logical place to start a cruise on Moosehead is from the south, where Greenville is the largest town. It is a pretty community with all the services you’d expect, along with two floatplane businesses that would love to take you up and show you the lake from the air. (Moosehead Lake is the site of an annual international seaplane fly-in. This year’s fly-in will take place September 10-13, 2015.)

The town dock just northwest of Greenville is where we launched on our first visit. Since we like sailing in the middle and north sections of the lake better than the lower third, the next four times we launched, we chose the public ramp at Rockwood, halfway up the lake on the west side, right across from Mt. Kineo. The parking there is generous. There are two outhouses, and the two ramps are well maintained. There is even a bit of protection if the wind direction is unfavorable.

One rewarding day we investigated a promising creek coming into the lake in Tomhegan Bay in the northern half of the lake. There were a few houses on the bay and someone had thoughtfully placed buoys marking the deepest sections. After winding around two bends, the creek opened up to a half-acre pond, totally protected from the wind and promising moose sightings and other critters. Alas, we saw lots of birds, but no moose that time.

We have sailed to the top of North Bay twice. The first time we stopped at a charming general store with a three-person lunch counter where the owner served plate-sized blueberry pancakes. When we returned seven years later all we found was a small camping ground with a beach. The shallow anchorage around a point from the campground held us well and safely.

Several times while cruising on Moosehead, the Lommens have been visited by moose. This one came right up to their boat. Our favorite spot on the lake is in Ronco Bay, SSE of Mount Kineo. On the map it appears to be wide open and unprotected from the wind. But with a bit of reconnoitering, you will find a channel into Ronco Creek. Once you make it past the just-barely submerged rocks you will enter a string of small ponds separated from the lake by a sandbar with low brush, fragrant penny-royal, milkweed, and a few hardy trees. The ponds are as smooth as can be, even when the lake is full of whitecaps.

When we are there, we pull the bow of our boat up to the pond side of the sandbar, pointed out to the gorgeous view of the lake. We embed our anchor into the pebbles on the beach, maybe wrapping the line around a big rock, too. We have seen bald eagles and loons galore, and white-tailed deer, and on three of our five cruises on the lake, we have seen a moose. On our last visit, we were awoken in the morning by a moose grazing just outside our boat’s thin walls.

The loons are still calling us. Maybe the moose are watching for us, too.

Sandy Lommen and her husband Leo Smith have been sailing together for 45 years. They live on a small farm in Upstate New York with chickens and sheep, where Sandy is a full-time weaver of one-of-a-kind clothing. Their boat is at the ready, on its trailer.

For more information about the Shallow Water Sailors: www.shallowwatersailor.us