Ecologically minded Mainers who live in the city have plenty of options for buying local produce but not necessarily for getting rid of it in a sustainable way. This was the dilemma faced by then 27-year old Tyler Frank in 2012 when he moved into a second-floor unit in Portland, Maine. “We had a tiny shared yard with no room for a compost bin,” he said. “My roommate said that if we could just put our compost on the curb with our recycling it would be so easy.”

Frank agreed and started a business to do just that: curbside composting. Since then his company Garbage to Garden has grown in leaps and bounds. By the fall of 2015, the company was collecting in excess of 50 tons of waste a week from more than 5,000 residential and 100 commercial accounts in Portland and seven surrounding communities—close to one in six Portland households participates. Frank said his company is the largest of its kind in the northeast. In Southern Maine, another company, We Compost It!, also offers curbside compost pickup.

Customers put out their buckets of kitchen scraps once a week. One of Garbage to Garden’s 12 employees picks up the buckets, empties the waste into a big bin, and leaves behind a clean bucket. Garbage to Garden diverts more than eight tons of waste a year from landfills. Photo by Emily Qualey

Both companies are at the forefront of a national movement.

Frank said he has been fielding calls from municipalities across the region asking for advice on how to replicate his program. “People all over the country are really concerned about this now. They want curbside composting in their towns,” he said.

In Maine, the average household produces over half a ton of waste annually, much of which could be recycled or composted, according to a 2014 report by Colby College, which recommended that the state adopt an “integrated composting framework.” 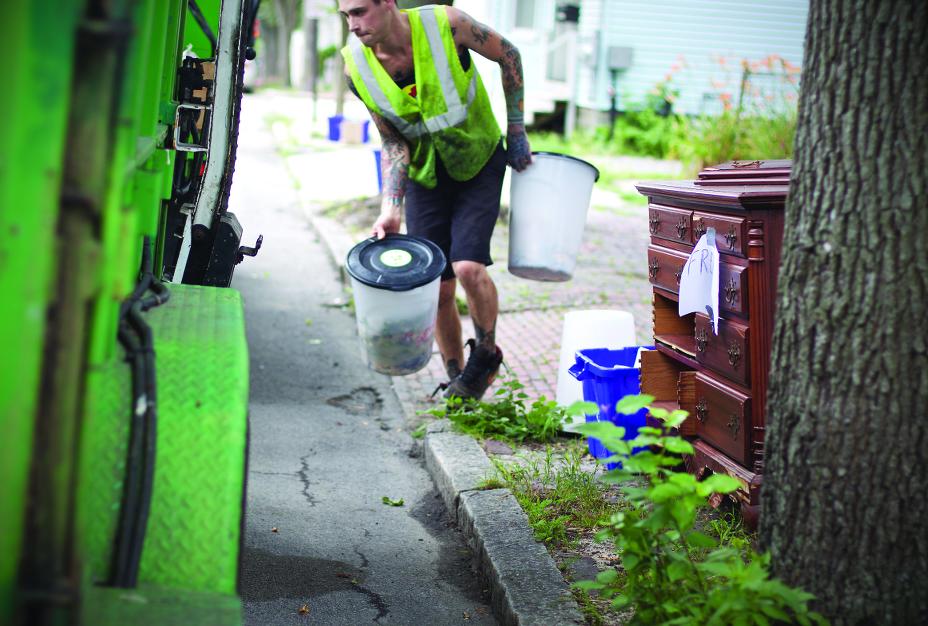 Photo by Emily Qualey For a fee of $14 a month Garbage to Garden customers get a sturdy six-gallon plastic bucket with a top—secure enough to sit in their kitchen for a week and not smell. Each week when they put out their recycling, customers also set out their buckets of food scraps. Garbage to Garden picks up the full buckets and leaves behind clean ones. The waste is taken to the Benson Dairy Farm in Gorham, Maine, where it is added to piles of decomposing cow manure and turned into usable compost. Those curbside customers who wish can get three-pound bags of this compost delivered along with their clean buckets. The benefit of composting on such a large scale is that the temperature of the pile gets as high as 160 degrees which allows Garbage to Garden to accept material home composters usually avoid, such as meat, bones, citrus, and dairy products.

The key to his success, though, according to Frank, is providing customers with clean buckets and taking the “ick factor” out of the equation. “Composting can be gross,” he said. “There’s nothing better than having a fresh bucket dropped off right at your house.”

For More Information
Garbage to Garden
Portland, ME
207-332-0277
www.garbagetogarden.org