Messing with a classic design, such as the venerable Wilbur 34, is not for the faint of heart. But when a long-time customer acquired a 1985 Wilbur Flybridge Cruiser and delivered it to Kittery Point Yacht Yard’s docks with a vision for combining the boat’s classic downeast lines with the yard’s modern restoration techniques, and a subtle redesign of the house, Tom Allen and his crew were up for the challenge. 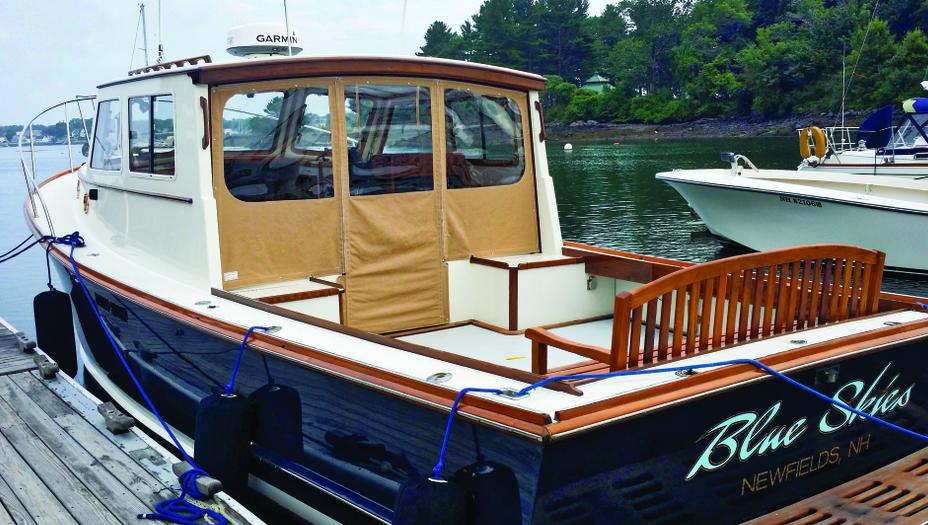 Thirty years of service had not been kind to the Wilbur. She suffered from substantial core delamination throughout the house and decks, and the systems and wiring all begged for updating. When Phase 1 of the ambitious project came to a close, the Kittery Point crew had invested some 1,600 hours in the makeover.

“The owner wanted to eliminate the hard angles and box-style house design that were typical of the 80s,” Allen explained. “Our orders were to create an inviting and open transition into the wheelhouse with a built-in settee that doubles as a pull-out sleeping berth, and to add cockpit seating and storage.”

The heavy lifting began with removal of the old flybridge and steering station, the aft-cabin bulkhead, and all of the windows. Delamination damage was repaired. The window openings were reconfigured to the new window designs, the cabintop visor was modified, the aft ends of the house sides were extended, the aft-cabin rake was modified, and the cockpit sole was cut out to facilitate the replacement of rotted deck beams.

The vessel’s fuel and shore-power systems were upgraded to meet ABYC standards. Also on the upgrade list: a complete navigation package, new hot-water system and toilet, installation of LED navigation lights, and a new wiper/washer system. New interior window trim and a hidden wire chase were fabricated and a new headliner and battens were installed in the cabin and wheelhouse. New teak coamings, eyebrow moldings, handrails, storage seats with fiddles, and a support arch at the aft end of the new open wheelhouse kept Kittery Point’s wood shop busy.

Rounding out the project, the cabin exterior, top, and foredeck were Awlgripped, while exterior teak was epoxy-coated and varnished. New canvas and cushions completed the rebirth of the boat.

“With Phase 1 of the project completed, it’s exciting to see a well-built and reputable older boat transformed into something truly unique, beautiful, and accommodating. Even more rewarding was experiencing the enthusiasm, collaboration, and relationship that develops between the boat owner and the craftsmen and women doing the work,” Allen said. “She’s the best of both worlds. She’s a Wilbur, but there’s not another one like her anywhere!”

Phase 2, contemplated for winter 2015/2016, calls for Awlgripping the hull and deck ring, new non-skid, updating the galley, and a redesign and fabrication of the head and shower compartments.