I thought of it then, and think of it still, as the Great Revelation of the Night Lights. With my one crew member, Charles “May I Cast Off Now?” Lassen, I was two days out of Portland aboard my Tanton 39 cutter Lunacy and for much of that time we had been buried in dense fog. We were off Cape Sable—an uncomfortable place to be in the best of circumstances, with fast current, shoal water, and vast fleets of fishing boats milling about—when finally it started to dissipate. 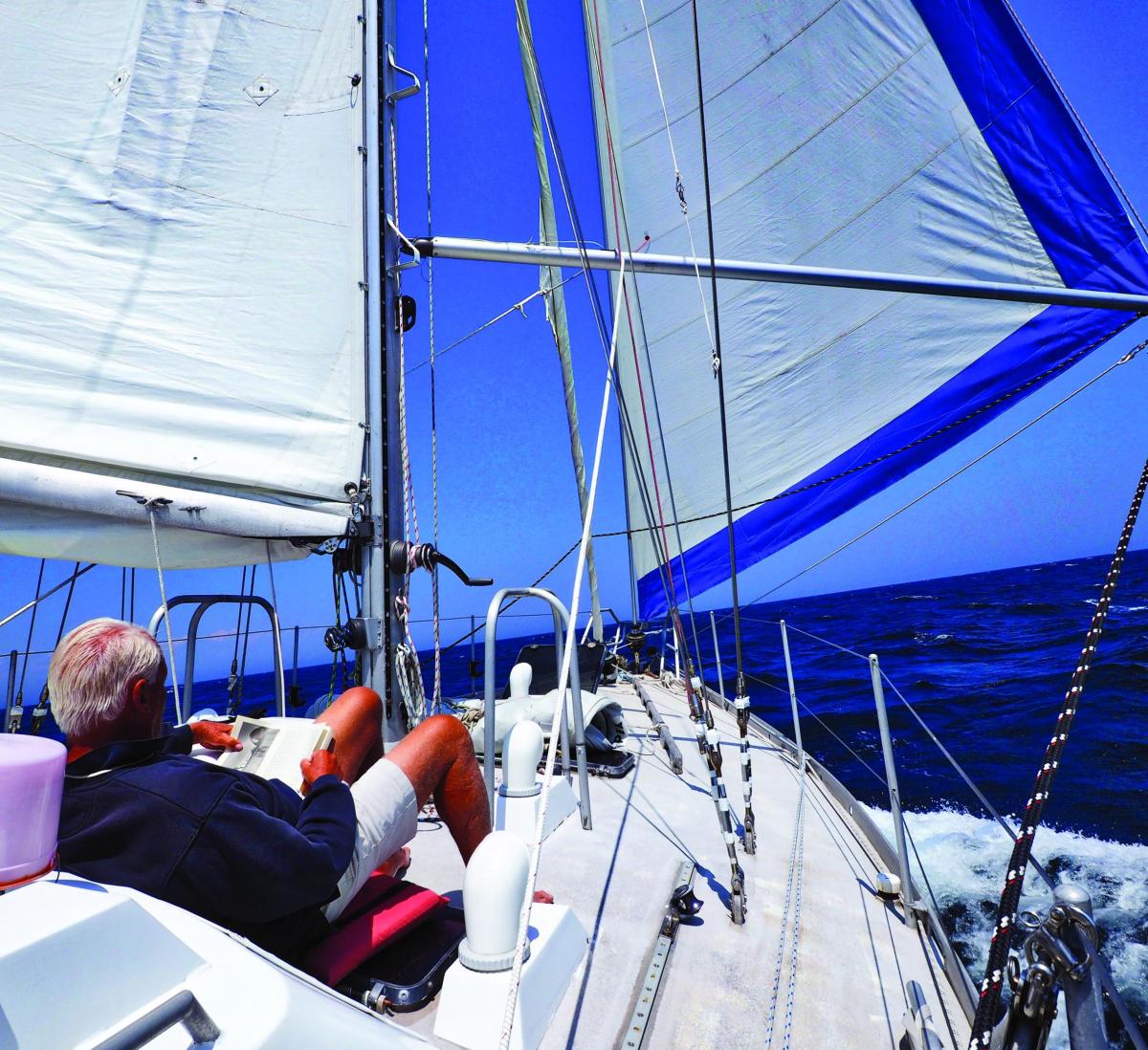 After the transit across the Gulf of Maine from Portland in heavy fog, mate Charles Lassen was happy to catch some rays on deck as he and Charles Doane romped wing-and-wing up the east coast of Nova Scotia in front of a strong southwesterly.

I was on watch alone late that night, and my initial reaction, of course, was one of relief. At last, just we when we most needed it, visibility was improving! As it continued to improve, my relief was transmuted to outright joy. The newly revealed night sky was studded with brilliant stars. In the distance lights on shore had become visible, evidence of our eventual arrival somewhere. But they paled next to the lights in the water—sparkling everywhere—bioluminescence so intensely vivid that the boat carved out a valley of bright light behind it. Every wave and wavelet for as far as I could see was capped with a brilliant light of its own. So many twinkling lights, above and below, it was impossible for me to say where the sea stopped and the sky began.

It was a moment I will remember until the very end of my days.

Our ultimate goal in crossing the Gulf of Maine had been to visit Lunenburg and Mahone Bay in Nova Scotia. Lunenburg, of course, has a vast reputation among the Nautical Illuminati, and Mahone Bay, just to the north, has the highest concentration of islands and islets per square mile of anywhere in Nova Scotia, and so seemed attractive by default.

Lunenburg, which is a United Nations World Heritage site (the whole town!), was much what I expected: a fabulous place to visit by boat. After a boisterous downwind romp up the coast from Cape Sable, we were greeted by attractive young women sailing classic daysailers, all finished bright, who waved enticingly and bid us welcome as we entered the harbor. Inside we found all manner of traditional craft, perfectly primped and maintained, with of course a high preponderance of schooners. 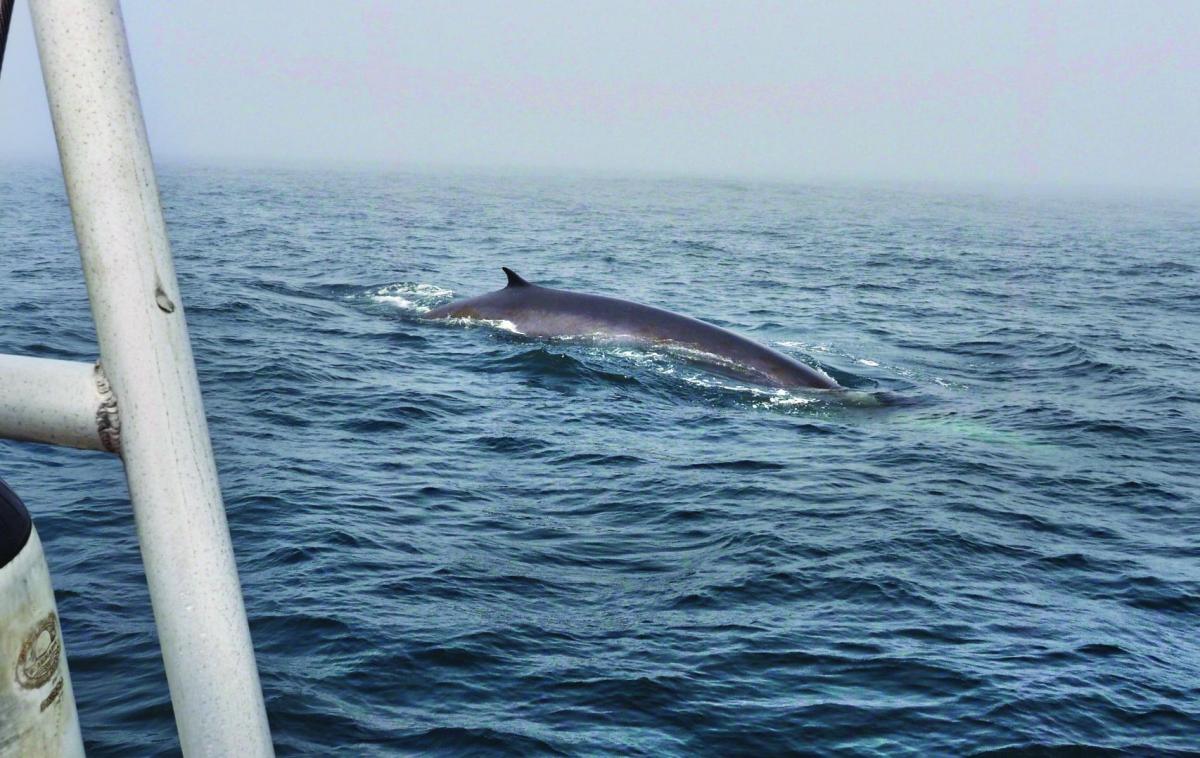 While crossing to Nova Scotia, Doane spotted three whales close by, one of which went flukes up, and he saw two spouts at a distance. This whale was sighted close aboard off the port quarter. Mahone Bay was something else entirely. Studying charts at home, I had marveled at its vast archipelago of islands and imagined they were uninhabited. I pictured us gunkholing among them, stopping often to go ashore and explore their virgin interiors.

During our first day on the bay, thanks to the fog, which continued to roll up and down like a tease after we left Lunenburg, I was able to maintain this fantasy, as we couldn’t really see the islands. On the second day, bright and clear with a light northwesterly, we found in fact they are all covered with summer homes. Some of them are quite fancy, on a par with anything you’d find on the Gold Coasts of New England.

The Big Experiment during our cruise concerned the Importation of the Ferry People. My wife Clare, daughter Lucy, and Charles’s bride Sookie all came via the Nova Star ferry from Portland with a car and joined us for a weekend in Lunenburg. I had some anxiety about this, that the ferry ride would prove uncomfortable, the drive from Yarmouth to Lunenburg would be too long, etc. In fact it all went perfectly. The Ferry People had a fabulous time, both on the ferry and with us, and the experiment proved a grand success. It is a shame that the recent demise of the Nova Star will prevent us from doing something similar in the future. 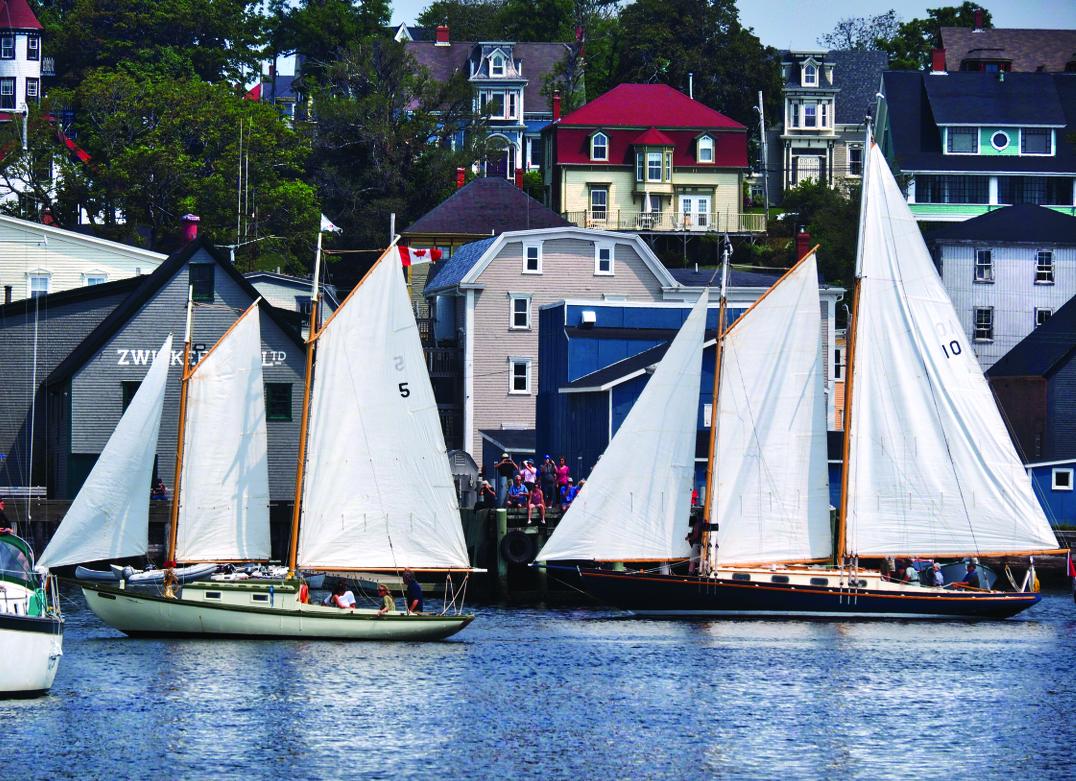 The author and his mate arrived in Lunenburg in time to witness the annual Wooden Boat Reunion, which was dominated by schooners of all sizes and types. Bluenose II, a faithful reproduction of the original Bluenose which was undefeated in 17 years of schooner racing, is also based in Lunenburg. Charles and I sailed out of Lunenburg bound south down the coast not long after the Ferry People departed. We had a fantastic piece of luck and covered more than 60 miles close-hauled, all on one tack (again in dense fog), before we arrived at Lockeport, a once-prosperous fishing port, our last stop before we headed back to my home mooring in Portland.

Lockeport is nothing like Lunenburg or Mahone Bay. They’ve lost their fishery, but haven’t managed to remake themselves as a successful touristy summer-people sort of destination. The Lockeport economy is profoundly depressed, though they are trying their best. What the residents do have in common with everyone else we met in Nova Scotia is that they are extremely friendly, polite, and considerate. Canadians truly are NPOE (Nicest People On Earth), which is always reason enough,
I reckon, to sail over for a visit.

Nova Scotia: IF YOU GO

Sailing over to Mahone Bay is well worth the trouble, as it truly is a great cruising ground. Coming from Maine you’ll need to check in with Canadian Customs and Immigration, which is best done in Lunenburg at the Fisheries Museum of the Atlantic right on the waterfront. They will help you place a phone call to the authorities and that, thankfully, is the extent of the formalities.

During my visit I found no shortage of vacant moorings to pick up, plus anchoring is always an option, as in most places there is plenty of room to swing to a rode. In Lunenburg you should also be able to come to a dock if necessary, and this is the best place to get any technical assistance you may need.

The one thing you do have to be careful about is fuel. I found no fuel docks anywhere during my visit and to get a fuel truck to come to a wharf in Lunenburg you have to buy at least 100 gallons. I ended up buying an extra jerry jug and hand-carried all my fuel from the nearest gas station on shore.

Charles J. Doane learned to sail on the Maine coast as a boy and since then has roamed the North Atlantic on numerous boats. He has written for various sailing magazines.

From Farmhouse to Summer Retreat