A connection to the Wabanaki and their land

As a child in West Virginia, Steve Cayard loved camping out in the woods. There he discovered what would become a lifelong interest in subsistence living and the skills that make such a life possible. 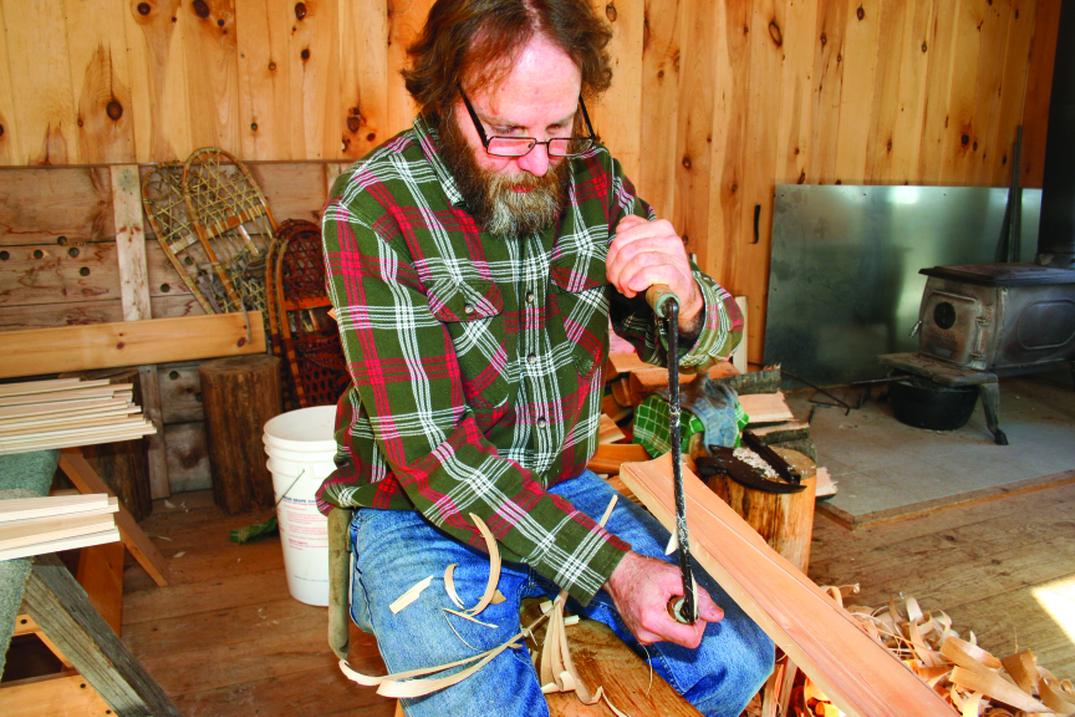 Steve Cayard sits at a traditional shaving horse and uses a drawknife to shave cedar stock to the general dimensions needed for a birchbark canoe rib. Photo by Laurie Schreiber In the 1970s, Cayard—the son of college professors—dropped out of high school and spent the next 13 years hitchhiking across the United States and Canada. He lived in the woods wherever he landed, and visited libraries to continue his research on techniques for living off the land. He read up on indigenous peoples and their skills, such as hunting and gathering techniques, building a fire without matches, tanning hides, making snowshoes, and wigwam and building canoes with birch bark.

“My thinking was that I wasn’t getting the kind of education I wanted in school, so I designed my own education,” he said. “I was looking for the old ways of living in the woods.” 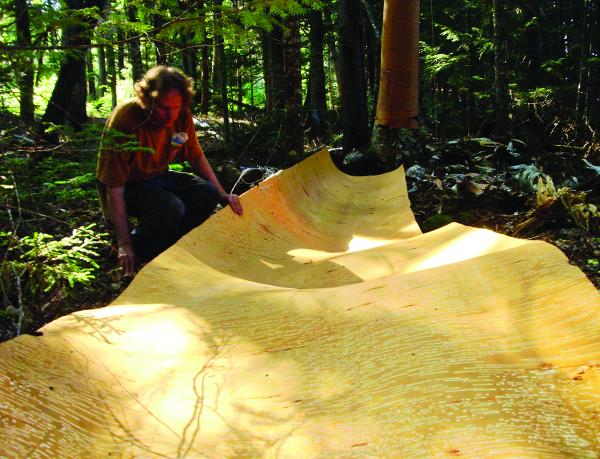 Photo by Steve Cayard By 1987, when Cayard bought a backwoods homestead in Maine with his wife, Angela DeRosa, he was ready to settle down. He hoped to make a living from his talents, with a focus on traditions of the Wabanaki, or “People of the Dawnland”—the collective designation given to the Penobscot, Passamaquoddy, Maliseet (alternately spelled Malecite), Mi’kmaq, and Abenaki tribes.

He began by building and selling birchbark baskets. Then in 1995, he turned to birchbark canoes, and never looked back. Over the years, he’s become known for his gorgeous work as well as for his rigorous research into traditional Wabanaki designs and craftsmanship. In the somewhat insular world of birchbark canoe fandom, his canoes are known across the country, and even overseas. He is also a renowned teacher among both native and non-native students who, like Cayard, cherish this craft born from the woods.

Photo by Steve Cayard A recent visit found Cayard in his shop making two sets of ribs for two canoes. Unlike many cluttered workshops, his is tidy and full of natural light, more like an artist’s studio. The aroma of clear white cedar, split into flat planks from the log, filled the air.

“Cedar is perfect for canoes because it’s lightweight and pretty strong for its weight,” said Cayard. Dressed in a well-used plaid shirt and L.L. Bean boots, he sat at a shaving horse—a traditional European woodworker’s vise rigged with a foot-held block to secure a narrow, four-foot length of cedar.

Using a drawknife, he peeled long curlicues from each side of the stock to get the general width needed for a rib. Cedar swirls piled up at his feet. Next, he did some further shaping with a plane, then took up a crooked knife for a finer trim.

“It’s a very accurate carving tool,” he said, using his left hand to pin one end of the cedar against a sawhorse and the other against his knee, while gripping the crooked knife in his right hand. “It’s easy to control. You’re pulling, rather than pushing, so you have more force.”

Although he spoke tentatively, frequently pausing to get his thoughts in order, Cayard’s enthusiasm for his craft was obvious. 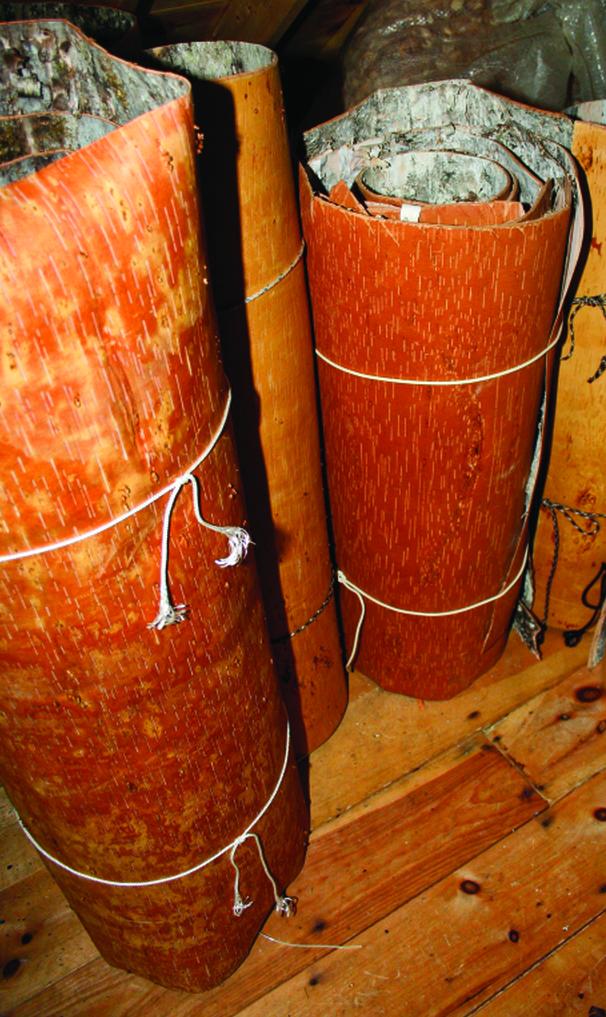 When sliced vertically to at least an eighth of an inch, birchbark peels off easily in large, rectangular sheets, which Cayard lays out, then rolls up, inside out, and stores until ready to use. Photo by Laurie Schreiber Delicate shavings falling on the floor looked like ribbon candy. He turned over the rib to hollow its bottom ever so minutely—just a stroke of the plane. The face of the rib is rounded. Using a modified cornering tool, he softened the top edges. Other parts awaited attention, including long split gunwale stock stacked in back.

“That’s quite a trick, splitting a 20-foot length of cedar, keeping an even thickness,”
he said.

Elsewhere were stashes of rolled-up birchbark, which is peeled off trees in large, rectangular sheets.

“In the summer it peels pretty easily,” he said. “Just climb a tree and peel it and lower it down.” The entire outer bark, which must be at least 1/8 inch thick, is cut through vertically.

Cayard learned a lot about the craft from The Bark Canoes and Skin Boats of North America, by Edwin Tappan Adney. He also has done his own research—in museums, old photos, and written accounts—on Penobscot, Passamaquoddy, and Maliseet builders of Maine and New Brunswick from the early- to mid-1800s.

Cayard’s connection to his work is informed by a deeply held feeling that culture is as much a reflection of the land as it is of the people. His exploration of traditional Wabanaki culture has given him to better understanding of Maine’s native forest. The birchbark canoe is an outgrowth of that forest—its birches, whose bark is both thick and pliant; its cedar trees, whose wood is springy, light, and easy to split precisely; and its spruce trees, whose roots—the sinews of the forest—become the sinews of the canoe.

It hardly seems possible that these solid elements—bark, trunk, and roots—can be transformed into materials pliable enough to be used, essentially, as fabric, thread, and stays. But that’s what happens during the composition of this low, lean craft, which is characterized by a raking stem that swells to a rounded middle, then yields to a high tumblehome. Construction can take place in a couple of weeks, and involves an inside-out sequence of steps that starts with making and shaping the skin, then adding ribs and planking. (This contrasts with conventional boatbuilding—assembling a framework, then skinning it.) Essentially, the bark skin is laid out and sewn with spruce roots, and the gunwales attached, thus forming an empty envelope of bark. The envelope is then shaped and stretched by tucking the ribs under the gunwales and driving them tight against the bark, with the planking sandwiched in between. Copious amounts of hot water poured onto the bark keep it pliable during the process. When the ribbing is complete, gunwale caps are pegged and lashed to the top of the gunwales, and two headboards are installed in each end of the canoe. The seams are gummed with a mixture of pine rosin and lard, and the canoe is oiled inside and out with tung oil. On the outside, Cayard’s canoes also feature panels of decorative etchings. 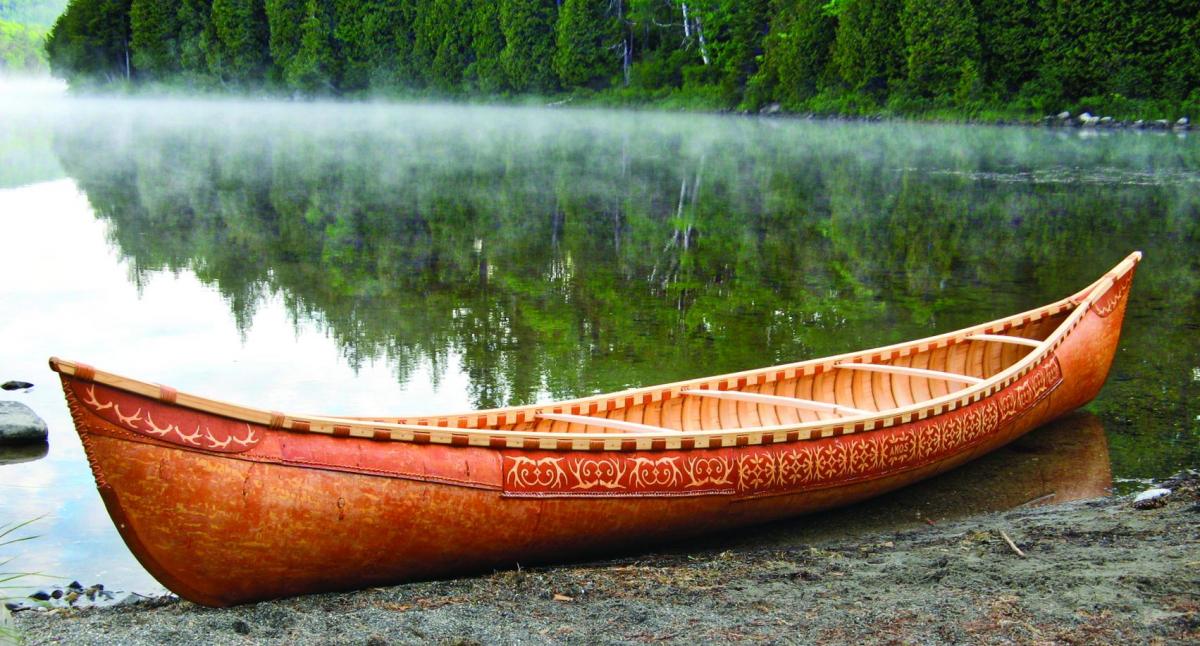 A 16-foot canoe, built in 2010, features decorative designs etched into winter bark. Peeled off when the tree is dormant, winter bark has a lovely reddish-brown color on the inside. Photo by Steve Cayard

Over the years, he has made more than 50 canoes, 30 on his own, and the rest as part of his workshops. Even after three decades, he’s still fascinated by the craft.

“I’m always learning, every time I build one,” he said. “It never gets boring: It’s such an aesthetically pleasing process. At the same time, it’s been a real treat to hang out with people whose traditions I’ve studied all these years. I feel like the culture belongs to the land. So this is something that makes me feel a connection with the land and the people here.” 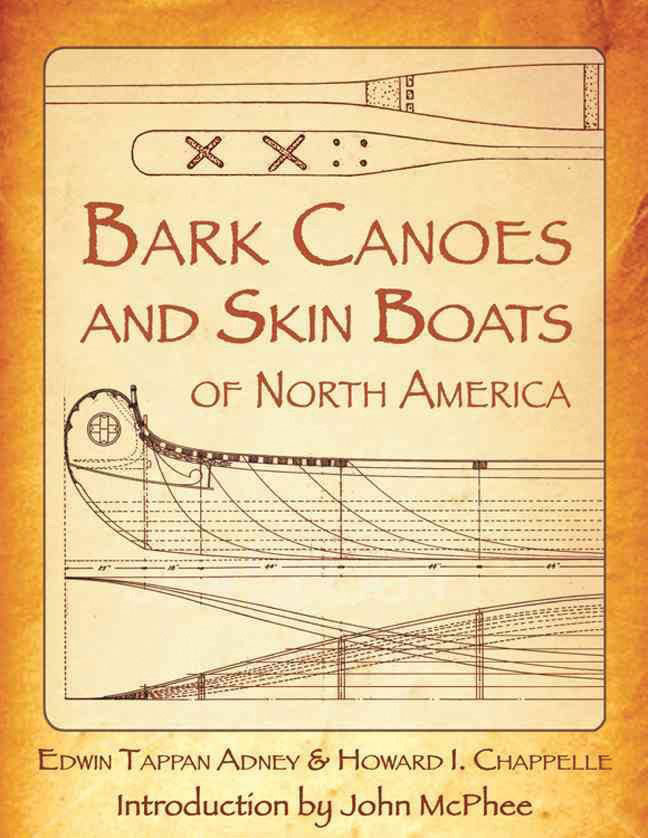 One of the greatest references for all birchbark canoe builders and fans is the epic tome, The Bark Canoes and Skin Boats of North America. Born in 1868, artist, writer, and photographer Edwin Tappan Adney first became interested in birchbark canoes when he spent 20 months with the Malecite tribe in Woodstock, New Brunswick in Canada. Researching native canoes and culture became a lifelong obsession. After his death, Smithsonian Institute curator Howard Chappelle compiled Adney’s papers into this book. First published in 1964, it includes black-and-white line drawings, photos and diagrams.

Meet Steve Cayard and learn more about his craft at the Maine Boats, Homes & Harbors Show where he will be exhibiting some of his birchbark canoes, August 12-14, 2016 in Rockland, Maine. 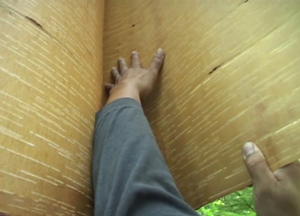 Watch a series of documentary videos produced by the Penobscot Nation and filmmaker D’Arcy Marsh that includes footage of the birch bark harvest, as well as the rest of the process of building a canoe:  ​CLICK HERE