There’s a scientific term for that: stratification 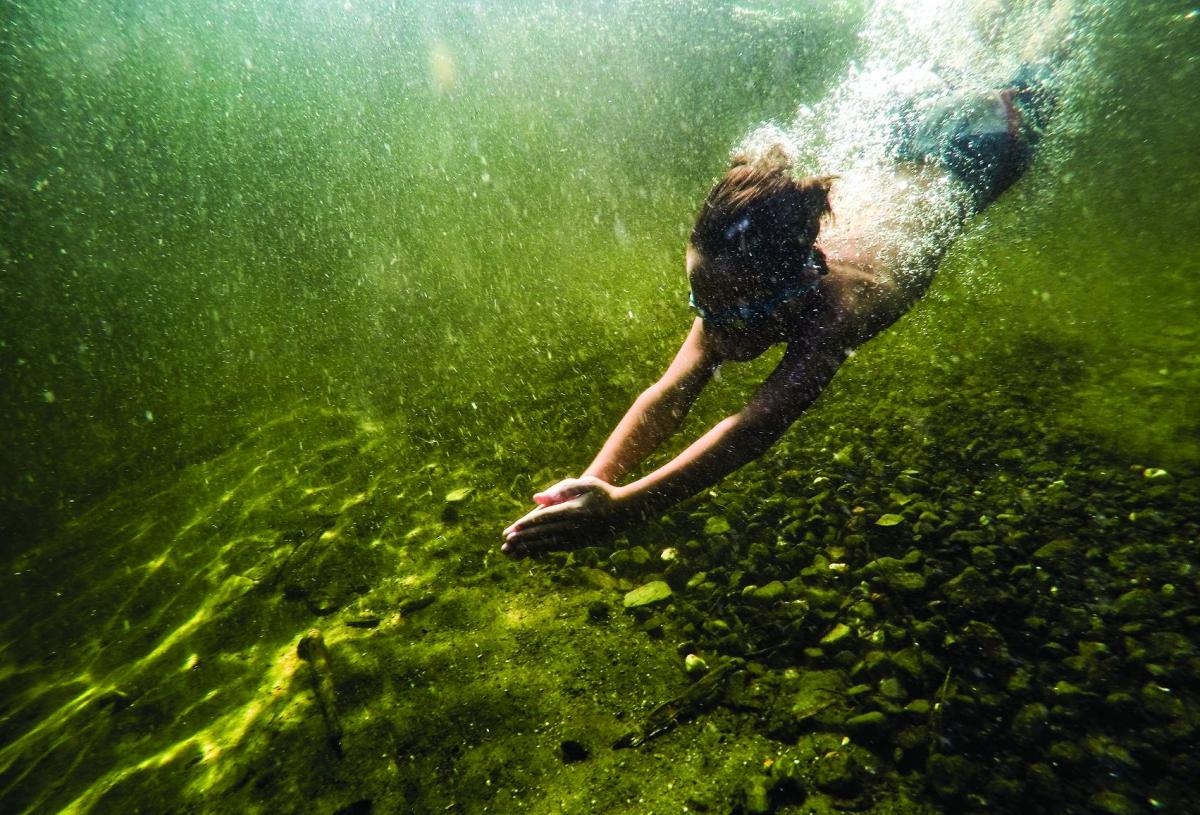 A young boy dives into the clear waters of Moosehead Lake. Photo by Heather Perry

It wouldn’t be summer in Maine without swimming in your favorite lake. You wade out through the warm, shallow water at the edge, and think to yourself, “This water isn’t so bad.” Then as you swim farther out, your dangling toes dip into pockets of icy water. You dive down to the bottom, and come up breathless from the cold.

It never fails—no matter how warm the water feels at the surface, cold water lurks below. The reason behind this is a physical phenomenon known as stratification: when water forms layers due to changes in temperature that affect density.

Cold water is denser than warm water, so it sinks. The hotter the surface water gets, the more likely it is to “float” on top of denser, heavier colder water below, restricting the amount of mixing that can take place. A difference of only a few degrees can create a boundary between the surface and deeper waters. In many Maine lakes, stratification is a seasonal phenomenon.

Ice cover that has formed over the course of the winter slowly deteriorates until it is riddled with air pockets. Warm spring rains fill the pockets and cracks with water, accelerating the melting process. At this point, all the different lake layers are about the same temperature: 39 degrees Fahrenheit—the point at which water is the heaviest. With all layers essentially at the same density, they are easily mixed by wind and current, which allows surface water to be pushed to the bottom and bottom water to rise.

The complete mixing, which helps distribute oxygen throughout the lake, may take anywhere from weeks for large lakes to days for small, protected lakes, depending on the weather.

The layers actually have names: the epilimnion, warm surface water that is mixed by wind and air currents; the metalimnion, middle layer where temperature tends to change more rapidly; and the hypolimnion, which is the bottom layer of colder, undisturbed water. The thermocline is the horizontal plane in the middle layer where the rate of temperature drop is greatest.

Wind circulates the surface water, but the warm water of the epilimnion is unable to drive down through the cold, dense water of the hypolimnion. The temperature of the hypolimnion changes little between spring turnover and summer, which is why it’s always so cold down at the bottom. The depth of the top warm layer continues to increase over the summer.

As temperatures cool in late summer and fall, the lake begins to lose heat. Eventually when water surface temperature comes closer to matching the temperature of the bottom water, the layers collapse. Mixing goes deeper and deeper until the entire volume of lake water is circulated, and fall turnover occurs. Eventually as the water cools, ice forms on the surface. Since ice is less dense than water, it floats. Once the surface has frozen it effectively seals off the water below from wind and mixing.

Not all lakes experience the seasonal stratification cycle the same way. Climate, elevation, surface area, and depth all influence the process. Lakes in warmer regions that do not freeze experience a single, longer stratification period during the warmest part of the year. Lakes in colder regions experience later, shorter periods of stratification. Shallow lakes are continually mixed by the wind and may not stratify at all. Another factor is how clear the lake is, which affects how far down solar radiation penetrates.

Megunticook Lake in Camden, Maine, in the fall when cold air cools the surface enough to make it sink down and mix with the bottom layers. Photo by Polly Saltonstall

Lakes so clean you can drink them

Lakes and ponds provide drinking water to more than 30 Maine cities and towns. These water sources are strictly protected by public water utilities, the Maine Department of Health and Human Services, and the U.S. Environmental Protection Agency.

Eight of the lakes are of such high quality that they qualify for a waiver from the EPA’s filtration requirement. Included among these are Sebago Lake, which provides drinking water to the greater Portland area, and Floods Pond, which serves the City of Bangor. The others are Lake Auburn (Lewiston and Auburn), Eagle Lake (Bar Harbor), Hatcase Pond (Brewer), Little Pond (Great Salt Bay), Lower Hadlock (Mt. Desert), and Jordan Pond (Mt. Desert and Seal Harbor).

After Bangor officials finally recognized that the Penobscot River had become too polluted to drink in the 1950s, the city searched for and found Floods Pond, located in a relatively undeveloped forested area just 15 miles away. The Bangor Water District owns nearly 99 percent of the land in the watershed, giving them control over what happens—and doesn’t happen—in the sensitive areas that surround the pond. Anything that happens in the air and on the land ultimately affects surface waters. In the case of the land around Floods Pond, there are only trees—no excess nutrients, fertilizers, pesticides, toxic chemicals, petroleum, livestock waste, septic systems, or invasive species carried in boats. The pond hosts a native population of wild Arctic char (blueback trout)—a fish that lives in only the purest of waters.

The quality is reflected in the taste. In 2014, Bangor won the award for “best tasting” water in Maine. We are lucky in Maine to have access to such clean, healthy, well-managed drinking water.

CLICK HERE to read about a new smartphone app from the Maine Volunteer Lake Monitoring Program that helps explain the weird and wonderful sights to be seen in lakes, ponds, rivers, and streams.

Catherine Schmitt is Communications Director for the Maine Sea Grant College Program at the University of Maine. She is the author of  Historic Acadia National Park, published spring of 2016 by Lyons Press.