“There is a way that nature speaks, that land speaks.

Most of the time

we are simply not patient enough,

not quiet enough to pay attention

to the story.” —Linda Hogan

Geysers of sweet sap surging up from the roots of the red maples and American elms have fed and unfurled their tiny blossoms which are now being pushed off by emerging seeds and leaves. You may find the carmine red flowers of the maples and the soft, mustard-colored elm catkins on the ground underfoot or all over your car these days. The Norway maples and the lilacs are showing their green blossom clusters.

The iconic lupine (lupinus Fabaceae), with its deep purple to lavender to blue to pink to ivory flowers, is now coming into bloom along roadsides as it does each year from Asia to the Americas. The trademark Texas Bluebonnet is a kind of lupine and other kinds are enjoyed as a vegetable in Egypt and Lebanon. In Maine, the lupine generates distinctly mixed opinions. For some it is the quintessential symbol of spring. For others it is a noxious invasive, non-indigenous weed threatening native plants and spurring eradication campaigns in Acadia National Park and other public lands. One man’s weed is another’s wildflower.

On the up side, the lupine shows strikingly elegant displays on its long flower stalks, spicing the air with its peppery aroma, feeding the bees with pollen and delighting children of all ages with memories of Miss Rumphius, Barbara Cooney’s book that features a lupine seed-sowing protagonist. Being a legume, lupine improves the poor soils it prefers by fixing nitrogen in its deep roots. This tends to put the lupine out of business over time as other plants move in to take advantage of the improved fertility. Over the past 25 years I have watched abandoned blueberry fields go to lupine and then to grasses and other wildflowers in a natural progression. Many gardeners can testify to the difficulty of getting lupine started in an already healthy ecosystem. It prefers soil disturbed by human activities like clearing, erosion, and construction.

The term “invasive species” ignores the fact that nearly all species now in Maine are non-indigenous, since the glaciers receded 10,000 years ago leaving only bare rock and till behind. Any list of so-called non-indigenous species in Maine must include not just milfoil, Russian olive, purple loosestrife, and lupine, but also apples, lilacs, forsythia, dandelions, daisies, hawkweed or “Indian paintbrush”, corn, wheat, potatoes, tomatoes, broccoli, and just about everything in our gardens.

Now, to the down side of lupine: Come to think of it, try as I may, I can find nothing about the lupine that justifies its destruction.

Tiny bluets, known as Quaker Ladies, and purple and white violets are in bloom. On higher, rockier slopes, the curled spears of Canada Mayflower leaves are pointing up and unrolling to reveal their tiny green clusters of buds. Overhead, turkey vultures float silently on the warm updrafts over the South slope like the disembodied spirits of peaceful meditators at the Zendo. 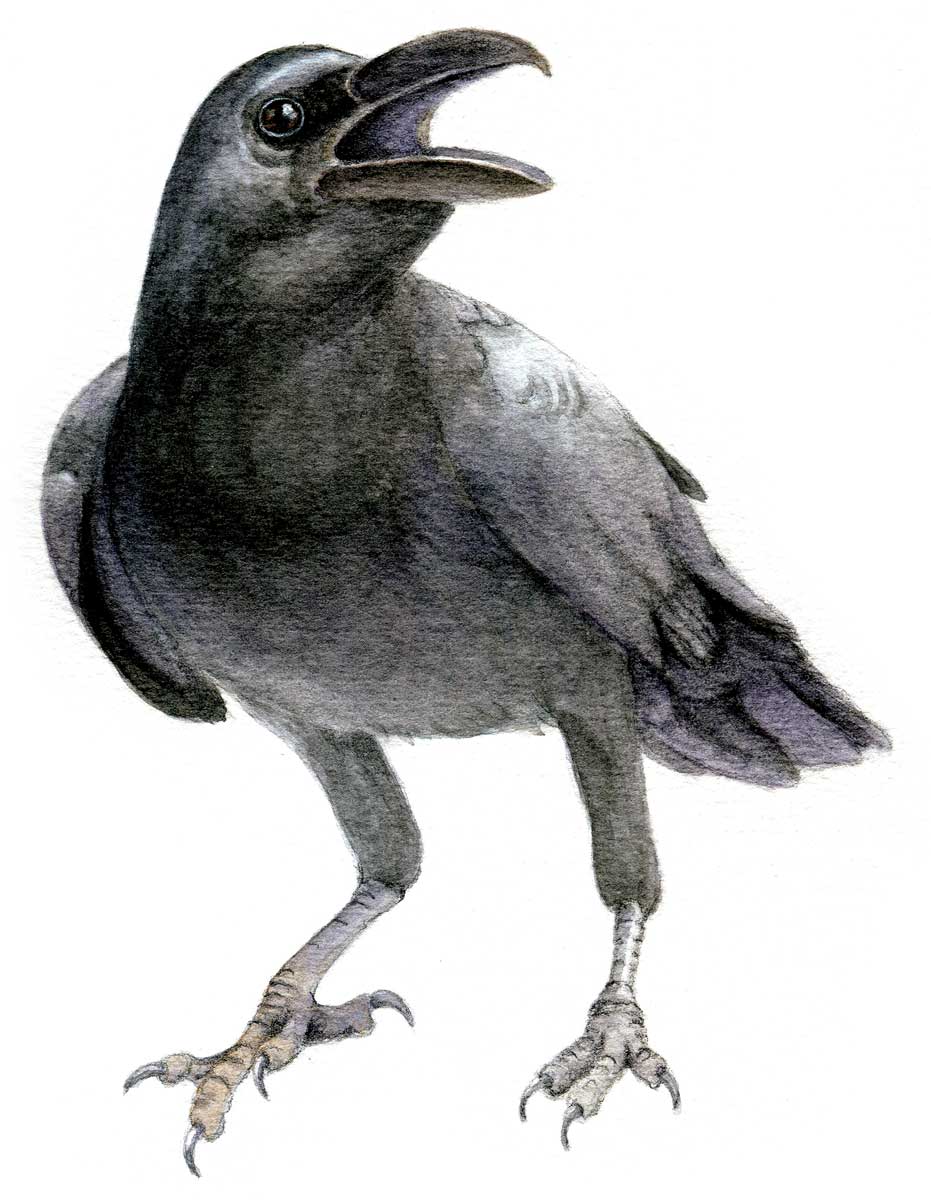 Illustration by Candice Hutchison As soon as possible after Memorial Day, it’s customary in Maine to open up the camp. “Camp” can refer to anything from a rude handmade cabin with sleeping loft, outhouse, and hauled water to a custom-built, multi-roomed home with full bathrooms, garage, boathouse, sauna, cable and internet, and a lobster pot coffee table for authenticity. Our camp is more like the former. It is off a clamming road off a town road on the shores of Cobscook Bay and looks toward Eastport about six miles across the water. After a winter of neglect the camp sometimes looks a little ramshackled and out of sorts, like a dog that has been left alone for too long. But after a bit of sprucing up the place starts to look good again.

The quiet at Cobscook takes some getting used to: it can make your ears ring for awhile. You can hear a dog barking a mile away and scoters, long-tails, and eiders quacking halfway across the bay.

On the first morning one year, ravens launched loud and sustained campaigns to harass the eagle perched in a big spruce just down the shore. The ravens shouted orders at each other as they dove between the tall spruce and fir and cursed and insulted the eagle at the top of their avian lungs. The great bird of prey twittered his innocence in a ridiculously high voice for a bird of such majestic reputation and finally took flight across the bay. The ravens then settled down to their everyday business of just being the Ancient Trickster and Creator of the World.

Before dawn on the second morning I was awakened by a family of coyotes yipping and howling down the beach the other way. Next, a doe and her yearling with their flags up bounded through the clearing in front of the cabin and away from the coyotes. White throated sparrows sang “Old Sam Peabody” and hermit thrushes played their breathy flutes. It was good to get back to camp.

Going to camp for a few days always makes me feel better about myself and the world. It makes me realize that my people and my problems and my opinions are not the center of the universe. All of this lively action going on around me would still go on if my people and I were to disappear from the face of the earth tomorrow. The ravens got along fine before we came along. So did the ducks and the eagles and the thrushes and the sparrows. And they would get along fine without us. It’s humbling. And it’s healing. 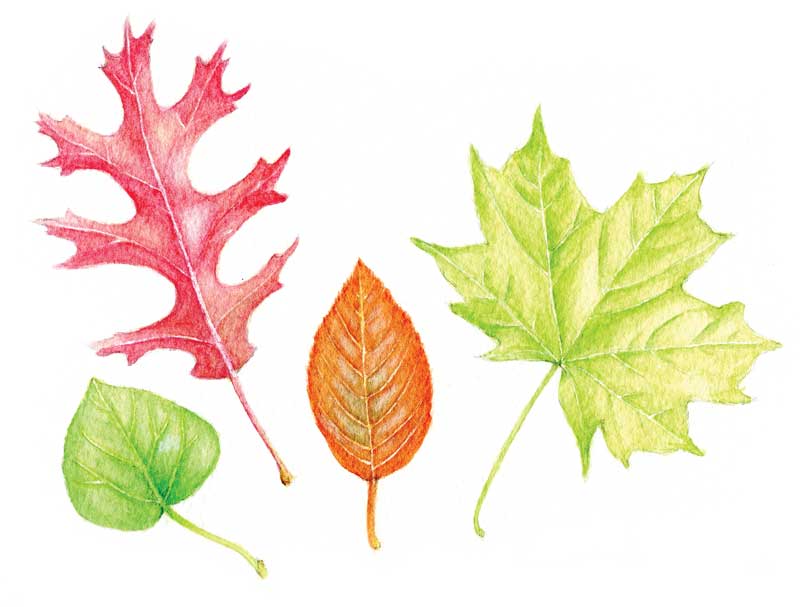 Illustration by Candice Hutchison We have been watching leaves appear on oaks, maples, and birches. When we see the soft textures and pastel colors of new spring leaves, it is hard to imagine that these same leaves will be tough and leathery and splashed with bold colors when they fall half a year hence. Today they are tender and vulnerable and glow like the translucent skin of a newborn babe. New maple leaves are yellow-green. New oak leaves are rose. The leaves of the serviceberry are copper. The leaves of the aspen are lime. And they all shine with light. Millions of acres of natural solar panels have appeared out of nowhere, harnessing the power of the sun to manufacture megatons of carbohydrates and cellulose for all of nature to use for the creation of more life. While this endlessly enthusiastic extravaganza goes on all around us, what do we do? We whine about how we have to start mowing the lawn again.

One recent evening a familiar white-tailed doe was seen walking awkwardly and stretching uncomfortably in the field out back. The next morning at first light she walked out of the woods with a brand-new, wobbly-legged fawn underfoot. She licked the fawn and it nursed eagerly. After a while she left it in the tall grass under some high bush blueberries and took off for the day to graze and browse enough to feed two. All day long the fawn sat motionless and silent in the grass a few feet from our driveway. We came in and out of the house and drove in and out of the driveway, but the fawn remained preternaturally calm.

There was concern that the little spotted one had been abandoned, but come evening, the doe returned and the little one hopped out of the long grass and began to nurse hungrily with its tiny white flag wagging in the near dark. Having never before seen these intimate details of the lives of white-tailed deer, we were delighted and babbled endlessly about it to any who would listen. The lesson here is that a fawn resting quietly in the tall grass is most probably not lost or abandoned, only following its mother’s wishes in the natural order of things.

With summer’s arrival, the early wildflowers go to seed while the later ones come into bloom. Dandelions send out their tiny parachutes and yellow and orange hawkweed takes their place. Lupine blossoms turn to fuzzy gray peapods while ox-eye daisies begin to dominate the fields around them. Hay fields are filled with buttercups. Our summers here are short, and the flowers seem to know it. We can almost sense their haste in moving from bud to flower to seed in the time allotted to them. Our lives are longer, but winter comes for everyone eventually. At least, it has so far.

From Marcus Aurelius: “Observe always that everything is the result of change… there is nothing Nature loves so well as to change existing forms and to make new ones like them.”