Thanks for featuring our Southport 30 in the center of the cover photo of your March/April 2017 issue! If you didn’t know whose boat that is, it’s ours!

The item in the May/June issue on seaweed collection was of interest in that in Florida, the intertidal zone is public land. The up-land owner has rights to the mean high tide line (legal definition interesting). Everything below that line belongs to the public. 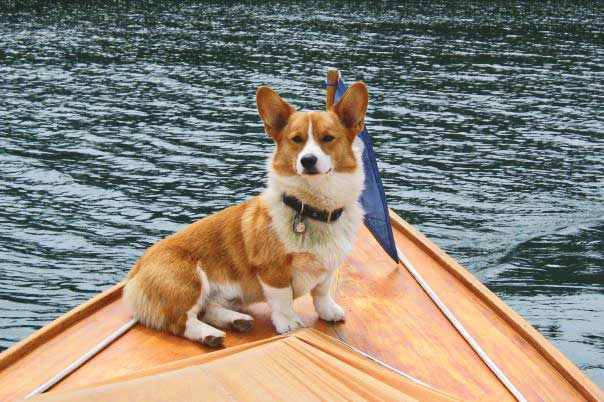 Gibson on deck sans life jacket I recently read your article about dogs on boats with much interest (MBH&H January/February 2017). I grew up on boats and am normally the first one in the dinghy or on the boat. My two-legged pal does make me wear a life jacket, especially on the Laser, but I don’t really mind as I love riding out on the bow and it does make it easier for him to grab me, although I don’t fall off much and know commands like “Ready About.”

In his side column, Dr. Lee (who is a great dogtor, by the way) left out an important consideration for dogs and boats: the older dog. Having been going out to sea every chance I got since I was a tiny pup, I now admit that I am not as young as I once was. Traction on deck is getting tricky, and walking up to the bow makes me nervous, as it never did before. I have tried the rubber socks but they make me clumsier.

As I head into my 14th summer, I am considering telling my two-legged pal that I don’t want to go out on the boat. It’s not true, but I think it might make it easier for him so he’s not worried about me. Unless he’s going sailing in the big boat and then I can just curl up on the cockpit floor at his feet.

Lines of the times

What a delightful, exciting, and somewhat sad read as I absorbed Laurie Schreiber’s short article on the subject of lofting and CAD systems (MBH&H Boats of the Year 2017). I’m an amateur, having designed and lofted just five of the eight boats I have built since I retired in 2000.

Self taught, but for four years of drafting in the 1960s, I used graph paper on each of those five designs until the lines on one draft would strike me as being right for what I was after. I have no explanation for what is a “right” set of lines. They just seem to please the eye, and I have several sets of drawings that were not apparently right.

Once I had my scale drawings, I recorded the preliminary offsets, put on my knee pads, and went to the freshly painted lofting board where I would develop those two-dimensional lines from which I would lift the frames, keelson, stem, knees, and transom to build a three-dimensional skeleton. I love the process from one–inch-equals-one-foot on paper to full scale,  but I have to admit I don’t much like hunkering on my knees these days.

I know if I had been a professional designer/builder that there would not be the time required in a day for that detailed and laborious process of lofting; I’d have to use a CAD system to be able to stay in business. Still, for those who have been in the business of boat design and construction long enough to have experienced the changes from lofting to CAD, there must be an element of sadness and a nostalgic looking back.

I hope the art is not lost. I doubt drafting is even taught these days. Without it, however, I would not have been able to design, loft, and build MY boats.

Save the working boats

First off, let me state I enjoy and look forward to your magazine. That said, the article “The Case for the Basket Case” (MBH&H March/April) troubled me. I was left with the message that old boats are good to save if they are considered the best and they are perceived by the “elite” to be worth talking about. And you need to spend a lot of money to do this therefore you must already be elite, elitist, rich, or all these at once.

It’s not the known master’s works that need our attention, but the works created by people we have not yet come to see as masters.

A lack of interest in the common man’s efforts leads to divisions not only in the representation of historical items, but a division of people in general—this is especially clear in these politically charged times. More boats were made with more sensible and tried-and-true techniques for the everyday person or worker than were built for the upper classes for racing or cruising. It is the common workboat that taught the people that we currently consider masters all they know.

Americans need to stop feeling they need to place what they like on a pedestal to inflate its value, and instead embrace the common since this is what makes America great. For those who truly know boatbuilding, an ex-workboat is a much better built boat, but they often are not saved because those with money are told that a “classic” is somehow more worth the effort.

You have a soapbox in your publication. Help save the real boats used by real people. Just imagine what we would know of the past if we had paid attention to the real masters, those who worked every day for the common person. Just imagine the master works that have been lost because we did not.