Next generation brings a new touch to family-run yards 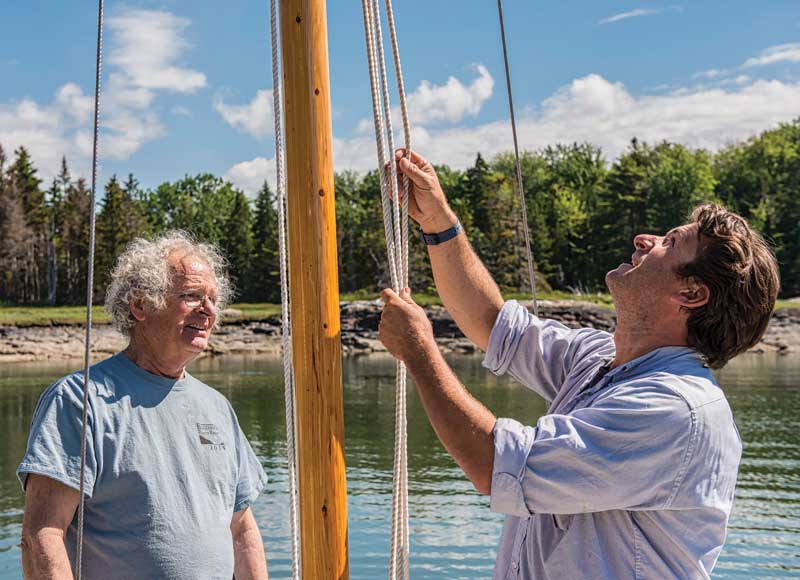 Bob Vaughan’s son Sam (right) left a corporate job in the city to work with his father (left) at Seal Cove Boatyard. He has found new ways of doing things, but also values his father’s 50 years of experience. Photo by Benjamin Mendlowitz

Don runs his boatbuilding, storage, and service yard, the Ellis Boat Company, on the same property in Manset, Maine, where Ralph Ellis and his partner, Raymond Bunker, ran their renowned Bunker and Ellis boatbuilding company.

“They worked with cedar planking on the boats, and that smell was everywhere in the house,” Don recalled. 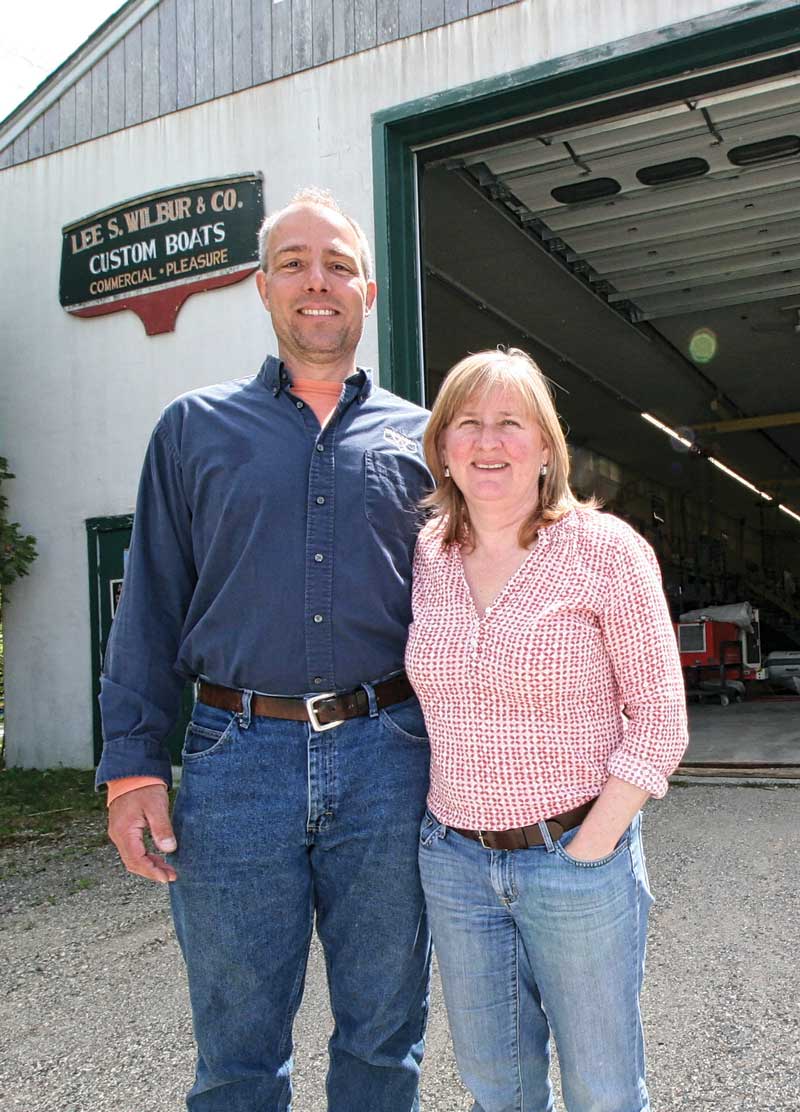 In the 1990s, Don’s son Shane took time off from being a professional musician and music teacher to work on company projects such as web design, database management, and marketing, then came on full-time five years ago. Now Don focuses on major projects.

“Having Shane here takes away jobs I wasn’t fond of doing—getting client proposals out, working with computers,” Don said. “I like the nuts and bolts of building.”

Like Don did in his time, Shane has brought a new outlook and energy that’s advancing the company into the future.

It’s a scene being repeated up and down the Maine coast in recent years as the next generation becomes involved in family-run boatbuilding shops—a sign of the resilience of the industry and the allure of boatbuilding. Some of the younger generation of builders have come back from high-powered city careers, others have simply worked their way up the ladder at home.

The sense of commitment to, and pride in, the family business is a theme. Next gens who have grown up around these yards have an innate understanding of the product and culture. And there’s a give and take: the younger generation explores new ways of doing things, while the older generation offers years of experience.

Susan Swanton, executive director of the Maine Marine Trade Association in Biddeford, has noticed the trend.

“The generation I grew up with, in the industry, is starting to age out, and I think many are blessed to have kids who want to carry on the family business,” she said.

Maine is unusual in having many family-owned boatyards, as opposed to increasingly corporate operations elsewhere in the nation.

“That corporate trend hasn’t caught on in Maine quite as boldly as it has in other places,” Swanton said. “I’d like to think that’s part of what makes Maine a little bit different from the rest of the universe.”

Customers like knowing that when they walk through the door at a family-owned yard people know them and their boats and are happy to see them, she said.

“A lot of our customer base likes to be here because they feel it’s special,” she explained. “It’s not just about volume for the yard. It’s about relationships.” 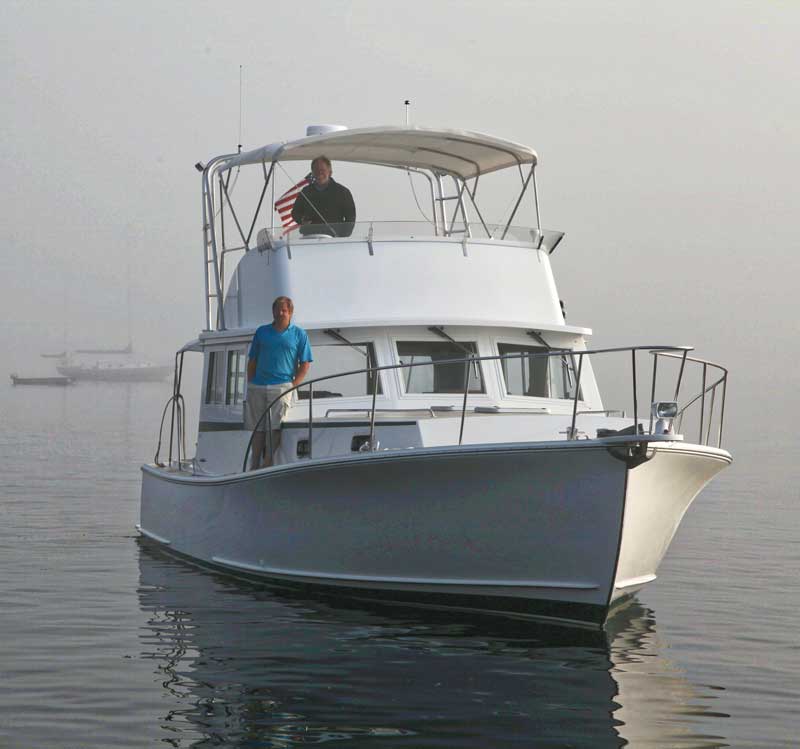 Don Ellis (top) and his son Shane are the second and third generations working at the boatyard founded by Bunker and Ellis. They are shown here on an Ellis 36 Flybridge Cruiser. Photo courtesy Ellis Boat Co.

At Ellis Boat, Don Ellis depended on his personal connections with customers to develop boat projects. Shane has added new technology and organizational capabilities, and introduced more ways to use computers.

At the 200-year-old Hodgdon Yachts in East Boothbay, Audrey Hodgdon is the sixth generation in her family to work at the yard. She is director of sales and marketing, working for her father Timothy Hodgdon, the company’s CEO and president.

“When your name is on the outside of the business, it means a lot to you,” Audrey said. “If it’s a family business, you’re going to do everything you can to keep it successful.”

In Thomaston, Drew Lyman took over the job as president of Lyman-Morse Boatbuilding from his father Cabot, who started the company with his wife Heidi in 1978. But his father is still there to offer advice.

“Dad lets me do what I need to do to run the company and learn from my mistakes and successes,” said Drew. “But he’s always there for me. So when I have a decision that needs to be fleshed out, he’s great to have as a sounding board.”

That’s the way it should be, said Cabot. “I always had the attitude that if my sons got involved in the business, I would get the hell out of the way. At that point, it’s time for the next generation to come in.”

The longest-lived passing-of-the-torch story belongs to the Hodgdon family, which has been building boats since 1816—approximately 450 vessels in 200 years. Like other kids with parents in the business, young Tim Hodgdon worked at the yard during school vacations in the 1970s, learning from his father and employees. After getting a degree in engineering from Wentworth Institute in Boston, Tim joined the company full-time in 1980. Under his leadership the company evolved and diversified, shifting from primarily plank-on-frame work to cold-molded and advanced composite construction, building large cruising and hi-tech racing sailboats and a broad spectrum of motoryachts, from high-speed express cruisers to projects for the U.S. Navy.

His daughter Audrey never expected that she’d work for the family business and credits her parents for not pressuring her. But after graduating in 2007 from college with a degree in marketing and working for firms as far away as New Zealand, she returned in 2014.

“It took going far away to realize this was where I wanted to be,” she said. “It’s an exciting place to be, and I enjoy the family dynamic.”

Unlike Audrey, Drew Lyman grew up working in the family business.

Cabot and Heidi Lyman moved to Maine in the late 1970s, and bought the century-old Morse Boatbuilding Company in Thomaston, forming Lyman-Morse Boatbuilding. Drew recalled working there during school vacations, earning $1 a day to sweep floors. While there was no pressure to join the business, he did eventually. Drew started the brokerage side of the company with his wife Mackenzie, and was named president in 2012. He’s diversified the company’s work, adding technical and metal fabrication, new construction, and marina services with the 2015 purchase of Wayfarer Marine in Camden. 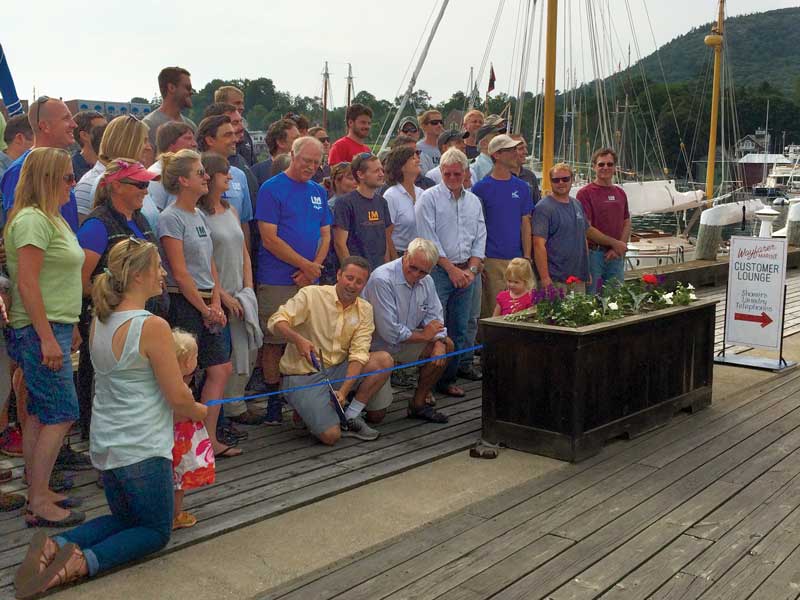 Drew Lyman, with his father Cabot watching at his side, cuts the ribbon officially opening Lyman-Morse at Wayfarer Marine. Photo by Polly Saltonstall

“He’s got a whole different management style, much more modern,” Cabot said of Drew. “A company that has a 30-year run—it’s time to make changes. I was more hands-on in the shop. He builds a more corporate business atmosphere. We needed that, to grow.”

Back in East Boothbay, Paul and Verna Luke started the Paul E. Luke Boatyard in 1939 specializing in wood and aluminum yacht construction, machining, and metal work. Their sons, Frank and John, grew up working in the yard.

“It was a fun place to be,” said Frank. “The fellows were just back from World War II and there wasn’t anything they couldn’t do or wouldn’t try.”

Frank and his wife, Nora, took over in 1992, adding infrastructure and services.

“When we took over, it was going to change and my father wasn’t going to like some of it, but that’s the way it was,” said Frank.

That happened again under the leadership of Frank and Nora’s son, Andrew, who returned in 2010 from a corporate marketing career in New York, bringing with him a next-gen perspective.

Said Frank, “Andy’s making of it what he wants it to be. Some I’ll accept and some I won’t like. But it’s his future, not mine.” 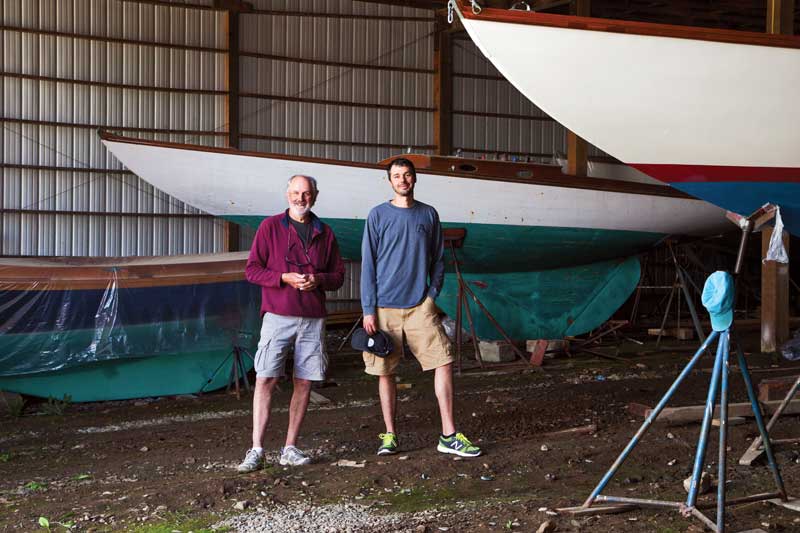 Gabe Pendleton (right) worked as an attorney before his father Stanley finally persuaded him to take over the boatyard four years ago. He has slowly been modernizing the business. Photo by Alison Langley

Out on Islesboro at Pendleton Yacht Yard, Gabe Pendleton had earned a law degree, and worked as an attorney for four years in Vermont and Brunswick, Maine, before his father Stanley finally persuaded him to take over the business four years ago. He has brought new organization systems to the business and added new technologies, including using email more to communicate with customers and vendors.

Up the coast in Seal Cove, Bob Vaughan’s grandfather, John F. “Jack” Vaughan discovered the area as a summer person in the 1920s, commuting weekly by steamer from Boston to his shorefront property in Brooksville. In 1936, Jack’s son John H. “Hal” Vaughan became a year-round resident and started what became Seal Cove Boatyard. Hal’s son, Bob, grew up around the yard, learning by doing.

“My father was not a person to give instruction,” said Bob. “If you were interested, you watched and learned.”

Thinking he did not want to become a boatbuilder, Bob became a lawyer instead. But when his father’s health began to fail, Bob returned home to run the yard.

Like his father, Bob’s son Sam also had other plans. Then after college and five years of big-city corporate work, Sam realized the yard was more in line with what he wanted out of life. He returned 10 years ago as second in command, quickly becoming the go-to for new boating technologies and materials and modern racing/rigging techniques.

“At this point, I’m trying to gain as much knowledge as I can and I doubt that will ever change,” said Sam, who values his father’s 50 years on the job.

On Great Cranberry Island, where Ed Gray started Newman and Gray Boatyard in the early 1990s with Jarvis Newman, Gray’s two sons have taken over the business. His older son Josh started working at the yard when he was 14 and found he liked the combination of physical and cerebral work. After college and a year at The Landing School studying yacht design, he leapt at the chance to buy the business when Ed wanted to retire. Josh’s brother Seth has since joined him as a partner.

“It couldn’t be better for me to have them take over,” said Ed. He joked, “I get free dock space.”

Some yards have passed to children and their spouses. John and Ingrid Kachmar purchased Wilbur Yachts in Manset from Ingrid’s parents, Lee Wilbur and Heidi Crock, in 2001. John had previously worked in the insurance industry in Portland. After the sale, Wilbur and Crock stayed on for two years, while the Kachmars learned the ropes in production and office operations.

“It was a vertical learning curve,” Ingrid said. “Jump in feet first and figure it out.”

In boatbuilding, the multi-generation experience sometimes means next gens watching their parents struggle with a lot of work for not a whole lot of money, but also seeing the excitement of finished products and happy customers, Don Ellis said.

“Some will follow in their parents’ footsteps because they like that,” he said. “Others will take a different path. But if they love it, they’re going to become involved in the business. That’s what you see in second- and third-generation boatyards—the kids fell in love with building boats. I don’t know of anybody who would take over a boat business because it makes so much money. It’s got to be something you enjoy doing.”