Of Fish and Ships 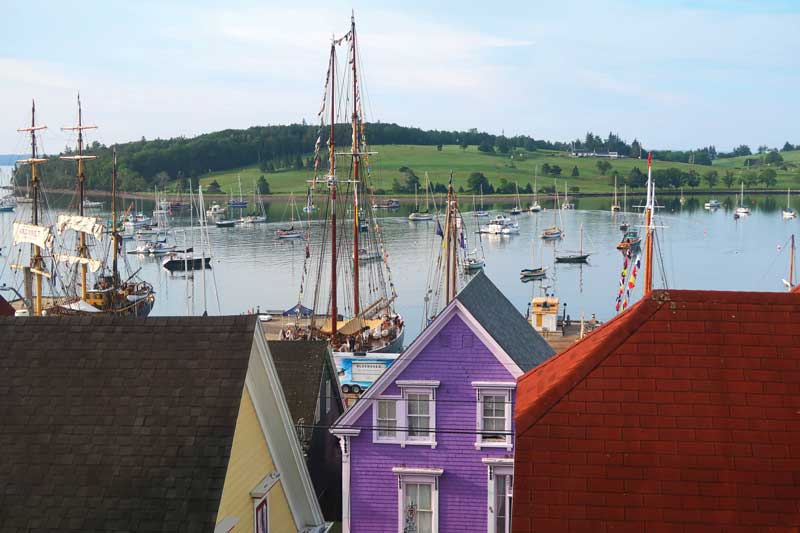 With a centuries-long legacy of wooden boatbuilding, Lunenburg is a magnet for classic vessels. Among them are fleets of tall ships, which visit about every four years. Photo by Rick & Mimi Steadman

It was 2 a.m. when we checked into the Lunenburg Arms Hotel. After a late arrival in Yarmouth on the CAT ferry from Portland, we’d driven nearly 150 miles along Nova Scotia’s south shore, parts of it in fog as thick as chowder. All we wanted was sleep.

Then I looked out the window: Towering above a huddle of wooden buildings on the waterfront were the illuminated spars of a dozen tall ships, in town as part of the Tall Ships RDV 2017. I could barely wait for morning to come.

“This was once the fishing capital of Canada,” Ashlee Feener, of Lunenburg Walking Tours, told us the next day as we followed her past crayon-colored houses on the picturesque streets of Old Town, a UNESCO World Heritage Site. An eighth-generation Lunenburger, Feener explained that when her German ancestors arrived in the mid-1700s, they tried farming, but the poor soil soon convinced them to harvest the sea instead. By the 1800s, Lunenburg-built boats and those who sailed them were renowned for their toughness and success.

“Those were the days of wooden ships and iron men,” Feener declared.

Today, that heritage attracts a steady stream of visiting traditional vessels in addition to the tall ships (which are expected to return in 2021).

Looking down the dockside lineup of classic beauties, I imagined the harbor a century ago, teeming with working schooners. Called salt bankers, they braved heavy seas and unforgiving weather on voyages to the Grand Banks off Newfoundland to spend weeks at a time catching cod and other groundfish. Each schooner carried multiple dories that were lowered overboard so the men could set and haul mile-long trawls. Once filled to the gunwales with fish, the dories returned to the mother ship, where the catch was cleaned, salted, and packed in the hold. When the schooners came home, Feener said, no one complained about the fishy odor: “It was the smell of money.”

The rock star of all Lunenburg schooners was the Bluenose. Built at Smith and Rhuland Shipyard in 1921, the 143-foot two-master was designed by William James Roué to compete against fishing schooners from Gloucester, Massachusetts, in the Halifax Herald North Atlantic Fisherman’s International Competition, an outgrowth of informal races among “Novi” and Yank vessels headed for the Grand Banks. Though the Bluenose did some fishing—and even landed a record catch—she earned near-mythic status by winning the competition five times. Captain Angus Walters is said to have boasted, “The wood ain’t growin’ yet that’ll beat the Bluenose.” An enduring symbol of Canadian pride, her image appears on the Nova Scotia license plate and has graced the country’s dime since 1937.

Sadly, the Bluenose sank off Haiti in 1946. In 1963, Smith and Rhuland launched a replica, built by a crew that included some who’d worked on the original boat. The Bluenose II underwent several refits over the years, but by 2010 was hogging severely and deemed beyond repair. A second Bluenose II—or Bluenose II-and-a-half, as some call her—slid down the ways in 2012. While she carries her predecessor’s rigging, sails, and deck structures, her hull and keel are entirely new. Home-ported in Lunenburg, the impressive vessel offers tours and two-hour sails when she’s not away fulfilling her duties as a goodwill ambassador.

As I studied her lines, especially her low freeboard aft, another boat came to mind: the schooner Sherman Zwicker, a floating exhibit at Bath’s Maine Maritime Museum for 29 summers. It turns out the Zwicker is a sistership to the original Bluenose, also designed by Roué and built at Smith and Rhuland (1942). For more than two decades, the Zwicker worked the Grand Banks before coming to Maine in 1969. She headed even farther from Lunenburg in 2014, when new owners took her to a berth on the Hudson River in New York City and set up a seasonal oyster bar on her aft deck. Supposedly the restaurant’s proceeds help maintain the vessel. 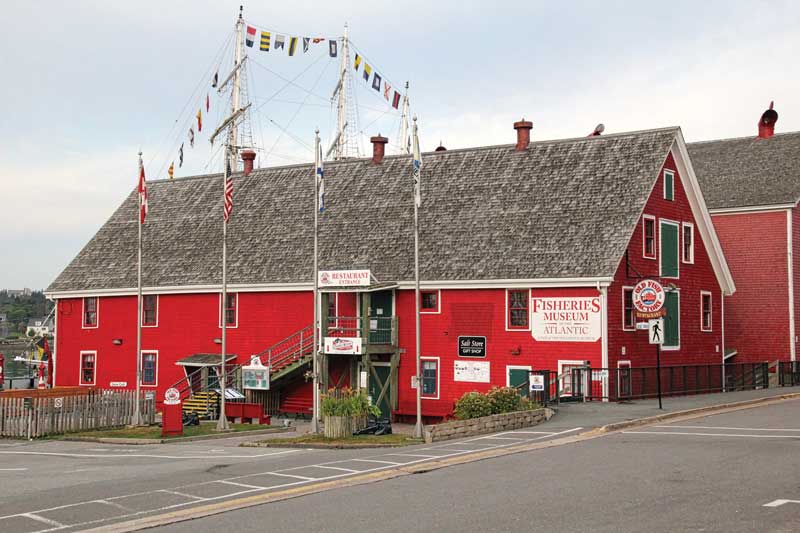 The Fisheries Museum of the Atlantic is appropriately housed in a rustic, old fish-processing plant. Photo by Rick & Mimi Steadman

Another sistership, the Theresa E. Connor (1938) is at home in Lunenburg, serving as a wharf-side exhibit at the Fisheries Museum of the Atlantic. Together with Cape Sable, a 1962 steel-hulled side trawler, she welcomes visitors on board to visit with old salts who share memories of offshore adventure.

For today’s fishermen, the quest is not for cod, but rather for deep-sea scallops and lobster. The fruits of their labor star on nearly every menu, including at the harbor-front Rum Runner Restaurant, where we ordered several scallop dishes.

Savoring the sweet taste of present-day Lunenburg, I thought about this little town’s long history—and how, from the beginning, it’s been seasoned by the rhythms of the sea.

CAT Ferry: The 349-foot passenger and car ferry makes the approximately six-hour run between Portland, Maine, and Yarmouth, Nova Scotia, five days a week May-October. To avoid getting to Lunenburg in the wee hours, consider booking a room in or near Yarmouth on your first night.  877-762-7245; ferries.ca/thecat

Lunenburg Arms Hotel: Just up the hill from the harbor, the Lunenburg Arms has welcoming staff (even late at night) and cozy, well-appointed rooms and suites in a nicely renovated, vintage building. Thanks to the hotel’s private lot, you can park once and explore on foot without parking-ticket worries. 800-679-4950; eden.travel/lunenburg

Rum Runner Inn and Restaurant: Directly across from the Fisheries Museum of the Atlantic, the Rum Runner’s name is a nod to the area’s lucrative, Prohibition-era smuggling enterprises. The inn offers a handful of very comfortable rooms with modern appointments. Those on the waterside include verandahs or porches overlooking the harbor. The restaurant specializes in exceptional, local seafood, plus authentic masalas prepared by the Indian chef/owner. 888-778-6786; rumrunnerinn.com

Lunenburg Walking Tours: Descended from a long line of Lunenburgers, co-owners Shelah Allen and Ashlee Feener are entertaining storytellers who infuse their tours with local knowledge. In addition to the daytime historical tour, there is a nighttime Haunted Lunenburg tour. $20 adults $10 youth, under 7 free. 902-521-6867; lunenburgwalkingtours.com

Fisheries Museum of the Atlantic: In red, wharf-side buildings that once housed a fish-processing plant, the museum exhibits are geared to all ages. The stars of the show are the vessels alongside the dock and the retired fishermen who demonstrate traditional skills. Open daily, late May through mid October. Adults $12, seniors $8, youth $3.50, family $26, under 6 free. 866-579-4909; fisheriesmuseum.novascotia.ca