“Today the summer has come to my window, with its sighs and murmurs; and the bees are plying their minstrelsy at the court of the flowering grove. Now it is time to sit quiet face to face with Thee and to sing dedication of life in this silent and overflowing leisure.”

May is the time when the green blades of grass rise to roll a fresh emerald carpet out over field, pasture, and lawn. May is also the time when grazing animals begin to feed on these fresh greens and jump for joy.

Years ago, your commentator worked on a dairy farm and orchard in the country. Sometime in early May the cows would be let out of the barn for their first taste of spring green. By then they had been smelling the new pastures for days, shuffling restlessly and lowing loudly from their stalls in the dairy barn, yearning to get out. When the big day came, every hand on the farm helped herd the cows into the first pasture.

When the barn door was opened, they came galloping pell-mell down the road while we stood waving our arms and jumping up and down to direct them off the road and through the gate into the pasture. I don’t know if you have ever seen a cow at a full-tilt gallop—let alone a hundred cows galloping straight at you—but it is an imposing sight. Then, after all the tumult of the stampede, all the bellowing and stomping, only the sound of crunching grass as a hundred golden Guernseys grazed across the new green sward in peace and tranquility. For days afterward we would taste the flavor of new grass in the milk we brought home from the storage tank in the main barn.

Our mountain meadows are showing signs of life, too, with new green pushing up through last year’s pale dead thatch. Sprinkled here and there like constellations in the sky can be found four-pointed bluets (Houstonia caerulea) or “Quaker ladies” as my mother used to call them. Soon, tiny blue and white violets will join them, spangling the meadows with color.

Getting to know the plants and animals that surround us in the countryside is a little like getting to know the neighbors in the city, only more so. It opens us up to all new possibilities, new insight and knowledge, new companionship and conviviality, and new joy. 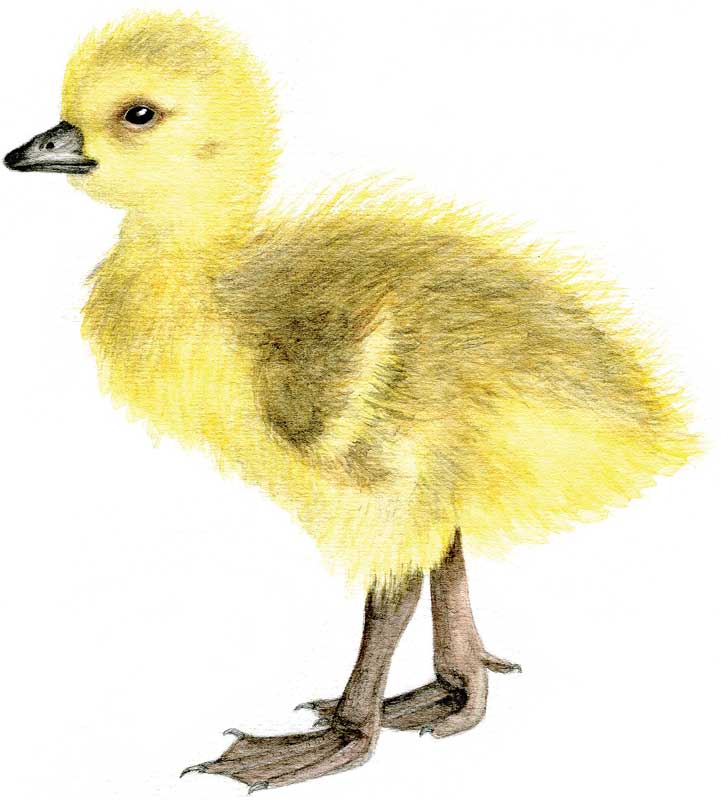 “Make way for goslings!” was the cry when a pair of stately adult Canada geese in shimmering black and gray led a procession of half a dozen fluffy goslings across busy Route 1 in East Machias this past week. Traffic backed up in both directions and drivers put their heads out the window to look while the elegant family made it safely to the other side.

Meanwhile, along the Mill Brook in Blue Hill, a mother duck scooted across High Street with six fuzzy mallard ducklings in her train. Mother hopped up on the curbstone and the six little ones, with much clucking and flapping of tiny wings, each tried and failed to do the same. Mother then calmly walked along the curbstone while the little ones followed in the gutter below until the curb ended and the tiny family was reunited.

And at our Moose Island field station, a crow family is tending its nest of young in a big fir tree at the edge of the field. Among crows, the young of the previous year help raise this year’s young, and in the case of this nest at least, they do it with a great show of aerobatic maneuvers, gymnastics, and raucous commentary, as though they want the whole neighborhood to know. And who can blame them? After all, this is the Greatest Show on Earth, this gift of new life.

The timeless procession of blossoms on wild fruit trees is under way, beginning with the tall, thin shrubs known as service berries (Amelanchier spp). Their white blossoms and copper background turn into berries that look much like the familiar blueberry and are edible, though without all the sweetness of their groundling neighbors. Next come the wild cherries—choke cherry (Prunus virginiana) and Black cherry (Prunus serotina)—followed by the Beach plum (Prunus maritima), which has single white five-petaled flowers, gray bark, and a purple fruit less than an inch in diameter which is sour, but edible. Beach plum is endangered due to the overdevelopment of its favorite habitat—beaches.

All of these wild fruit trees are coming into riotous bloom in the weeks ahead. Do not pass them by un-admired.

It’s breathtaking, really, how much the world around us has changed since the last full moon. It is easy to forget, over the course of a long winter—and every winter in Maine is a long winter—just how green everything becomes when spring sweeps in at last. It’s like going from Iceland to Ireland without even leaving home. The trees whose bare limbs were lately raised in supplication for the return of the sun now raise them in verdant praise to the great heavenly light which formed them and dressed them so lavishly. Where a short time ago, every plant had withdrawn into itself for its own survival, now billions upon billions of tiny solar cells burst forth to make food in abundance for all creatures and distribute it profligately in the ancient alchemy of life on earth. Underground, the vast unseen networks of roots and fungal mycelia are awakened to share food and moisture with each other far and wide.

From craggy hilltop to valley swale, flowers open their bright blossoms of intricate symmetry to pollination by wind or bug or bird. Perfumes fill the air. Birds of many colors add their songs. All that was bare and barren is now fertile and flushed with life, sharing what it has with every other creature with perfect generosity.

Like his tiny charges, the beekeeper is busy right about now. At the beginning of the blueberry bloom, the hives are brought onto the barrens early on a cool gray morning so that the bees will not be out of the hive or easily disturbed. Then the beekeeper and the grower both hope for some sunny warm days in the high 60s during the bloom so that the bees will get out and work the blueberry blossoms. If they do not, then there will be no blueberries for the grower and no honey for the beekeeper.

Another fear of the beekeeper is that a bear will be overcome by his raging sweet tooth and attack the hives. I’ve seen the sturdy wooden boxes that were bound to a wooden pallet with tough steel bands smashed to smithereens as though they were matchboxes. One bear was more delicate, neatly slipping the cover off one hive and partly removing one of the frames loaded with honey. My guess is that the job was done in the cool of night when the bees were nearly helpless to defend their treasure.

Harbor porpoises roll through the waves in pods of six to eight or more, blowing quickly as they arch over the water, then slipping just as quickly headfirst back into the water. Seals bob curiously, then point a nose up and slip back tail-first under the waves. 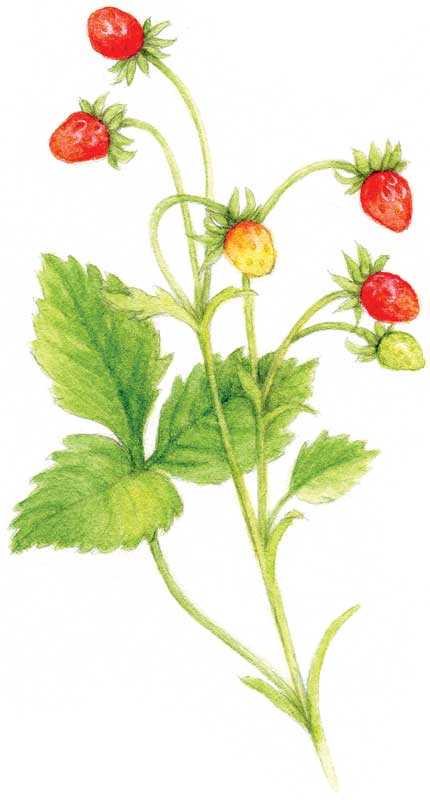 Wild strawberries are now ripe in secret places. You may have to get down on your knees to find them, if that won’t hurt too much. Their fruit is small but the flavor is concentrated and delicate. Wild strawberry patches are often well-guarded secrets, and a small jar of wild strawberry jelly is more valuable than King Solomon’s riches. Their fruit is bright red, attracting birds to spread the seeds. The bird helps the berry, and the berry helps the bird.

From Albert Einstein: “What I see in Nature is a magnificent structure that we can comprehend only very imperfectly, and that must fill a thinking person with a feeling of humility. This is a genuinely religious feeling that has nothing to do with mysticism.”