The Uncertain Future of Right Whales 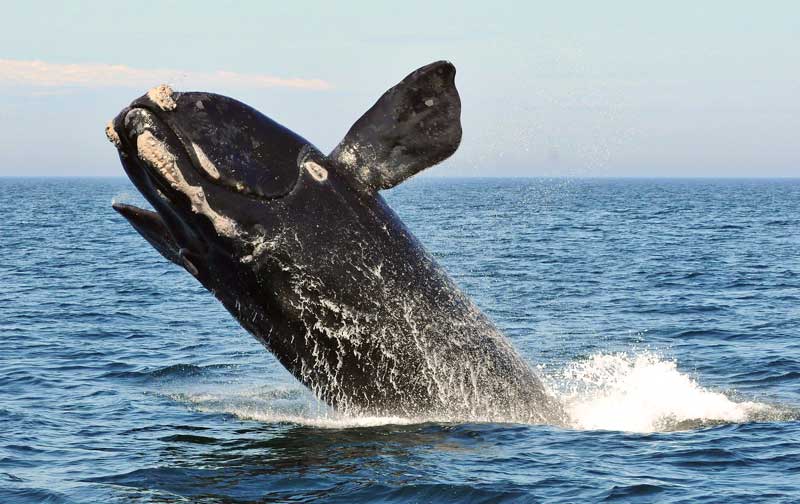 The first time I saw a right whale surface, her broad shoulders and snout surged up through the foaming water looking like a gigantic hippopotamus. Aside from her immense size, it was hard to believe this was a whale. Then the enormous, lumbering filter feeder opened her permanently frowning maw, which was almost as long as our boat, and chugged slowly away, sieving water through her baleen, and leaving a burbling, foamy wake.

I was lucky. Sightings like this are becoming rarer as the number of North Atlantic right whales declines, and their whereabouts are becoming ever more mysterious, especially off the shores of Maine.

Just after the turn of this last millennium, scientists described the North Atlantic right whale as a species at a crossroads. There were only about 300 left in the world, and some experts laid out possible timelines for extinction. Two prominent right whale scientists, Scott Kraus and Rosalind Rolland, wrote, “Human decisions over the next few decades will decide the survival or extinction of the species.” 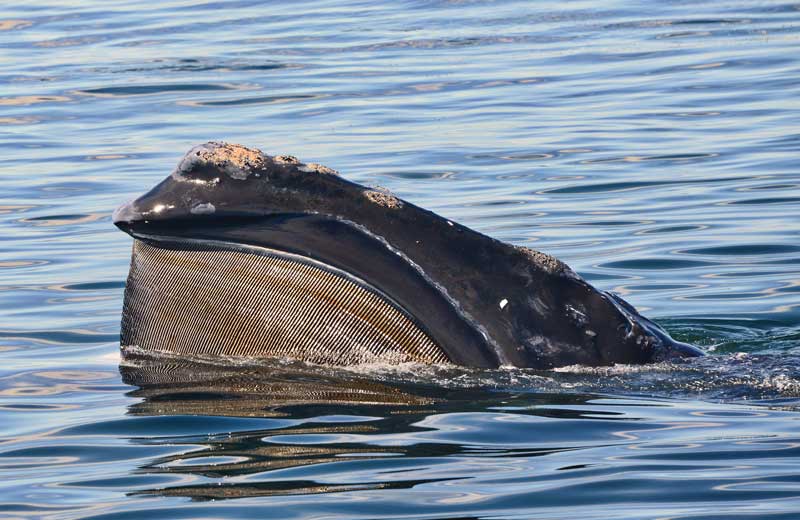 Right whales feed by gulping in large amounts of water and then filtering out tiny zooplankton such as copepods through baleen plates on either side of their mouth. An adult whale won’t begin feeding until he or she encounters extremely dense concentrations of zooplankton, i.e. 3,000-4,000 rice-grain-sized animals per cubic meter. Photo courtesy Anderson Cabot Center, New England Aquarium. NOAA/NMFS Permit #15415

This was around the time I first started studying right whales. At the 2007 meeting of the North Atlantic Right Whale Consortium in New Bedford, Massachusetts, I was struck by the cross-disciplinary character of the science—everything from computer models to flensing knife necropsies—as well as by the passion of the scientists. People referred to individual whales by name and could sometimes recount a whale’s personal history. Also striking was that the total number of remaining North Atlantic right whales was roughly the same as the number of attendees at that meeting.

To understand how right whales declined to that point, it helps to go back to a time when they numbered in the tens of thousands. This would have been many centuries ago, at a time when salmon were still the size of people, and the sun was sometimes eclipsed for days by gigantic aggregations of passenger pigeons. Many coastal embayments teemed with right whales—so much so that at certain times of year, hunters could set out from shore and capture them. Whales were a popular target because of their slow speeds, their large oil yields, and the fact that they would usually float after being killed—hence the “right” whale to hunt.

The worldwide commercial hunt—arguably the first “Big Oil”—was probably begun on a small scale around the 11th century by Basque whalers in European waters and increased substantially during the colonial period.  As seafaring technology improved and global trade grew, what was once seen as an abundant resource was systematically depleted, first in the North Atlantic, and then throughout the world’s oceans.

By the 20th century, many whale populations had collapsed, and probably fewer than a thousand North Atlantic right whales remained. This century shepherded in a near-global ban on whaling, the Endangered Species Act, the Marine Mammal Protection Act, and ultimately a Northern Right Whale Recovery Plan in 1991. Genetic data gives us estimates of the low point in the population; it seems that North Atlantic right whales bottomed out at perhaps several dozen individuals. By 2000, the situation had improved slightly, but even in the absence of a whale hunt, the species has had a hard time recovering.

If it seems strange that right whales haven’t recovered despite the whaling ban, try to think of it from the whale’s point of view. Start by imagining that you have to grow a 2,000-pound baby, and you can only eat fleas. Despite its immensity, the right whale subsists on copepods—tiny flea-sized crustaceans. They must find and consume enough copepods to pack on fat for winter, to power their long migrations, and, for the females, to grow and then nurse the calves. Because of these requirements, a right whale cow can produce at most one calf every three years, and that’s when feeding conditions are at their best. This is why the population grows so slowly. It’s also why right whales spend so much of their time in the Gulf of Maine—they’ve found those special places where the fattiest copepods are most plentiful. 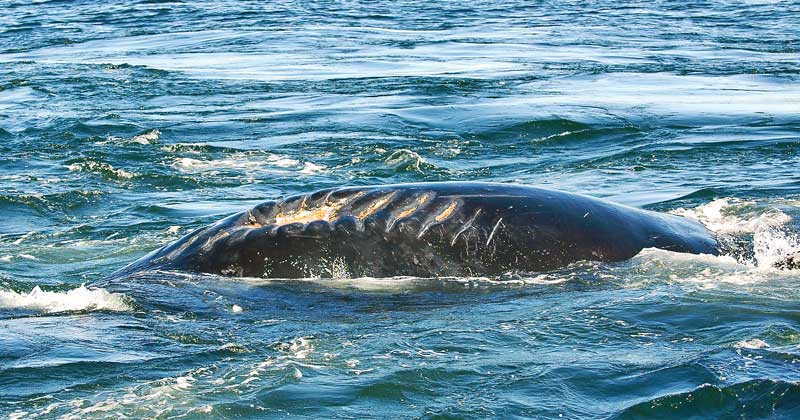 The whale known as Caterpillar, shown here in the Bay of Fundy in 2007, was struck by a vessel and left with large propeller cuts on her body. Her wounds healed, and she was last seen in Cape Cod Bay in 2017. But there is concern that if she ever becomes pregnant, the wounds may become a problem. Photo courtesy Anderson Cabot Center, New England Aquarium

Unfortunately, these productive locations also are where humans choose to live and fish. This is highly dangerous for right whales because of ship strikes and entanglements in fishing gear. These remain major sources of mortality and are the focus of management efforts.

Preventing even a few deaths per year, especially for females, could make all the difference. Essentially, as Kraus and Rolland wrote, saving the species boils down to how well we manage these human activities.

Over the past 20 years or so, reducing whale entanglements and ship strikes has required collaboration between scientists, government agencies, conservation groups, and the shipping and fishing industries. The challenge of bringing these groups together, with their often competing interests, is in many ways an analog for so many of the environmental challenges we face. Proposed changes in fishing and shipping practices can be costly to the industry and to the economy, and on top of that, our lifestyles depend on global trade and food. On the other hand, business as usual means the extinction of the species.

The sequence of negotiations, agreements, sacrifices, and victories could fill a novel. Shipping lanes were moved and speed limits imposed. Gear modifications were required for lobster traps. Buoys with microphones were deployed to listen for whale calls. And fearless mariners—many from the fishing industry—time and again took on the precarious task of freeing entangled whales from lines wrapped around their appendages and through their mouths.

None of this came easy, but all of these efforts together seemed to make a difference. Emerging from the convening, coordinating, and collaborating was a turning of the tide. Through much of the early 2000s, the population was rebuilding, and the outlook improved. 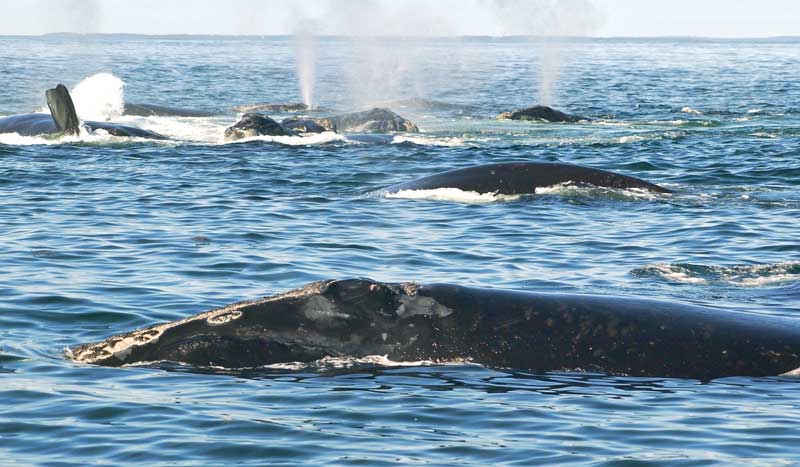 A group of more than 10 right whales in the Bay of Fundy in 2005. Photo courtesy Anderson Cabot Center, New England Aquarium

Then, within the past few years, something changed. Right whales seemed to gradually abandon the Bay of Fundy feeding grounds. This was one of those prime locations, right near the Maine-New Brunswick border, that right whales visited every year. It was a place where fatty copepods clumped together in huge numbers, and right whales could get a final, filling meal at the end of the summer before a long winter fast. Now, the oceanography has changed, and the copepods don’t seem to collect there anymore. Consequently, neither do the whales.

In 2017, some 17 right whale mortalities were reported. Most of these came in the late summer, when right whales would normally be in the Bay of Fundy, under close watch and under various protective measures. Instead, they were popping up in unexpected places, like the Gulf of St. Lawrence, where protections were not in place. Seventeen deaths in a population of only 450 is a massive blow, and if that rate holds, many are concerned that the North Atlantic right whale once again faces extinction.

The story is still unfolding, and both the United States and Canada are taking action to protect right whales in new locations. The events occurring this summer will tell us a lot about the right whale’s chances.

So many of our environmental challenges—from climate change to pollution to deforestation—face a similar tension between short-term interests and the sustained health of our environment. All of the efforts to prevent a right whale extinction can teach us lessons useful for many other environmental challenges. One lesson is that compromise and progress are possible. Despite competing interests, many sides came to the table and were able to take positive steps. It will be useful to remember that fact, as the environment begins to change more rapidly in the coming years. It’s a reason for hope.

A second lesson, though, is that the earth can move quickly under our feet. So much effort in right whale recovery was based on the notion that the seasonal patterns in the ocean would stay the same, that right whales would return to the same locations at the same times each year.

Over the past decade, the Gulf of Maine has been a case study in rapid change. It has warmed at rates not seen elsewhere in the ocean, but that are certain to occur elsewhere in the future. We need to adjust our mode of thinking so that we expect rapid changes and surprises of all kinds. Right whales are among many animals that are trying to adapt to a rapidly changing environment, and we will have to do the same.

Thanks to Dan Pendleton of the Anderson Cabot Center, New England Aquarium for photos.