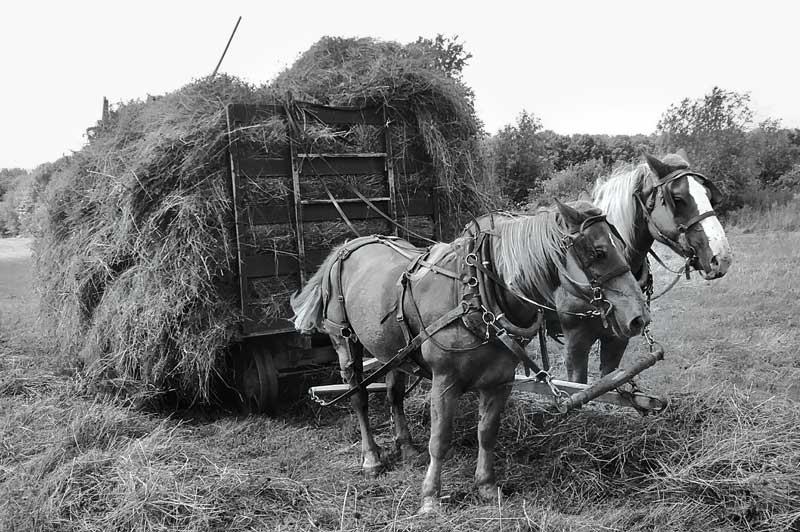 Florian Yeaton, the author’s maternal grandfather, farmed with teams of horses from 1904 until his death in 1972. His partnership with horses was based on mutual trust, caring, and understanding. Yeaton distrusted machinery. Photo by Ron Joseph

The dusty shoebox I brought down from my attic held black-and-white family photographs from the 1960s. Here was one of my Grandpa’s workhorses. Here was the beloved 1946 one-and-a-half-ton Dodge hay truck. And here was my grandmother, a teetotaler, looking annoyed while hiding Grandpa’s beer bottle behind her back, out of view.

Here was a shot of my 8-year-old twin brother Don, right after he had asked our grandfather, “Why can’t secrets be kept on farms?” Before Grandpa could answer, Don had blurted the punchline, “Because potatoes have eyes and corn stalks have ears!” I recall Grandpa laughing heartily, just as he had many times before at the stale joke. 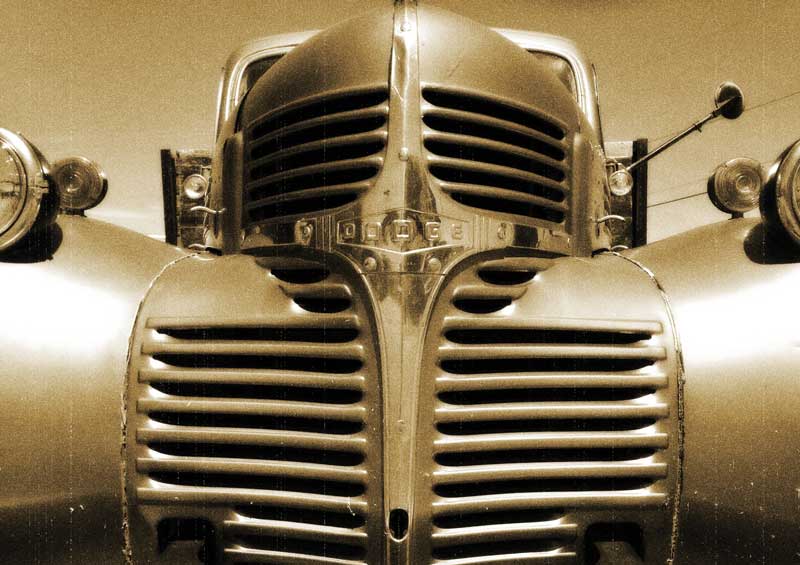 Most of the pictures were shot by my mother on the Mercer, Maine, dairy farm of my maternal grandparents, Florian and Lucille Yeaton. Cousins, aunts, and uncles gathered there to harvest hay for draft horses and 18 Jersey cows, the maximum number Grandpa could milk by hand. We boys hauled pails of hand-pumped well water to hay workers; the girls helped prepare meals and deliver grandmother’s hand-churned butter to an ice box in a self-service stand at the end of the driveway. The bright yellow butter, stamped with a carved wooden bluebird, won numerous blue ribbons at the Skowhegan State Fair.

My oldest cousin Dickey, owner of a commercial hay-harvesting business, mowed, raked, and baled Grandpa’s hay from dawn until dusk. I became smitten with Dickey’s 1946 Dodge truck. By 1966, age 14, I drove it regularly, my legs barely reaching the floorboards. “Stick with the first two gears,” Dickey instructed. “This isn’t the Indy 500.”

“She’s a big-hearted, forgiving truck,” he added reverently. That summer my infatuation with the Dodge morphed into love. Six years my senior, she patiently tolerated my gear grinding, tentativeness, and inexperience.

My first week behind the wheel, Dickey took control of the loaded hay truck as it approached the barnyard. One afternoon he said, “Drive her into the barn.” Once inside, I turned off the engine, set the parking brake, and hopped onto the barn floor, feeling like I’d taken a giant step toward adulthood.

Uncle Ernold, unloading hay, sensed my youthful restlessness, and cautioned, “Don’t be in a hurry to grow up.” Years later I learned that World War II had abruptly ended his youth. Captured by the Nazis in 1944, Ernold was a living skeleton by war’s end, having survived one-and-a-half years in Stalag Luft IV, a prisoner of war camp in Poland. After the war, he refused to eat turnips for the rest of his life.

One August, Grandpa sat next to me in the cab after twisting a knee stepping into a woodchuck hole. “It has an 84-horse power engine,” I said, shifting gears. He was unmoved. “Think of it this way,” I added. “There are 42 teams of your workhorses under the hood.” He grudgingly complimented the truck, “She’s built like a brick outhouse”—high praise from a 71-year-old who had never lived in a home with a flush toilet and indoor plumbing. (When Grandpa died in 1972, a few days after the farmhouse was equipped with a flush toilet and washbasin, mother wept as she joked, “Indoor plumbing must have killed him.”) 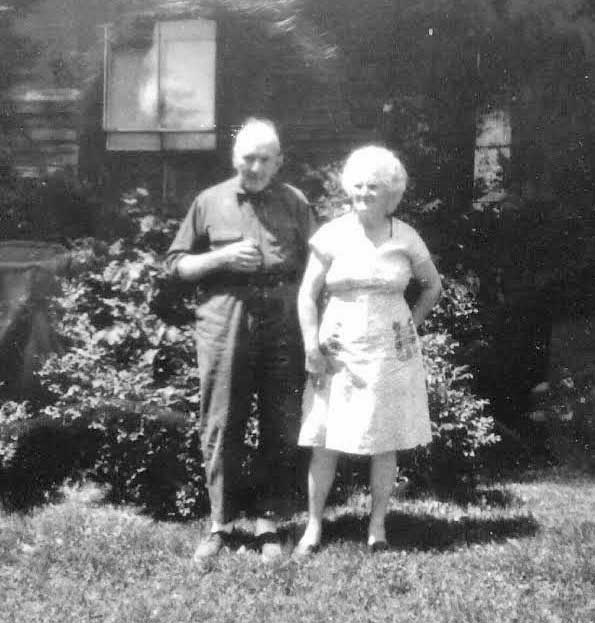 The author's grandparents, Florian and Lucille Yeaton. His teetotaler grandmother is hiding his grandfather's beer bottle behind her back. Courtesy the author/Yeaton Family Photo Grandpa couldn’t understand why farmers discarded beasts of burden for machinery. “Lame horses and oxen,” he said, “only need rest, not expensive replacement parts.” Machinery sold by “city slickers” meant debt; and mounting farm debt, he believed, had caused his brother Ben to commit suicide by attaching a hose to an idling tractor’s exhaust pipe and snaking it into his truck’s cab. Ben had gambled the previous spring by planting potatoes on 200 acres of leased land: in early September, a few weeks before harvest, blight destroyed his cash crop.

In the wake of Ben’s death, a salesman stopped at the farm to pitch a McCormick Farmall tractor. Although illiterate, Grandpa read his intentions a mile away. “Damn tractors!” he barked at the man. “Exhaust from a horse might make a man’s eyes water, but it sure as hell won’t kill him.”

I loved driving machinery, especially tractors and hay trucks, while working summers for my cousin Dickey. I spent my $1.25 per hour wages on two-tone wingtip shoes, corduroy slacks, and snazzy button-down shirts. Each Saturday afternoon, I hitchhiked to Smithfield with a duffel bag of clean clothes, bathed with Ivory soap in North Pond, and dressed in Mr. Perkin’s filling station’s rest room. From there, I walked to the Fairview Grange, purchased a baked bean supper for 50 cents, then scooted next door to the Sunbeam Roller Rink, a wholesome teenage hangout. Those were heady days: I had money, dapper clothes, beans and pie in my belly, and a hunger to meet cute girls.

Most teenage boys carried photographs of girlfriends. Not me. My billfold held a black-and-white picture of the 1946 Dodge truck, which I showed to girls, regaling them with tales of my driving feats, including squeezing a loaded hay truck through narrow sliding barn doors. With a little luck, a pigtailed girl would smack her gum, grab my hand, and pull me onto the maple floor. Luckier still, a loud jukebox would play “96 Tears” and “Cherish.” The rink floor, though, is where my luck ended: I was an inept skater, unable to maneuver as well on eight wheels as I could on four on a hayfield.

All those memories were formed many decades ago, but each has become more precious with age. The Yeaton farm, sold in 2003, had been in the family since 1790. My grandparents, parents, aunts, and uncles have all died, many years ago now. Dickey—sturdy as an oak in one photo—lives today in a nursing home. The Dodge—with her magnificently curved fenders, flathead six-cylinder engine, and beefy bumpers—was sold to a scrap metal dealer. Grandpa’s last team of workhorses was sold to a Connecticut glue and horsehair blanket factory. Grammy, a proud, stoic Yankee, cried the day the old, arthritic horses were hauled away. They were the farm’s heart and soul.

I stuffed the photos back in the box and found solace in Bob Dylan’s song “Forever Young.” The poetic lyrics were tonic, transporting me to an August 1961 evening on the farm, years before the farmhouse was wired for electricity. My twin and I are sitting in wicker chairs on the porch next to our silent grandparents. The sound of a cowbell comes softly from the barn. The air is heavy with the sweet scent of new-mown hay. Grammy finishes darning Grandpa’s wool socks. Dusk yields to darkness. The stillness is interrupted by chirping crickets and clucks of a rogue chicken, announcing the laying of an egg in a nearby rosebush. Grandpa lights a kerosene lantern, tucks the hen under his arm, hands the warm egg to Grammy, and in a halo of light carries the hen to the henhouse. The creaky screen door opens, and Grammy walks us to our bedroom holding a lit candle, and saying, “Goodnight my young’uns. Sweet dreams.”