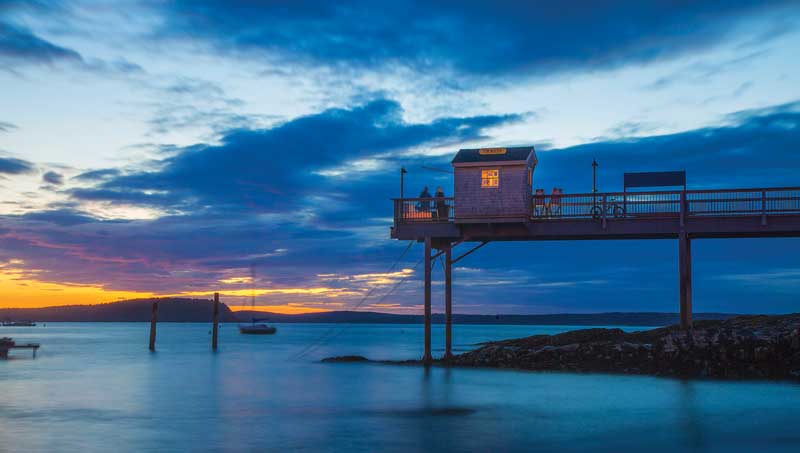 No one knows if William Shakespeare was a sailor, though many experts insist there’s plenty of evidence he was at some point during his life. His plays include many nautical references, detailed maritime scenes, and quite a few swashbuckling characters.

At this time of year, one line in particular stands out: “I desire no more delight, than to be under sail, and gone tonight,” Gratiano tells his friend Antonio, just before undertaking a long voyage in The Merchant of Venice.

Four hundred years later, I feel the same way as autumn days shorten and sailing along the Maine coast at night becomes increasingly likely. Light becomes a whole different subject when in the dark at sea. Unlike homes, streets, and highways on land, more man-made light is definitely not better offshore. In fact, less light is good and minimal natural light is best.

“Night vision” is the eyes’ ability to amplify very low light levels to discern objects both near and far. Even on a moonless night, I’ve found night vision alone is sufficient to see coastal ledges, tiny islands, breaking surf, and even whales breaching a mile or two away. Whales evidently don’t sleep through the night and seeing one by starlight alone is an unforgettable sight.

Under sail in the darkness, you can see the entire cosmos. Before moonrise, the magnificence of galaxies, solar systems, stars, planets, gases, and forgotten novas above is beyond impressive—it’s downright distracting. And as a practical matter, cosmic light provides the added bonus of illuminating deck hardware, running rigging, cleats, stanchions, and that mug of steaming tea next to the helm. It redefines the infinitive verb “to gaze.”

The vastness of light from above is often complemented by light from the waters below. At times, Maine coastal waters light up with bioluminescence created by tiny critters living near the sea’s surface. These microscopic organisms, called dinoflagellates, glow bluish-white when the waters around them are disturbed by an object passing through a concentration of them.

Lately, the waters around Castine and Acadia have gained a reputation as places to find bioluminescence. I’ve spotted it elsewhere along the coast, as well. Sometimes a floating log lights up the water like a carnival ride, at other times a school of nocturnal fish excite their tiny neighbors. It’s hit-or-miss light but worthy of a long sail through the night.

What is not hit-or-miss are Maine’s lighthouses, which when seen from well offshore bring an instant sigh of relief and pleasure. Perhaps their guidance and reliability instilled the same sense of delight in Shakespeare when he voyaged far from The Globe Theater. Lighthouses then were essentially the same as lighthouses today. Four hundred years doesn’t much change the delights of sailing at night.