The irresistable draw of the Hurricane Island pulling boat 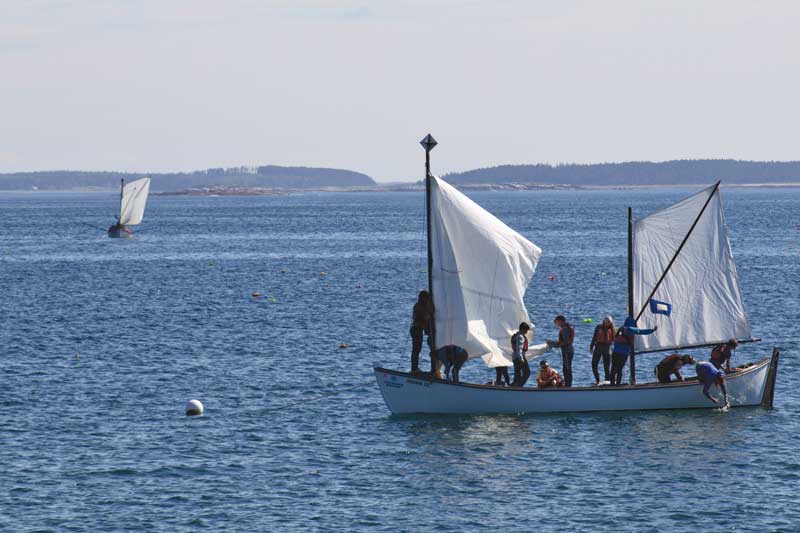 A pulling boat leaves the mooring and heads out for an expedition of learning, teaching, and service. The maritime signal flag of a white square on a blue background—often called the “blue Peter”—signals in harbor that all should report aboard and prepare to head to sea. The vessel is “Outward Bound.”

“What is that?” I asked with my hands as much as my words. They pointed in the direction of vessels that were emerging from the early morning fog, silent but for an intermittent tinny horn. One long drone followed by two short blasts—the “Hey, we are here” call of a sailing vessel under way in the fog.

We were anchored just off the eastern end of the Fox Island Thorofare, the channel of water that separates the islands of North Haven and Vinalhaven. In a hybrid swirl of fog and wind-driven rain, I was cold in my wool sweater and foulies. The dark green water merged with the gray wet air in a way that hid the horizon and made me cherish the comfort of being at anchor, knowing exactly where we were on the chart.

The subtle lines of two masts, then four, came into view, revealing two sailing vessels that were actually sailing in this weather. They were open-hulled like old-time lifeboats. Their sailing rigs were sprit-rigged ketches. Like mysterious nautical avatars, each boat held in its fold at least 10 hunched people, hooded with foul weather gear and wearing PFDs, a stoic lookout perched tightly before the mast, wedged in the V between breast hook and gunwales. At the other end, a fellow shipmate held a wet hand on the tiller.

Down the starboard side of our schooner they floated by, close enough for me to behold the wondrous scene in detail. It was early in the morning, and most of the guests on our boat were still warm in their cabins or in the cozy glow of the pre-breakfast galley. I looked at the other mate on deck with me, and gestured toward the boats.

“Those are pulling boats. They’re from the Hurricane Island Outward Bound School,” he said.

The course of my life changed in that moment. I knew I’d seen my next job. What I didn’t know was how much that next job would change my life.

Before the next summer, I became an instructor at Outward Bound. It would be on a pulling boat that I would meet my future wife, get a serious start on learning the infinite intricacies of the downeast coast, learn about teaching, and learning and living together in close quarters. And it was in that role, in those boats, that I would decide to make a life in Maine.

Looking back on it now, from many years and miles away, there is a temptation to package these memories as the fruits of some kind of convenient plan. But there was nothing convenient about it. What is good and worth doing has nothing to do with convenience. 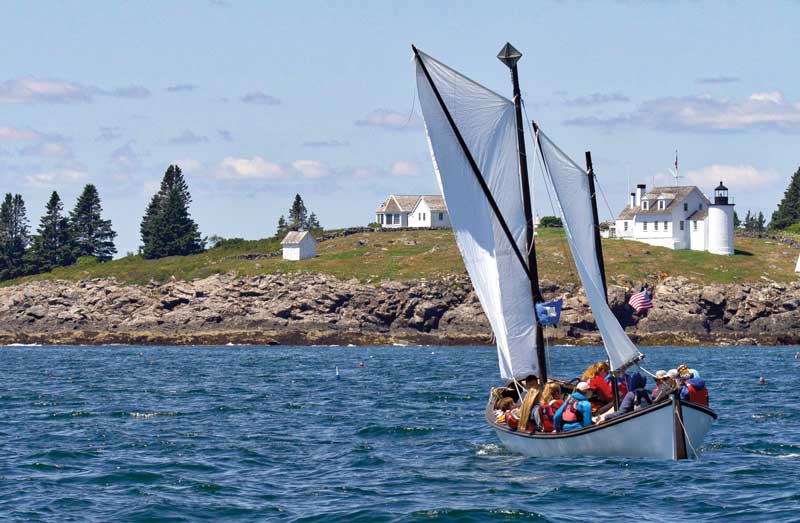 Pulling boats of the Hurricane Island Outward Bound School carry their crews for expeditions of service and learning. The weather isn’t always as nice as this moment off Southern Island near Tenants Harbor.

The pulling boat and group effort

There is an idea that I call the “False Virtue of Convenience.” The pulling boat in many ways is emblematic of this principle.

A Hurricane Island Pulling Boat looks much like a sailing lifeboat, and it kind of is, having much of the same genetic material as the old rescue vessels from the lifesaving stations of Monomoy on Cape Cod. It is 30' long with a 8' beam, double-ended with (almost) elegant sweeps of sheer at the bow and stern. The freeboard of a loaded pulling boat is low, to accommodate eight rowing stations, four on each side. It draws almost 3' with the centerboard down; with the board up, the boat can be taken safely into the tightest and shallowest corners of the coast.

When Peter Willauer, the founder of the Hurricane Island Outward Bound School, was looking for the right boat, one that could be safe in a sea, nimble in tight spots, truly sailable, and truly rowable, he commissioned Maine’s own Cyrus Hamlin for the task. (Hamlin was known, among other accomplishments, for designing yawls for the U.S. Naval Academy as well as the iconic Hudson River sloop Clearwater.) Befitting of Maine’s ethos, the pulling boats were built of wood, strip planked of cedar. 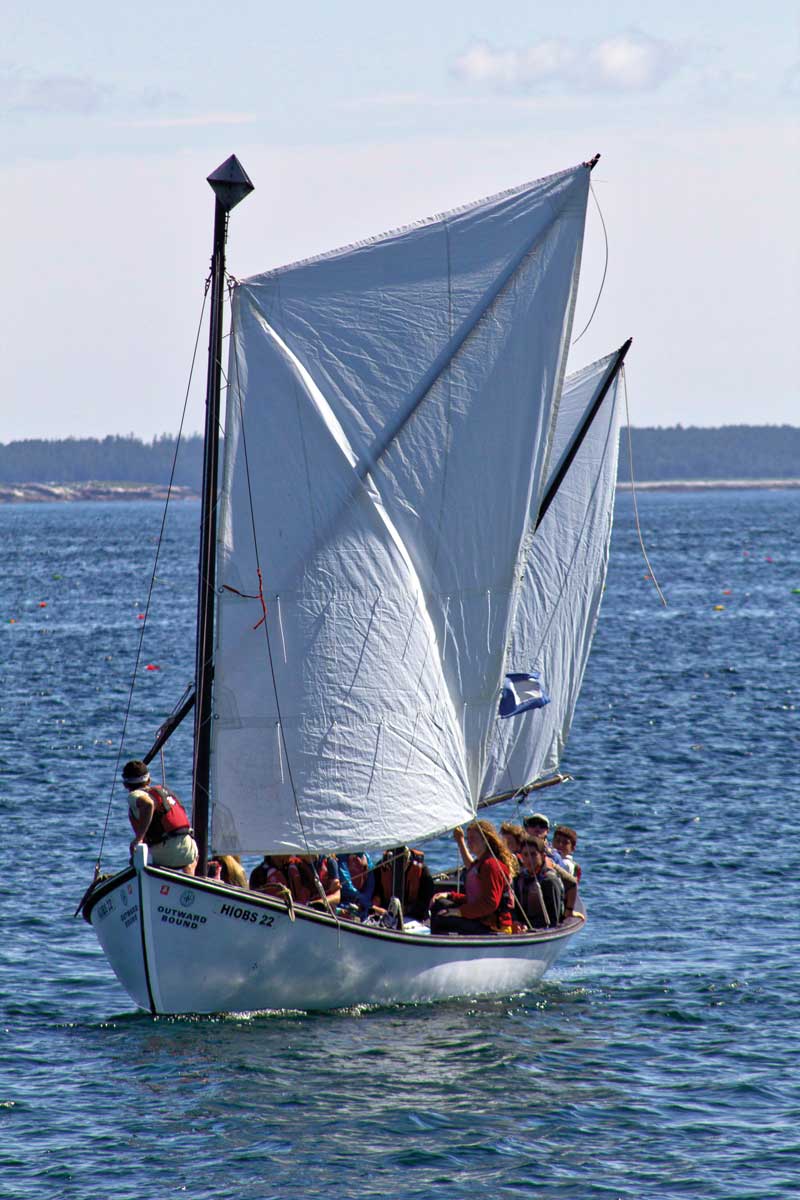 The pulling boat’s stout rig affords a variety of sail combinations for teaching, learning, and adapting to the conditions. The four-sided mainsail and mizzen can be reefed or scandalized as needed in a blow. They can be set full for broad reaches and they can be set in useful opposition to demonstrate heaving to. The pulling boat is the biggest little boat I know of.

For a small vessel, it is marvel of intentional inconvenience. There are few tasks on a pulling boat that can be achieved single-handedly. As someone who has been blessed with a lifetime of messing about in boats, from dinghies as a boy to being a professional captain and crew for fine sailing yachts, I still cherish the experience of self-reliance that comes with single-handed sailing. It might therefore be a curious thing to honor and cherish the virtues of inconvenience that life on a pulling boat teaches.

Let me try to explain with an example: When setting the mainsail on a pulling boat, there is an inherent need to work together. This is by design. In the starting position, the sail is furled against the mast; the halyard is secured; the luff of the mainsail is taut from the throat cringle to the tack. Everything is taught by showing, by doing, and by doing together. So the main is unfurled carefully by unwinding the spare flag halyard. Someone grabs the lanyard of the peak and holds it in place while another set of hands guides the tapered end of the mainsail sprit into the bight of line spliced into the highest corner of the sail. Then two or three others shove the 14' sprit aloft with a careful heave, warning the rest of the crew with a cheerful “Sprit coming up!” Other students weave the main sheets aft to the cleats on each rail. Then they stand by, reminding others that they’re ready. Then another lanyard with the endearing name of “the snotter” that lives on the lower end of the spar, is led through an eyebolt on the side of the mast, through the crotch end of a bowline, and then back up. Then with a careful but vigorous shove it is set into a working tension with a secure slip knot, backed up with a little safety hitch.

Six students are involved in setting the main. Could there be a more efficient system to get a mainsail up and set? Of course. But pulling boats are not built for convenience. They have a higher purpose. They teach people to live, work, and learn together in all sorts of conditions, from calm afternoon coves, to cold, wet mornings. The paradoxical truth about the pulling boat’s pedagogy of inconvenience is that this open-boat classroom on the coast of Maine is a wonderful way for a group of strangers to become a crew, and a community.

When I look back on that foggy morning and all the experiences and lessons and adventures that followed, I am grateful for the unplanned inconveniences that make up a full life. Foolish risk is never to be revered—and it is a proud comfort that in 50 years of pulling boats going to sea their safety record is second to none. But a life without risk, without challenge and adventure, is short on wonder and wisdom. I am reminded of a picture of a schooner and a saying that hung in my room when I was a child, years before I ever washed ashore on the coast of Maine. You may know the line: “A ship in a harbor is safe, but that is not what ships are built for.”

Jeffrey C. Lewis lives on the central coast of California, but midcoast Maine is home.

Winter Days in the Maine Woods