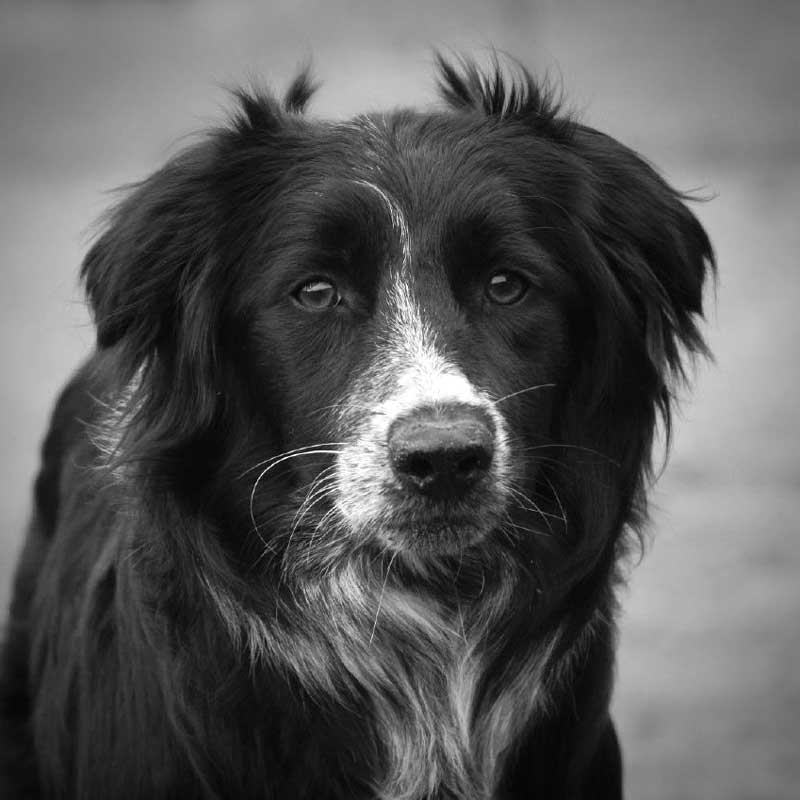 Bonnie and other beloved border collies were used by the author’s grandparents to herd sheep, dairy cows, and an occasional wayward grandchild. Photo courtesy Becky Beckmann

It was shortly after midnight on October 8, 1961, when my then nine-year-old twin Don and I were awakened in our grandparents’ farmhouse by their dog Bonnie. Alarmed, we sat upright and hollered, “Why is Bonnie growling at the foot of our bed?” In the bedroom next to ours, Grandpa’s hushed answer, intended for Grammy, was terrifying: “There might be a bear in the barnyard. Yesterday she found tracks in the apple orchard.”

He lit a kerosene lantern and quietly dressed. We followed Bonnie to the kitchen, where she whined to be let out. “You boys go back to bed,” ordered Grammy while opening the kitchen door. The border collie sprinted to the pigpen silhouetted beneath a brilliant Harvest Moon. Grandpa stepped into the moonlight carrying a 12-gauge shotgun and the lantern. Sleep for us, though, was impossible amid the frightening sounds of squealing pigs and Bonnie’s angry barks.

A single shotgun blast echoed across our dairy farm. Ten agonizing minutes later the pair returned to the kitchen. “Bonnie chased a big bear from the pigpen,” Grandpa reported. “The door is all stove-up, but the hogs are okay.” (Two nights later neighbor Ralph True shot the 490-pound bruin after it killed one of his sheep. The bear’s paws, he told Grandpa, were “the size of dinner plates.”)

At breakfast the following morning, Don and I were mesmerized by Grammy’s stories of the 13-year-old dog’s heroics. When we were infants, Bonnie had protected our five-year-old brother Robert from a rabid fox by nipping the boy’s hindquarters, herding him from the pasture to the barnyard as if he were a disobedient sheep.

Months later when Robert started a barn fire, Bonnie’s incessant barks sounded the alarm. Grandpa doused flames with pails of rainwater from the cistern, mother frantically tossed wet blankets on the fire and removed livestock from the barn, and Grammy hand-cranked her wall phone to contact the local Ma Bell switchboard operator Beatrice. Bea was well suited to convey pleas of help because she monitored residents’ whereabouts by eavesdropping on phone conversations. “An acorn doesn’t fall from a town oak without Bea’s knowledge,” Grammy often grumbled.

Clarence, the village blacksmith, responded to Bea’s call by helping to extinguish the blaze. His reputation, though, as an unscrupulous barterer made Grandpa wary. “Would you trade that dog for a scythe and a rebuilt hay-rig?” he inquired. Grandpa had anticipated a preposterous offer. “I wouldn’t trade Bonnie for your 90 acres of cleared land,” he responded, spitting out a plug of chewing tobacco. With that, Grandpa dismissed the insult, thanked Clarence, and disappeared into the barn.   Clarence had no way of knowing that Grandpa and Bonnie began forging a close bond even before her arrival on the farm as a sickly litter runt in 1948. When my grandparents evaluated a bitch’s litter in Farmington, Bonnie’s fearless battles with litter mates twice her size struck a chord with Grandpa. Although illiterate, he easily read her can-do spirit. After Bonnie arrived on our farm wrapped in a horsehair blanket, however, Grandpa’s faith in the pup was tested when her health deteriorated. Despite supplements to her diet of warm bottled goat milk, Bonnie continued to lose weight. At wit’s end, Grammy moved Bonnie from a warm floor behind the kitchen wood stove to the pigpen where a sow nursed newborn piglets. “We’ll know by morning if the sow adopts her,” she said to my grandfather.

For a week Bonnie barely took a breath, too busy suckling a hind teat alongside six nursing piglets. Her weight quadrupled in the care of the 300-pound surrogate mother. Optimism, however, was dampened by worrisome questions: had she imprinted on the pigs; was her social and physical development impaired? Those fears evaporated as Bonnie quickly matured into a tireless worker and loyal family dog.

One hot summer day in 1958 she further demonstrated her mettle as a trustworthy watchdog. My twin brother Don waded into the Sandy River and was swept away by its strong current. Mother dove in but could not swim well enough to rescue him. Bonnie calculated the current would carry the flailing six-year-old past a gravel bar 300 feet downriver, which is where she sprinted. Then she jumped in the water and and dragged him ashore by his shirt.

The following morning, sensing that Don was still traumatized by the incident, Bonnie again came to the rescue. Out in the barn Grandpa sat on a three-legged milking stool as Bonnie and two barn cats took their customary milking-hour seats nearby. A squeeze of a teat sent a stream of milk arcing through the air, splattering whiskers and noses. Watching Bonnie lick milk was therapeutic for my brother. He laughed and cried simultaneously while hugging her. She had prevented his drowning the previous day; that morning she breathed life back into him.

In April 1962, cancer stole Bonnie’s life. When her symptoms worsened, a veterinarian arrived at the farmhouse one evening to administer euthanasia. The task completed, the vet refused payment. He did, however, reluctantly accept from my poor grandparents four Mason jars of raspberry jam, two jars of maple syrup, a dozen yeast rolls, a carton of fresh eggs, and a one-pound block of Grammy’s hand-churned butter.

Grandpa wrapped Bonnie in the tattered horsehair blanket she’d slept on since puppyhood and carried her to her favorite place on the farm, the apple orchard. Aided by moonlight, a pickaxe and shovel, he buried her beneath the frost line. That night he sat in the parlor dozing and periodically giving thanks to a grand companion who had protected his family and livestock from a marauding bear, a rabid fox, a barn fire, and the near drowning of a grandchild. Grammy, who sat with him for spells during that night, later told my mother that he should have also thanked Bonnie for listening to his weekly complaints about weather and stagnant milk prices.

The following day’s rain was fitting as my siblings and I decorated the gravesite with daffodils we’d collected on the southwest side of the farmhouse.

During supper, my heartbroken five-year-old sister Gale said little and ate nothing. As the table was cleared, she carried her plate behind the wood cook stove and dumped its contents into Bonnie’s bowl. “Since Bonnie will be going to heaven,” Gale announced, “she’ll need a full tummy.” Much to her delight, the bowl was empty in the morning.