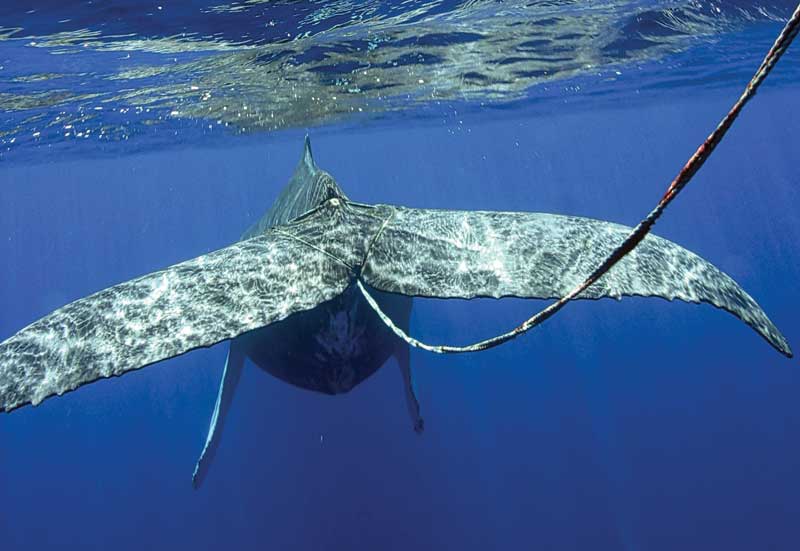 Shortly before noon on July 10, 2018, the Campobello Whale Rescue Team received an emergency call from the Canadian Coast Guard, alerting them to a distressed humpback whale calf wrapped in fishing rope. Team leader Mackie Greene, owner and captain of Island Cruises Whale Watch, canceled his scheduled day trips, met three crew members at Head Harbor, and boated 90 minutes across the Bay of Fundy to Nova Scotia’s Brier Island. When rescuers reached the entangled calf, it could barely lift its blowhole above the water to breathe.

The Campobello Whale Rescue Team, comprised primarily of fishermen, has been freeing entangled right whales and other cetaceans since 2002. Their efforts are more important now than ever, they say, as whales face a growing threat from entanglement.

A lean, convivial man with the energy of a teenager, Greene and his crew spent four hours working to free the 18-foot calf.

“We could have cut the rope from the whale within 15 minutes,” Greene said, “but its mother kept surfacing between us and the calf. Not wanting to anger her, we had to work slowly.” An irritated 45-foot, 36-ton humpback whale can easily capsize a small inflatable Zodiac. The calf, he added, swam toward the rescue team as if seeking help.

“The protective mother, though, instinctively nudged her baby away from us. Like humans, the bond between mother and offspring is very strong.” The whale eventually was freed by severing the rope with cutters on the end of telescoping poles. “Regulations prohibit us from entering the water to free an entangled whale,” said Greene. “And for good reason—it’s much too dangerous. Cutting ropes from whales can be dicey, even when you earn their trust.”

For Greene and others, watching the calf swim free was especially satisfying. Exactly one year earlier, Campobello rescue team co-founder and member Joe Howlett was killed cutting snow crab lines off an adult North Atlantic right whale east of Miscou Island in the Gulf of St. Lawrence. Standing in the Zodiac’s bow using a long pole with an attached knife, Howlett freed the six-year old, 70-ton whale with the second cut. “I got it, I got it,” Howlett yelled, giving a thumbs up. Then as the whale dove, its broad tail came out of the water and struck Howlett with a ton of force, killing him instantly. The 59-year-old, highly skilled, 15-year whale rescue veteran left behind a wife, two sons, and several grandchildren.

“We were thinking of Joe as the calf swam to its mother,” said Campobello whale rescue team member Robert Calder. “He was right there with us in spirit. You could feel it.”

“It was just a freak accident,” added Calder. “Joe would have wanted us to continue our important work. He knew that there’s no greater feeling than freeing an entangled whale. If we stopped whale rescues, Joe would haunt us as sure as I’m standing here.”

Throughout Canada and the United States whale conservation community, Howlett was hailed as a hero, especially on Campobello Island. Half of the island’s 850 residents attended his funeral; the close-knit global whale rescue community watched a live stream of the three-hour service on YouTube. Whale entanglements on the rise

Since 2003, the Campobello Whale Rescue Team has rescued several dozen whales. Team members voluntarily sacrifice a paycheck by skipping work to rescue whales. Their efforts are needed now more than ever as lobster and crab fishing industries thrive in the Gulf of Maine and the Gulf of St. Lawrence. More rope running from buoys on the surface to traps on the sea bottom increases the likelihood of entanglement of summering whales foraging on krill, sand eels, herring, capelin, and mackerel.

According to a National Oceanic and Atmospheric Administration Fisheries report, 76 large-whale entanglements were confirmed nationally in 2017, an increase in the 10-year annual average.

“Entanglements in fishing gear or marine debris represent a growing threat to the further recovery of these species,” the report stated. “Entanglements involving threatened or endangered species can have significant negative impacts to the population as a whole.”

Disentangling whales from lobster and crab ropes, though, remains a stubborn challenge. “The odds of successfully freeing an entangled right whale are about 50 percent,” said Greene. “They weigh 40 to 70 tons; freeing one is dangerous because they have incredible strength and stamina. On the other hand, our success rate freeing humpback whales is about 75 percent.”

Greene recalled many nights when he, Howlett, and the team returned to Head Harbor, Campobello “whooping it up” after successfully freeing a whale. “But there were many quiet trips home too,” he solemnly added, “when, after many hours of effort, a whale couldn’t be disentangled. That’s a horrible feeling.” 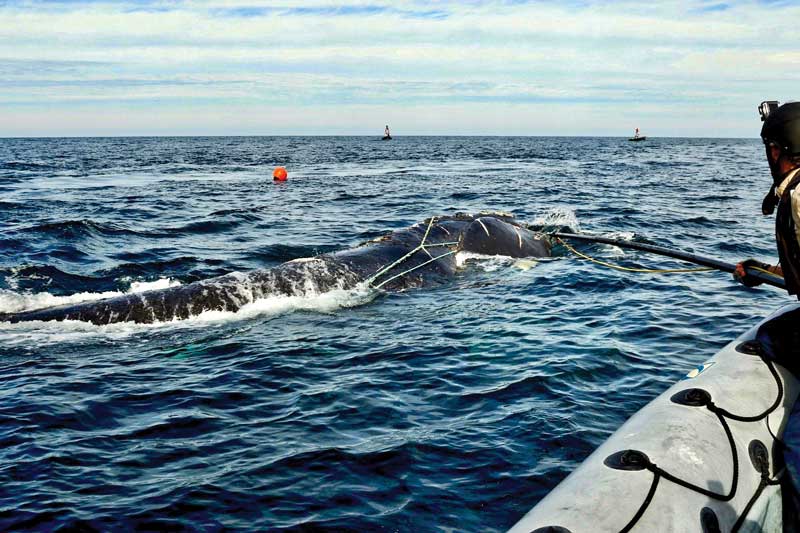 Atlantic coast state and federal government fisheries regulators, fishermen, and conservation groups have been debating steps to better protect whales through measures such as significantly reducing the number of lobster trap vertical lines and reducing the breaking strength of fishing rope. Unless mortality rates by fishing line entanglement and ship collisions are reduced significantly, the North Atlantic right whale is projected to become extinct in 20 years, scientists say. But as of this fall, there was broad disagreement about next steps.

The Campobello Rescue Team’s motto, “Fishermen helping fishermen save whales,” is being severely tested. “We’ve built trust with fishermen,” said Calder. “Fishermen are our eyes and ears on the water. We rely on them to report entangled whales. But that trust is tested when closures are ordered unnecessarily. Closures cost fishermen thousands of dollars in lost income. We all want to protect whales, including fishermen. But when fishing grounds are closed on supposition, we lose the trust of fishermen. And when fishermen stop reporting entangled whales, well, whales suffer needlessly.”

Greene, who grew up on Campobello, has fished for lobster since age 13.

“Fishermen get a bad rap, but we do care about marine resources. I try to be a good steward of the ocean,” he said. 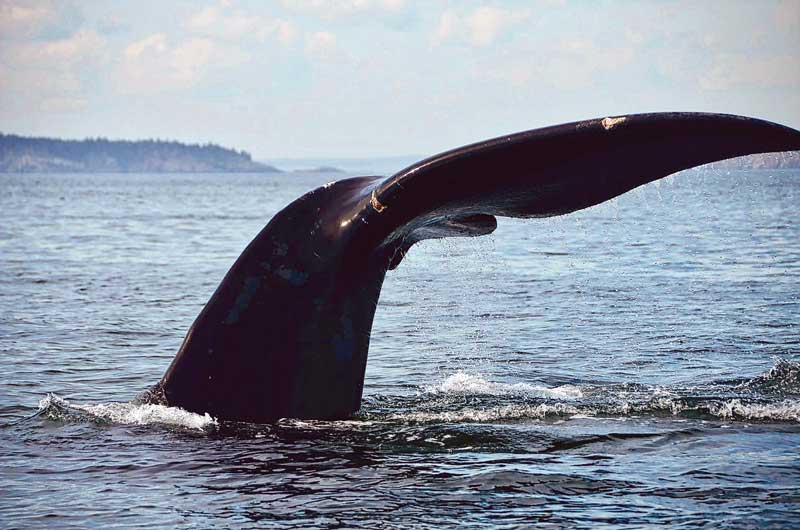 A Level 5 whale rescuer, Greene is certified in U.S. and Canadian waters. In 2004, in recognition of his exemplary work co-leading the Campobello Whale Rescue Team, Greene received the Animal Action Award from the International Fund for Animal Welfare.

“After watching whales and seeing what amazing creatures they are,” he said, “you can’t help but want to rescue ones that need help. You know that they’re suffering wrapped up in ropes and it makes you feel really bad so you’ve got to go out there and help them.”

His team has freed entangled whales throughout the Bay of Fundy, Prince Edward Island, Maine, Nova Scotia, and the mouth of Quebec’s St. Lawrence River.

“There’s no greater feeling than watching a freed whale swim away.”