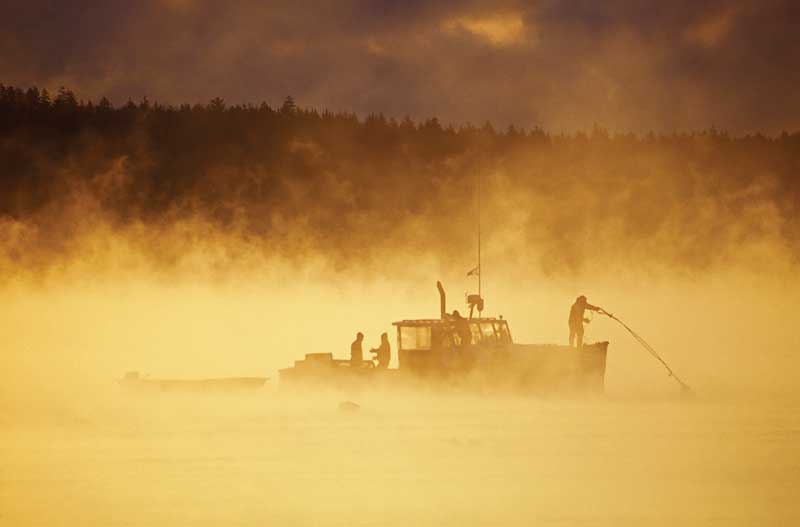 Dawn can make sea smoke look pretty, wistful even, but that’s actually deceiving. The rising winter sun that Joe Devenney has captured so deftly in this photo usually thins and then quickly chases away sea smoke. But when Arctic sea smoke first forms and settles in the wee, pre-dawn hours of a long January night, it is anything but attractive to those who must venture out on the water.

That point was driven home one morning when I joined the crew of a shrimping trawler out of Cundy’s Harbor a number of years ago. Sea smoke had settled heavily on the New Meadows River, obliterating any sense of the hefty boat moored somewhere just south of the wharf on which we gathered at around 4 a.m. “She’s over there,” our captain said confidently. “Let’s go.”

We clambered down a ladder to a waiting skiff, also invisible in the murk, and I learned my first lesson about sea smoke: It gets more dense the closer you get to the water. It can also make a skiff’s outboard impossible to start. Or maybe that was the sub-zero temperature. In any case, we picked up rime-covered oars and paddled a compass course across the tiny harbor until the side of the trawler loomed out of the dense mists.

The cause of sea smoke is the same phenomenon that makes your coffee “steam” on a May morning. Otherwise-invisible water evaporating from the liquid surface is condensed into “fog” by the colder surrounding air. This “steam fog” can happen anywhere and at any season as long as the evaporating water is significantly warmer than the air into which it evaporates.

In any case, in January in Maine, sea smoke makes a steel trawler very slippery. Special decking improved our footing; everything else was covered in tiny ice crystals. As we prepared to get under way, some of us even had rime condensing on our facial hair. Dawn couldn’t come soon enough.

Eventually, the southeastern sky lightened and we moved cautiously down the New Meadows River toward outer Casco Bay. Although the winds stayed calm, visibility began to improve and some of the sea smoke turned into “steam devils.”

The thinning sea smoke turned into long tendrils about 12 feet high and three feet or so in diameter. They rose above the denser mist like a platoon of phantoms and some even began to twirl, in a motion that meteorologists define as steam devils. Although the exact nature of their formation is complex, their simple beauty was exquisite.

Farther out in Casco Bay, a moderate breeze blew off the sea smoke, except for occasional wisps charging low across the water’s surface. Shrimping chores soon demanded my attention, but I will never forget this close encounter with Maine’s cold winter version of fog.