By Rob McCall
“Every leaf speaks bliss to me, fluttering from the autumn tree.” —Emily Bronte 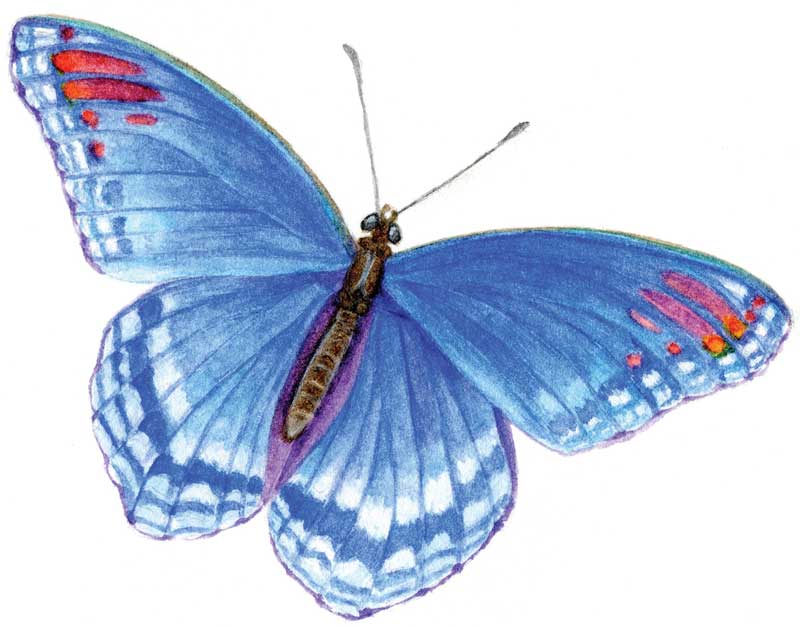 Among the joys of late summer are the moths and butterflies. Now, I am no expert on Lepidoptera but when I see so many of them, it pricks my curiosity. My first impulse is to look through my guidebooks to try to identify them, but nowadays it’s much quicker to go online. In the garden here at the Awanadjo Almanack Eggemoggin field station we have seen a number of monarchs, but also eastern tiger swallowtails, painted ladies, great spangled fritillaries, various blues and sulphurs, as well as sphinx moths and cabbage moths.

The problem for your commentator is that there are so doggoned many different varieties, and they never seem to look exactly like their pictures. So those cabbage moths might be white sulphurs, and those white admirals might actually be mourning cloaks, or yellow-banded grasshoppers. And, of course, that monarch might really be a large viceroy. Life is not so easily captured, nor pinned down. Even with the Internet and guidebooks, it’s hard to identify a vibrant, variable, living, breathing, bouncing butterfly from a pale picture taken somewhere else years ago. The white admiral and the red-spotted purple look so different from each other in their markings that they were long considered to be two different species. Only recently was it discovered that they are the same. A picture may be worth a thousand words, but it can also be almost as confusing.

Tomatoes and summer apples are becoming round, red, and ripe. Blueberries are for sale in the store and at countless mom and pop roadside stands. Yellow hawkweed is in bloom. Or are those late dandelions? Purple loosestrife appears along the roadsides. Or is that fireweed? Queen Anne’s lace is going by. Or is that valerian?

The annual autumnal ingathering is under way, whereby the yield of summer is brought in and stored for leaner times ahead. The last cutting of hay is baled and in the barn. Apple pickers work their way through the orchards on pointed ladders, bringing in the fruit. Kitchens are fragrant with the canning of jams, jellies, applesauce, pickles and those magical dilly beans that can heal any malady. Firewood is stacked in the woodshed and the prudent homeowner begins buttoning up the home. After a couple of hard frosts have killed the vines, pumpkins are carried from the garden, adding a splash of orange on the front stoop or around the mailbox out by the road.

Now and then the long, high, wavering V of migrating Canada geese can be seen in the sky, ushering in Autumn. Even their haunting call seems rusty red, like the leaves of the maples; like the backs of the migrating red-shouldered hawks circling by the cliffs of Awanadjo in silent concentration on the fields below. Overhead, ravens circle a thousand feet above the summit, then dive and dance in pairs. Next moment, the ravens plunge out of the clouds to attack the hawks floating below.

Ravens have an antipathy for hawks. Perhaps it is because ravens tend to stay in one place while hawks are great travelers in their fall and spring migrations. Perhaps the ravens view the hawks with suspicion and harass them as though they were gypsies or hoboes moving through town. By the way, the word “hawk” is borrowed from the vocabulary of the birds. Ravens were yelling HAWK! with great excitement, in between muttering under their breath, long before any humans developed the power of speech. Your backyard hens use the same word. When any large bird flies over, even a seagull, the hens scream HAWK! and run for cover.

With darkness coming earlier and staying later and the Full Hunter’s Moon just ahead, we have still dodged a hard frost here along the coast. Crickets chirp cheerfully, though a little more slowly. Grasshoppers cling to the screen door. Western conifer seed bugs—sometimes called “leaf-legged bugs”—hang around outside looking for a chance to come in where it’s warm. Woolly apple aphids float through the air like tiny snowflakes, showing that even the smallest creatures migrate; in this case, from their summer places on apple trees to winter lodgings on American elms. A woolly bear caterpillar munches contently on the geraniums we brought indoors before a recent chilly night. He/she will be ushered outdoors later to spend the winter under some leaf litter, there to freeze solid, then to pupate in spring, and then to emerge as a tiger moth. But for now, Woolly makes a fine pet.

Apple picking proceeds, with late fall and early winter varieties coming ripe these days. People ask, “How can you tell when the apples are ripe?” There are many clues for when it is time to pick, but first you must pick one. If it comes off easily with a twist and doesn’t take any leaves with it and sounds like “Tock-tock” not “Tick-tick” when you tap it with your finger, and if the seeds are dark and loose when you cut into it, and if (this is the big one) if it tastes sweet and not starchy when you bite into it; then it’s ripe. There is a test that commercial operators use called the Brix test which uses an optical refractometer to test the sugar content of the juice. But your taste buds are just as good and that form of testing is way more pleasant. 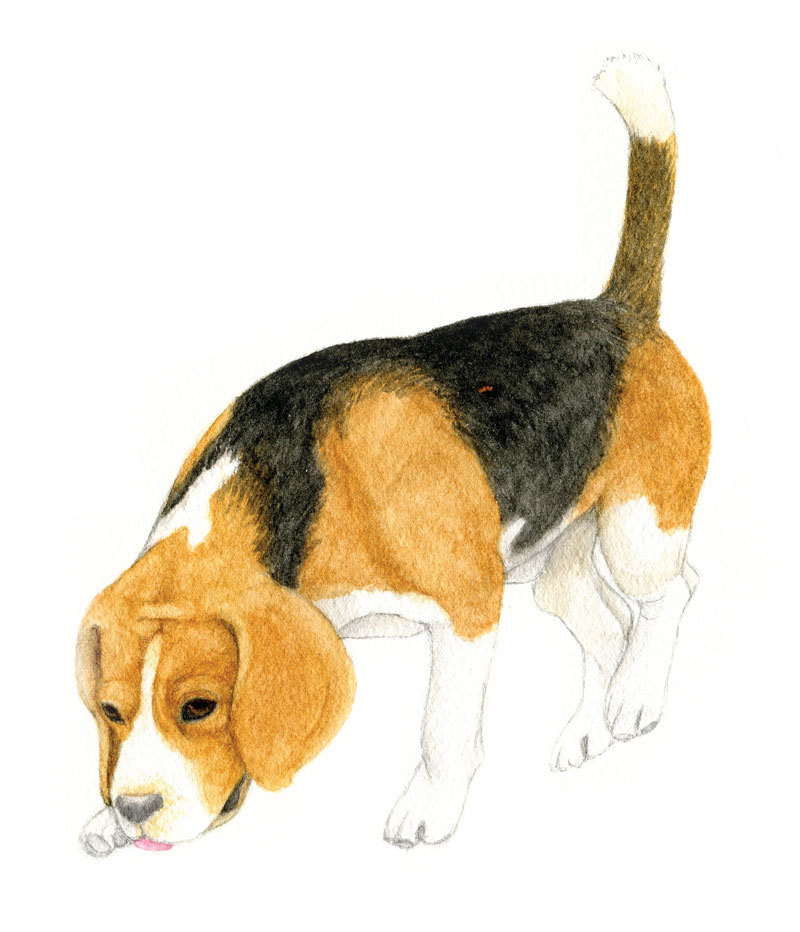 Being among the largest of animals (the average creature is closer to the size of a fly), our senses are too gross to notice most of the ordinary sensory events on earth. We depend more on manipulation and thinking for our survival than we do on our senses. A dog’s sense of smell is much more acute than ours, and the sense of smell of an ant is several times that of a dog. The keen eyesight of the hawk, eagle, and other predators is legendary, as is the hearing of the rabbit, bat, and others.

In short, despite our vaunted intelligence and cleverness, we are unable to experience, and so are totally ignorant, of most of what is going on around us. Our cameras, microphones, microscopes, and other instruments give us little clues and snatches, moments in time, stopped action; the two or three loudest notes in a “continuous harmony,” but hardly a hint of the whole symphony. After all, a snapshot of the Tower of London and a recording of the sound of Big Ben don’t make one an expert on the affairs of state of Great Britain. All this going on that we can’t hear, see, taste, or smell is like learning about a great party and not being invited. It’s enough to make you feel left out.

But never mind that. Imagination comes before knowledge and fills the gaps. Leonardo da Vinci imagined the helicopter and the parachute hundreds of years before they were developed. Neils Bohr dreamed the structure of the atom before it was ever seen. If someone can imagine the secret sounds and smells, the unknowable sights, tastes, and touches, then knowing them intimately becomes possible.

So, imagine the tiny scraping sound of an ant pulling its antennae through the cleaning hooks on its front legs, and the sensation the ant feels while cleaning these highly sensitive appendages. Imagine the clicking of a cricket’s feet on a stone wall and the rustle of its wings as it scrambles between two stones… The sound of a mole sneezing… the minute sliding and scraping of an earthworm working its way through the loam. Imagine the smell of a rabbit’s breath, or a hawk’s, or the odor of the queen’s chamber of a large and busy ant-hill. Imagine the taste of buffalo or beaver milk; the sound of an aphid sucking a juicy leaf; the feel of a butterfly’s wings unfolding as it emerges from the chrysalis; or the sound of sap flowing up and down the tree in tiny rivers.

Now imagine something unlike anything you have experienced in memory, but have experienced many times in reality: imagine the sight, sound, smell, taste, and feeling of a cell wall stretching, and the dividing of its chromosomes and protoplasm as a single cell splits into two new living, moving, shimmering cells.

Now, finally, imagine the sound of someone saying that there is no mystery to life.

From Edwin Way Teale (1899-1980): “On such October days as this, we look about us as though in some new and magic land. The mystical draws close behind the luminous veil. We see the things about us and sense larger meanings just beyond our grasp.  Looking back on such a time, we add—as Thoreau did one autumn day—‘And something more I saw which cannot easily be described.’”

Rob McCall splits his time between Moose Island and Brooklin, Maine. This almanack is excerpted from his radio show on WERU FM, streamed on weru.org.