Which of our Maine coastal islands has so enraptured a talented artist that he published a book featuring only paintings of that island? That would be Chatto Island in Eggemoggin Reach. This approximately 12-acre island is the star of Island: Paintings by Tom Curry (Down East Books, 2012). Brooklin’s Curry is just one of many people for whom Chatto is a special place, even if it’s not grand by the standards of more spectacular Maine islands.

This island at the entrance to Center Harbor provides sanctuary to an unusually fine fleet of mostly sailboats, many designed by Herreshoff and many built by Brooklin Boat Yard. It also is an easy rowing destination, a place for nature exploration, and a memorable picnic and swimming spot. Chatto features granite shores and gravel beaches, a spruce-fir forest interspersed with a few hardwoods, nesting for ospreys, ravens, and some songbirds, and a perimeter trail bordered in many places by lush mosses and lichens.

Those ospreys have commanded the island (and the harbor) for years, being omnipresent and frequently loud from mid-spring until late September. When the young are practicing flying, as many as five of the big raptors often are seen over the harbor at the same time. One year the nesting tree, directly across from Brooklin Boat Yard, toppled in a winter gale; the following summer there was a new nest in the very next tall spruce. The ravens, also often noisy with their raspy squawks, have chosen the island’s opposite end for nesting.

Wildlife in the water but close to shore included four otters that once surrounded my kayak off Chatto’s western end. Circumnavigating the island, whether in a kayak or rowboat or on a stand-up paddleboard, is a popular trip for many, enhanced by the creatures in the air, trees, and water. 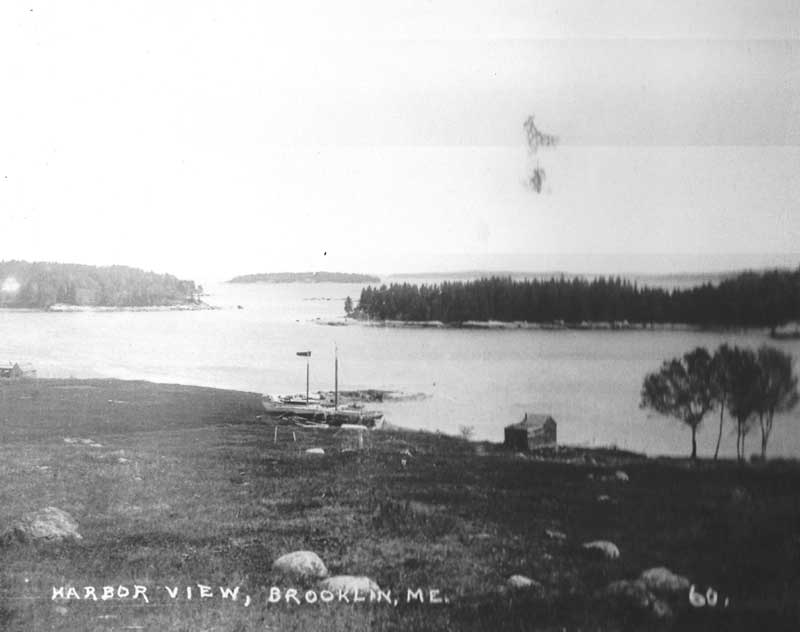 This old postcard shows a quieter Chatto Island. Such an empty harbor is now only seen in winter. Photo courtesy Ben Emory

A trip across the harbor to Chatto holds special appeal to young explorers. I’ve enjoyed seeing groups from the local elementary school on spring field trips to the island. Some years ago two grandsons, then ages 4 and 5, begged to go; the older had just finished a week at a nature camp where he had learned that interesting life can be found under rocks. On one of Chatto’s beaches this older boy turned over rocks and showed the finds to his interested younger cousin. Then I heard, “Boomer (my grandfather name), can you help us?” They pointed to a huge boulder that no one without a bulldozer was ever going to budge.

The name Chatto was given to the island by George Chatto, who bought it during the Civil War, according to Maine island historian the late Charles McLane.  Previously, the island had been known as Smith Island. In his Islands of the Mid-Maine Coast (The Kennebec River Press, 1982) McLane wrote that the island was used for harvesting firewood, grazing sheep, and picking berries. 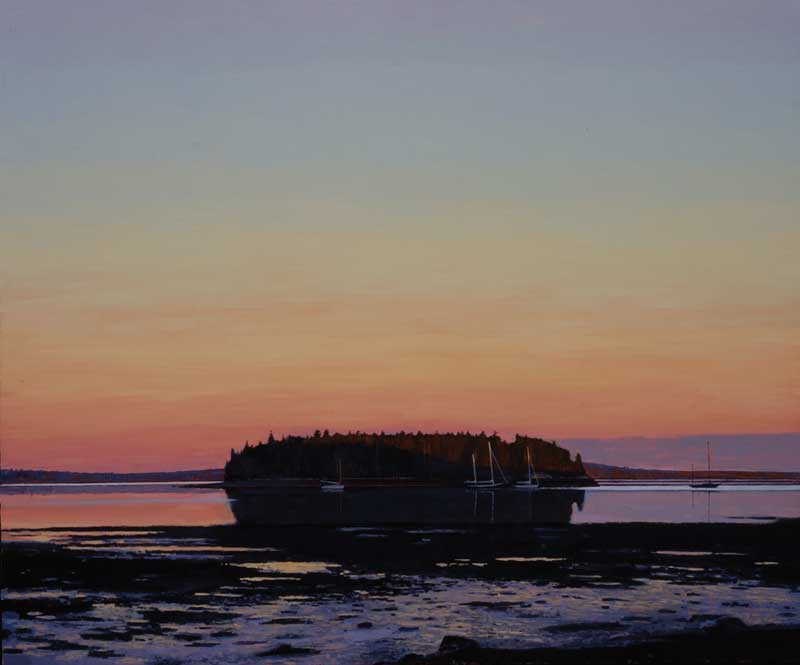 Tom Curry’s book Island, featuring essays and his Chatto paintings, has recently been reprinted. The paintings show the island in many different lights and seasons. Many portray it as a single land mass surrounded by sea and sky. This painting, which shows the island in its actual setting, is called Dawn. Image courtesy Tom Curry

No evidence exists that the island ever had a building on it, and that undeveloped character will continue. Chatto is protected by one of the earliest conservation easements preserving a Maine island—it was granted in 1972 to Acadia National Park with the assistance of Maine Coast Heritage Trust. Donated by my parents, German and Katherine Emory, the then owners, the conservation easement prohibits any development or commercial activity.  Annually, Acadia National Park’s land resource specialist—for some years now Emily Seger Pagan—visits the island to be sure that the restrictions in the conservation easement are being observed. Her ride to Chatto and other islands subject to the national park’s conservation easements is provided by a Maine Island Trail Association boat and driver.

The conservation easement does not provide for public access, although many later conservation easements on other properties throughout Maine do.  Public access to Chatto remains at the discretion of the landowner. But our family members, who still own the island, take great pleasure in seeing so many elements of the community enjoy Chatto—residents, both year-round and summer, and crews of visiting cruising boats. Problems such as occasional trash and fires above high tide have been so rare that we have not needed to detract from the sense of wildness by posting signs of guidance for visitors. As people enjoy the recreational delights, I hope they benefit from immersion in the natural setting and find deepened commitment within themselves to protecting nature.

After Mr. Chatto, the island seems to have passed through several owners before it came into our family. In 1898, a brochure advertised the island for sale under the name “Castle View,” calling it “one of the prettiest islands on the whole coast of Maine, [containing] beautiful groves and moss-covered ledges overlooking the sea”—evidence that hyperbole in the selling of real estate is not new.

By the 1930s the island belonged to Will and Fanny Sholes. According to family lore, Will Sholes approached my grandfather, Ben Riegel, noting that the Sholeses were childless but the Riegels had a daughter, son-in-law, and grandchildren. The island, said Sholes, should belong to and be loved by someone with descendants. Reportedly, the sale price in 1938 was $200.

This not-grand island is a family and community treasure. In the introduction to Curry’s book of Chatto Island paintings, nature writer Terry Tempest Williams notes, “Curry’s gift to us is always the return, the return to the island.” Returning to Chatto, again and again and whether visually or by oar or paddle, is indeed a gift, for all of us.

Ben Emory splits his time between Salisbury Cove and Brooklin, Maine. His book Sailor for the Wild—On Maine, Conservation and Boats was recently published by Seapoint Books.

A Tale of Two Boatyards