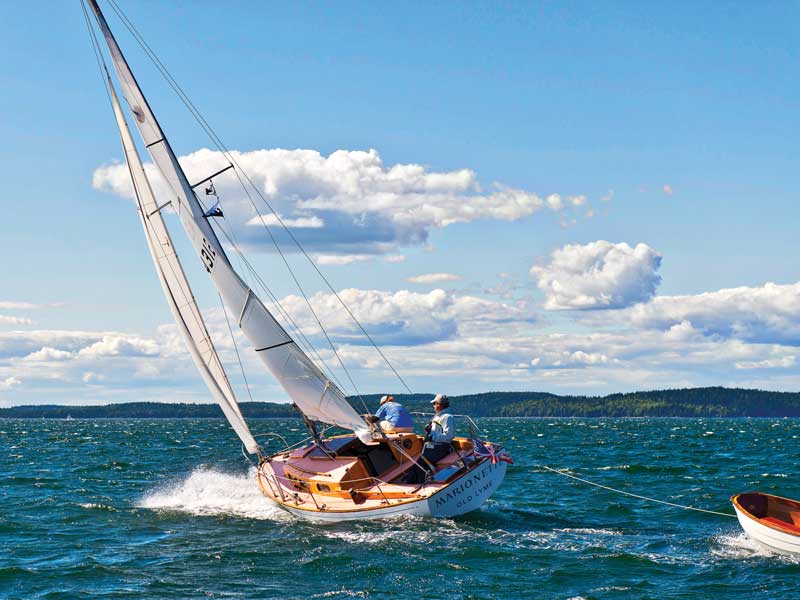 Marionette shows off her rough weather sailing skills on a blustery day in Eggemoggin Reach. Naval architect Olin Stephens once wrote that he considered the Dolphin 24 one of Sparkman & Stephens’s best designs. Photo by Benjamin Mendlowitz

“I have just had a phone conversation with George O’Day, who is very anxious to get going on two new boats to be built of Fiberglass, which he would like to have built according to our designs. The smaller boat he has in mind would be a Junior Ocean Racer.”

This December 8, 1958 quote from naval architect Olin Stephens, in a memo to his staff, begins the story of the Dolphin 24. I call it the Dolphin 24 Birth Certificate. I found it as a tissue carbon copy in the back of the Dolphin 24 technical file at the Sparkman & Stephens offices on 5th Avenue in New York.

My Dolphin, Marionette, whose home port is Niantic Bay Yacht Club in Niantic, Connecticut, is Hull #12. Her hull was built in 1960 by Marscot Plastics in Fall River, Massachusetts, for George O’Day and Associates, Inc. Her particular hybrid construction typifies the period. A guy with good hands and know-how, but no boatbuilding experience, bought a bare fiberglass hull and used a borrowed trailer to truck her to his backyard in Southport, Connecticut. There, under a tarp, he built a quality wood boat on that hull over the next several months. 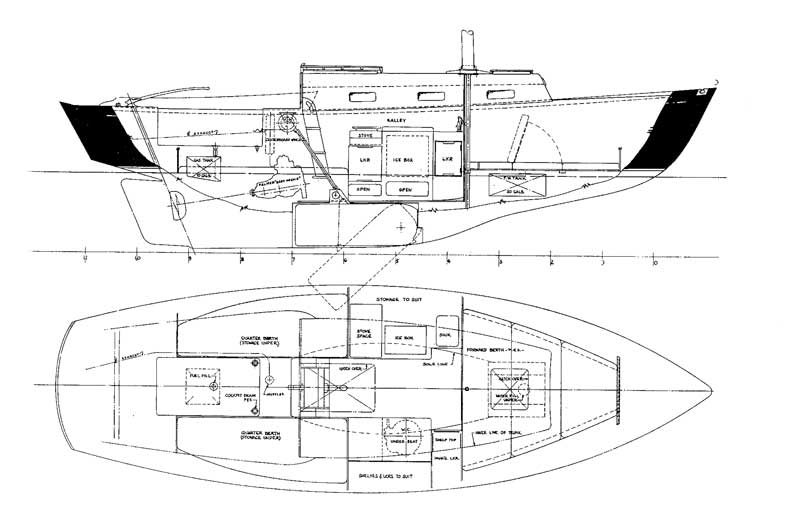 The Dolphin 24 was designed by Bill Shaw, then a project engineer at Sparkman & Stephens, using the long keel/centerboard design evolution that the S&S-designed Finisterre made famous. The design followed the rules of the Midget Ocean Racing Club which then called for a maximum overall length of 24'. Coupled with the lower production cost experienced in the transition-to-fiberglass period, this gave racing skippers of modest means not only their own rule under which their smaller boats could race, but also a safe boat in which to take their families out to the islands off the New England coast.

The Dolphin 24 fit the bill perfectly, and after nearly 60 years these boats can still win races. Marionette’s trophy case includes wins in the 2008 Off Soundings Club Spring Series out to and around Block Island, and she had the best corrected time in the entire 132-boat fleet in the Around Block Island Race. She won again in 2010, 2012, and 2015. She has won the S&S Association Global Challenge Trophy for the best performance by an S&S designed yacht three times. And, she has raced in all four Camden Classic Cup regattas, 2016-2019, twice winning her class.

A big part of my life with Marionette was the decision to start a website about the Dolphin 24 (dolphin24.org). I wanted to describe and—with the help of others—find out more about how Dolphins played their small but important role in the days of the sailboat design transition from wood to fiberglass. 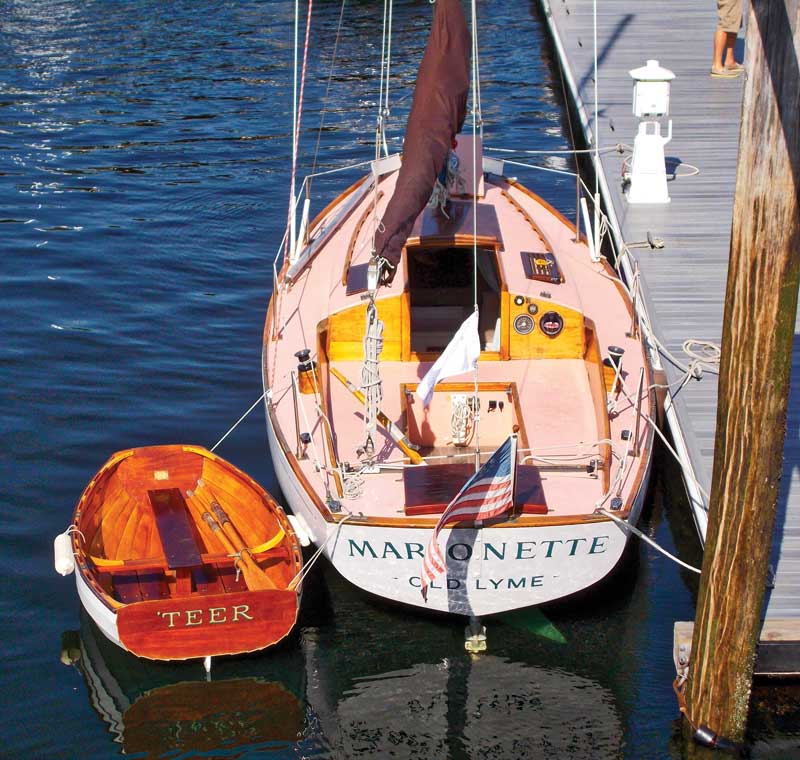 Marionette and her dinghy 'TEER tied up at the Lyman-Morse Docks in Camden, Maine. This photo is on the cover of Voyaging with Marionette (Whaler Books 2020), a book by Ron Breault about his boat and the Dolphin 24 class. Photo by Ron Breault

Marionette came into my life in 1995 when I bought her for $3,000 from the Connecticut River Museum in Essex, Connecticut, where she had been donated for a fundraising auction after spending 10 years on the hard. Her first owner, the guy who built her lovely wooden cabin, deck, cockpit, and interior, named her Teal. She was sold in 1966, to a member of the Essex Yacht Club who renamed her Dubhe, and after racing her for a few years he sold her to two friends who later sold her to a carpenter at Essex Boat Works. He renamed her Marionette and raced her for 12 years or so before selling her to a friend who ended up leaving her on the hard for 10 years. Then, I found her.

Dolphins move around in pods so Marionette wanted to have other Dolphins join with her on the website, and share their experiences describing how they got their new lives. To help get this project off the ground, on February 6, 2007, I interviewed Olin Stephens (98 years young at the time!) at his home in Hanover, New Hampshire. I later spent hours going through Sparkman & Stephens’s old Dolphin 24 files in New York City. Unfortunately, many files had been destroyed years before in an errant mission to streamline their filing system. Among the various internal correspondence I found a quote that will warm any Dolphin owner’s heart. This from the man who, at 21, founded the leading marine architectural firm of the last century: Olin Stephens to James (Sham) Hunt, Sales Manager, O’Day Corporation, May 12, 1965: “We have always thought of the Dolphin as one of our best designs.”

Marionette and I have spent much of our 25 years together cruising the New England coast singlehanded, with a particular focus on getting to Maine. Sailing up Buzzards Bay, through the Cape Cod Canal, across Massachusetts Bay to Gloucester/Cape Ann, and up the Maine coast is a demanding challenge.

Singlehanded sailing is special, but I have to confess my best sail ever was with son Mike, leaving Cape Ann at dawn, bound for Portland where he had to catch a flight back to New York the next morning. We had a favorable breeze, set our spinnaker, and sailed through the Isles of Shoals with whales breaching alongside and dolphins arcing in our bow wave.

We made such good time that we sailed past Portland into Casco Bay looking for a marina with a restaurant where we could eat and from which Mike could catch an early morning taxi to the Portland airport. Mission accomplished! We arrived at Potts Harbor, South Harpswell, and tied up at the dock of the aptly named Dolphin Marina and Restaurant at 7:30 p.m., had a great dinner at the restaurant there, and agreed that it was the best sail ever.

Marionette and I have had many adventures in Maine—at Bucks Harbor on Eggemoggin Reach, Center Harbor in Brooklin, Blue Hill, Mount Desert, Spruce Head Island, and other places along the coast. My recent book, Voyaging with Marionette, chronicles 25 years of such adventures together. The cover photo, taken in Camden, Maine, shows the wooden dinghy I built myself, but that’s another story for another time.

Ron Breault is a member of the Niantic Bay Yacht Club, Off Soundings Club, Eastern Connecticut Sailing Association, and is webmaster of the Dolphin 24 Class site at dolphin24.org.