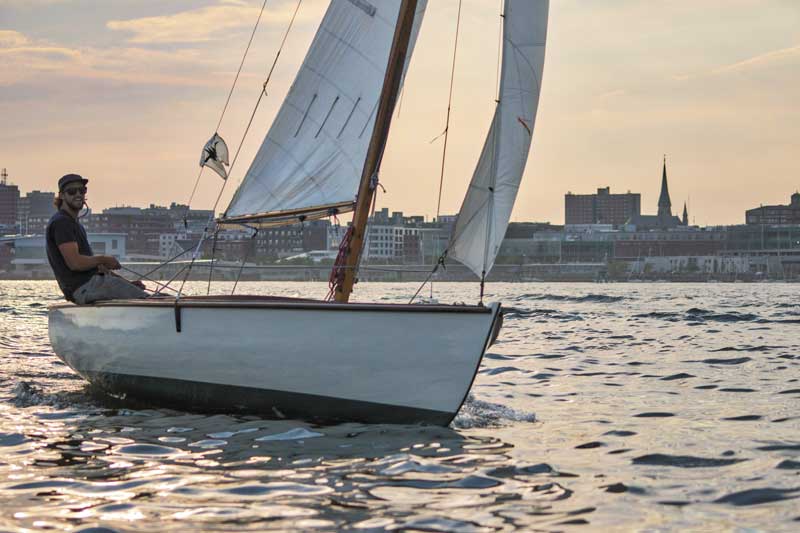 Beneath the rust-red iron structure of the Casco Bay Bridge, the Fore River channels itself into a frenzy as it drains to low tide. When the currents and a stiff southwest breeze consolidate their power, navigating through the bridge in an 18-foot wooden sailboat becomes a task of mighty dedication. Approximately 60 feet separate the two massive bumpers on either side: about three boat lengths for Aletheia, my recently restored 1938 Rhodes 18—not much room to tack upwind while battling a conveyor belt of tide and breeze on the nose.

Despite being well aware of these twice-daily conditions, I found myself fighting this battle quite often last year. I keep Aletheia on the dock at Portland Yacht Services, where I work as a marine carpenter, and to return to my slip, I must sail back up the river, under the bridge, through eddies and whirlpools—and almost always against the weather. 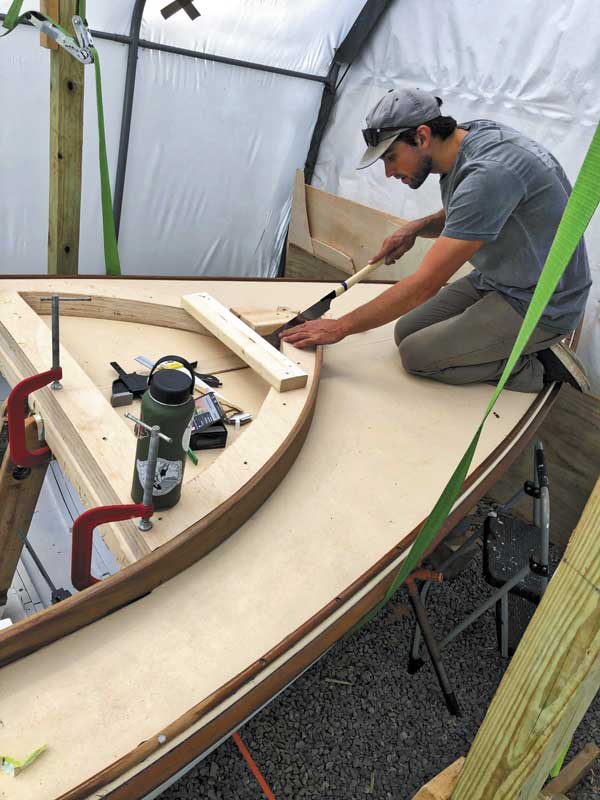 Theriault installed custom coamings he designed and built in order to more effectively keep water out of the cockpit. Photo courtesy Sawyer Theriault When I do make it through, Aletheia’s 26' rig bends and she bursts back into action. It’s a feeling every sailor knows—when the sails snap full again, and she heels to the wind. The bridge is a short but fierce passage in a small sailboat, but after a years-long restoration project riddled with setbacks, and a few moments of despair, it seems a fitting way to return to the dock.

Five years ago, when I first bought Aletheia, I knew almost nothing of wooden boatbuilding. I had spent the early winter of 2016 engrossed by Herbert and Doris Smith’s Sailing Three Oceans, and became dead set on restoring a wooden boat of my own. I fell in love with the classic designs of Nathanael Herreshoff, Phillip Rhodes, and Olin Stephens, and finally found my boat tucked away among other abandoned projects through a Craigslist ad that read, “1960 Wooden Rhodes 19.” It declared she was “in need of some love,” and the only photo was of a wooden hull that vaguely resembled the Rhodes 19s I knew. So, on a hot September afternoon I drove with my dad, a marine surveyor, to Southport Island Marine, and found exactly what I was looking for: a sound wooden hull ready to be brought back to life.

After getting her home I was increasingly puzzled by the missing cuddy cabin typical to the Rhodes 19. I posted some photos and questions online, and in short order discovered that this was not a Rhodes 19 at all, but its predecessor, the Rhodes 18. As Cape Cod Shipbuilding had stopped building the 18s out of wood soon after World War II, this hull was most likely from the 1930s. With this discovery, I got to work, starting with Bud McIntosh’s How to Build a Wooden Boat, followed by a thorough pilfering of my dad’s extensive library of boatbuilding books and the construction of a bow shed to work in.

I thought my first project would be caulking the seams, so I built a pair of wooden gantries, put her in slings, and enlisted some friends to flip the hull over. Months earlier I had discovered a trove of boatbuilding tools in my parents’ basement; they were from my great uncle, a caulker at Hodgdon Yachts in the 1930s and 1940s. The old mallet and irons—along with chisels, a bit brace, and some broken hand planes—were still in serviceable condition. With much more motivation than experience, I began pounding cotton into the seams.

Within the first hour I noticed some discoloration in the keel timber. While prying at it with a flathead screwdriver I found to my dismay that the screwdriver sank through the wood like it was a block of cheese. After some more investigation and destruction of the surrounding areas, my real first project dawned on me: I would need to replace the keel. My eagerness began to evaporate with the realization of the true scope of the project. Replacing the main structural timber of the boat was not in the realm of my comprehension or skills at that point. I put my tools down, turned the lights off, and mulled over my options. There were three: ignore it; scrap the boat and salvage some money by selling the trailer; or buckle down, find an expert, and do it right. 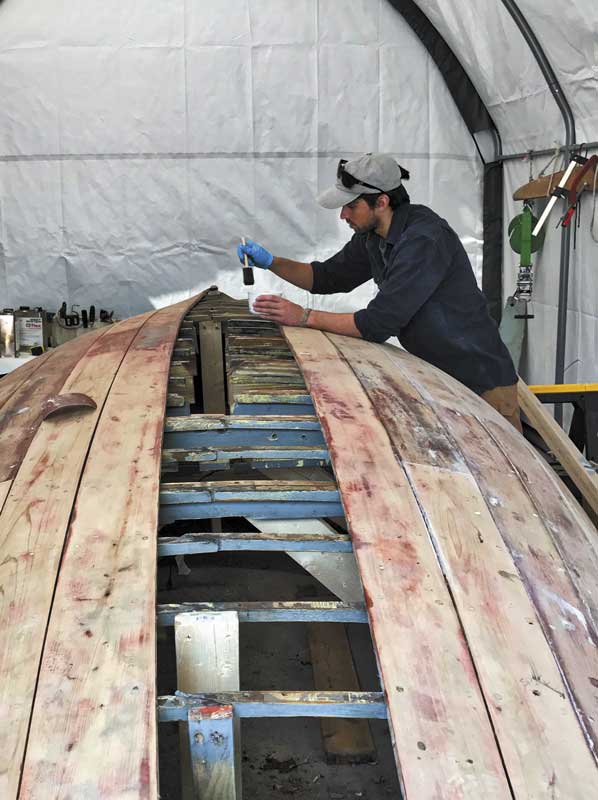 The keel, centerboard trunk, and garboard planks were the main structural members that needed replacing. Photo courtesy Sawyer Theriault After a few days of lamenting this first setback, I called the WoodenBoat School to ask for recommendations for a boatbuilder in the Portland area. I was directed to a shipwright named Rob Blood, and when I called Rob and told him that I didn’t have much budget but that I was willing to learn, he didn’t hesitate: he’d be by tomorrow to take a look. The following day, sometime in mid-January, he arrived wearing a wool sweater and a hat covered in recently milled white oak.

Rob and I soon got to work installing temporary bracing to support the hull. As he pulled keel bolts, I removed the garboard planks and battered him with questions: What’s the best way to remove bungs? What happens when the fastener head is filled with epoxy? Will we really be able to make the new keel and planks tight?

By mid-February we’d removed more planks than I had anticipated, and again my doubts about the project crept in. Later that month, though, we laminated in a new iroko keel—the first new construction to be installed on the 80-year-old hull. This kept my doubts at bay just long enough to move on to the next step. I continued on, calling Rob weekly with a list of questions that he never hesitated to help me answer.

I was now truly committed to completing this project, but I gave up on the idea of trying to launch the boat that summer… or the next, for that matter.

Over the next three and a half years I spent every minute I could out in my boat shed. I rebuilt the centerboard trunk, replaced floor timbers, and laid fresh Dynel over the decks; I redesigned and built new coamings to resemble something closer to a Herreshoff 12½, and built new toe rails and rub rails to match. In the summer of 2020, nearly four years after the first interrupted attempt, I finally began caulking the hull. 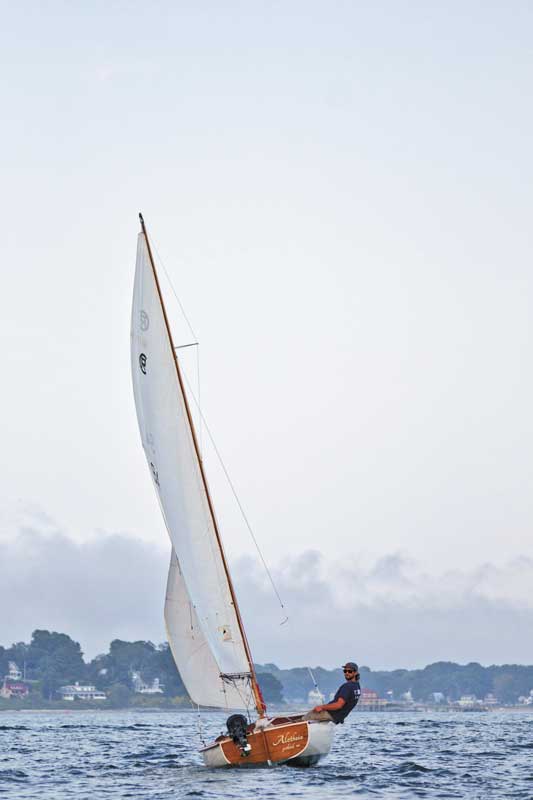 Theriault, shown here sailing Aletheia, has already started his next boat project: restoring a 1967 Hinckley Pilot 35. Photo by Dustin Turin As I began to install hardware and apply final coats of paint and varnish late in the summer, I could feel the anticipation of launch day growing. Finally, nearly four years to the day from when I’d brought her home from Southport Island, Aletheia saw water.

She slid down the ramp and floated away from the trailer, sitting perfectly on her lines. The water reflected and glistened from the off-white hull and the sunlight sank deep into the mirror-finish varnish. She truly was a thing of beauty, yet I couldn’t relax to enjoy the moment fully: I was busy checking how quickly she was taking up, fretting over whether the centerboard system I’d rigged up would actually lift the 150-pound piece of iron, and worrying over every other thing a sailor worries over. After a few hours of pacing the dock, I reluctantly left her for the night. I walked home with my anxieties barely constrained.

Later that night, sometime after 9 o’clock, I walked back down to check on Aletheia, hoping she was not at the bottom of the ocean. When I arrived at the dock she was just as I’d left her and the water in the bilge hadn’t risen. For the first time I actually got into the boat and sat down. Putting my feet up on the seat across the cockpit and leaning back against the coamings that had taken me nearly a full summer to build, I took a deep breath and smiled. An overwhelming sense of fulfillment washed over me—after four years, Alethia was ready to sail. Here she was, floating alongside the dock, a testament to willpower I had previously been unaware of, one that was rooted in the most obvious of foundations: I simply loved the work.

Now each time I point Aletheia toward the confused water under the bridge, wind and tide forcing me to tack incessantly to make it through the brief, relentless pass, I grin: I know in a few moments, we’ll slip beyond the eddies and her sails will fill.

Sawyer Theriault is a marine carpenter who grew up in Cape Elizabeth, and currently works and lives in Portland. In addition to working full time in a boatyard, Sawyer’s current personal project is restoring his 1967 Hinckley Pilot 35. You can follow his progress on Instagram @sawyertheriault.