How the Propeller Turns at Nautilus Marine 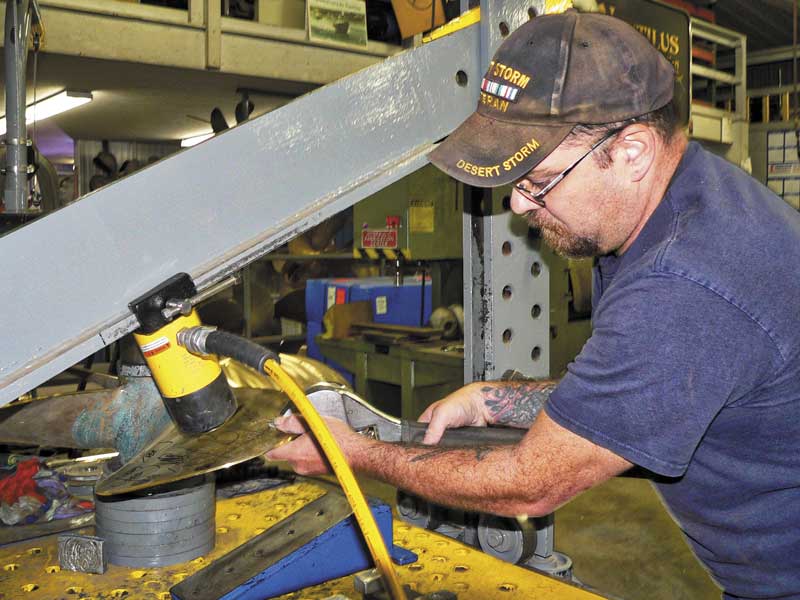 Bringing a propeller to true dimensions from blade to blade is a mix of precise computer technology, an artist’s touch, and, sometimes, brute force.

The company name is Nautilus Marine Fabrication, Inc. But this story isn’t about their custom metal fabrication—from rugged trap racks for lobster boats to mirror-finish bow rails for yachts—or the amazing work they do with their CNC waterjet.

This story is about propellers.

And while propellers are only a portion of what Nautilus does, it’s a significant portion when it comes to what’s going on at any given moment.

During a recent visit with manager Mark Dickinson and co-owners Jim Patten and Steve Brenton, there were numerous calls requesting propeller sizings; fishermen (and fishermen’s wives) dropped off propellers to be repaired and/or reconditioned; new props were picked up for boats that were in the home stretch of completion; and repaired props went out the door to be refitted onto waiting shafts (one to make that afternoon’s tide).

There were three-blade, four-blade, and five-blade propellers—either manganese bronze or NiBrAl (a blend of nickel, bronze, and aluminum).

There were props for pleasure boats, props for work boats, and one radical-looking three-blader that will be pushing a contender in the upcoming lobsterboat racing season.

Things were hopping... but it was just an average morning at Nautilus Marine.

The original company, known as Nautilus Marine Engineering, was founded by two out-of-state craftsmen, Winston Ellis and Ned Simmons, who joined forces in 1983. When fresh-out-of-trade school Mark Dickinson was hired later that year, he was blown away by the caliber of work produced by the shop, which was located in West Tremont, Maine, at the time.

“I remember looking at one of the anchor rollers they’d done for one of the yacht builders on Mount Desert,” Dickinson said. “It was like looking at jewelry—just beautiful work.”

Along with a wide array of custom fabrication, Nautilus developed its own line of bronze underwater hardware (propellers wouldn’t come into the picture for a few more years) and built up its team. Two of the hires over the years were Steve Brenton in 1986, who had a background in auto mechanics, and Jim Patten, an experienced metal fabricator who signed on in 1991.

Dickinson, Brenton, and Patten’s paths diverged for a time in the 1990s: when Nautilus decided to sell its underwater hardware division in 1994, Dickinson bought it, going out on his own as Waterline Marine.

In the meantime, Patten and Brenton teamed up to buy out the original Nautilus partners in 1998. They changed the name to Nautilus Marine Fabrication, and moved the operation to its current location in Trenton a year later.

By 2002 the business—primarily fabrication work for production yacht builders and custom one-off projects for fishing boats—had grown enough to warrant a full-time shop manager. Re-enter Mark Dickinson, who now had some experience with propellers and drivelines to add to the mix. This served as the catalyst for Nautilus’s decision to become a full-fledged propeller shop by 2004.

You don’t get to be a prop shop simply by saying you are one, of course. You have to invest in training and the tools you need to do the work. “The first Hale MRI (a computerized 3D propeller measurement device) we bought cost almost as much as we paid when we purchased the business in 1998,” Brenton said. You need to build relationships with customers as well as distributors (so you can purchase stock at competitive prices). And you need to simply put your time in and pay your dues.

As Nautilus’s in-house propeller guru, Dickinson learned how to strike a balance between running the computer sizing programs and seasoning his input data with seat-of-the-pants info regarding various boat hulls and engines.

“I’ve been so fortunate to get to know people who are good at what they do and willing to share their knowledge,” he said, crediting the numerous boatbuilders and engine suppliers he’s worked with over the years.

“As I got more and more into doing sizings, I learned you needed to fool the program,” he said. “Maine lobsterboats are a different animal. The average sizing program tends to underestimate the speed of the boat… and overestimate what the prop should be. That’s where it helps to know what factors to use when you’re entering the information. Talking to people and gathering real-world performance numbers is key to that.”

“Mark keeps records on everything,” said Patten. “The boats and engines have changed a lot over the years and he stays on top of it all.”

Nautilus offers propellers manufactured by ZF, ACME, and Michigan Propeller (they’ve been named a “Top Ten Distributor” by Michigan). The varying product lines gives them choices when matching propellers to a given hull/engine combination in a particular application. And by keeping up with updates in propeller repair and customization technology, they’ve been able to meet the increased demands for performance in both the commercial and pleasure boat markets.

“It’s funny,” said Dickinson. “High-performance pleasure boats have taught us things that we can apply to high-performance lobsterboats, and vice versa.”

“In the end, everyone wants the same thing: all the speed and efficiency they can get.” 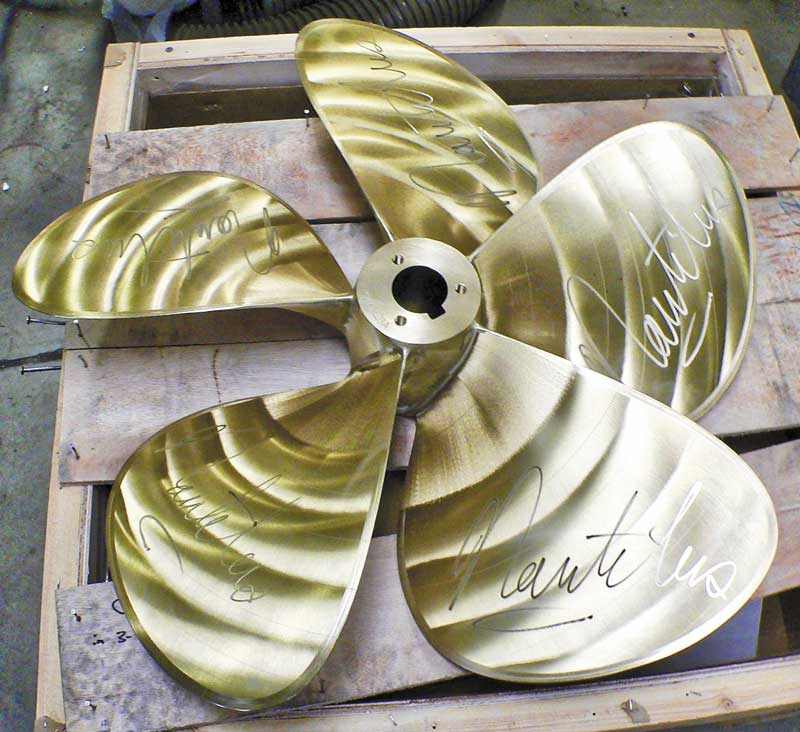 A Michigan N-500 5-bladed propeller, ready to go on a shaft. “Five blades are unbeatable as far as smoothness goes,” said Mark Dickinson.

Pick a propeller, any propeller. Just for something to talk about,

That first number, the 26, is the diameter of the prop. The second number is the pitch: the distance the propeller would move forward in one full revolution, and, in a perfect world, the hull it was driving would as well, if there were no slippage. (Average slip for semi-displacement hulls runs in the 15-20 percent range.)

A four-blade is considered a nice all-around propeller (see separate sidebar), but there are instances where a three- or five-blade is just what the prop doctor ordered.

And then there are all the different blade styles out there, and the fact that you can have two propellers with the same diameter x pitch dimensions, which will achieve different RPM (and overall performance, depending on the hull/engine combination) because one has more blade area than the other. (Two 26" props both dig the same size hole... but the one with more blade area fills more of that 26" hole.)

How do you choose the right propeller for your boat?

How many blades do I need, anyway? 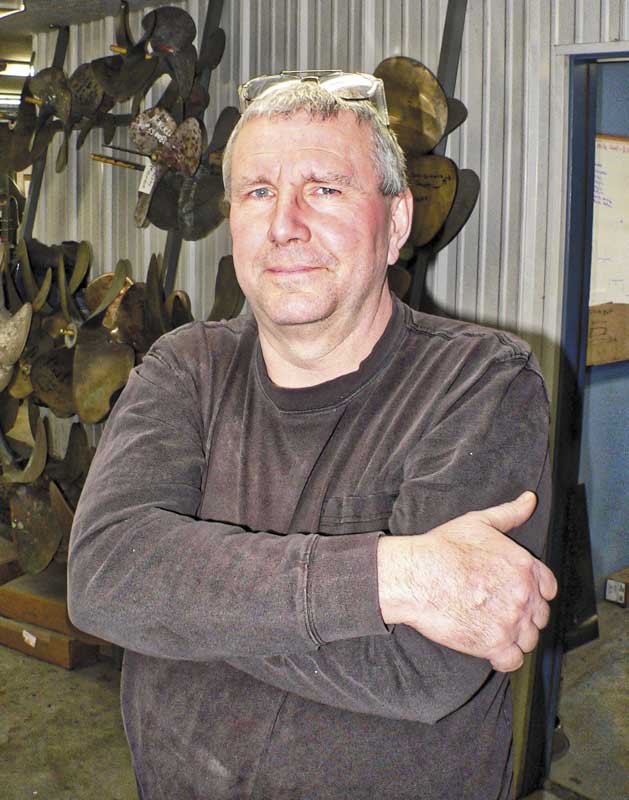 Here’s a quick primer on the basic differences among three-, four-, and five-blade propellers, in the words of Mark Dickinson (shown at left).

A three-blade prop is a good choice for a relatively lightweight hull. Something that’s slippery and easy-pushing—and the higher the shaft RPM, the better.

The thing about a three-blade is it wants to be tuned as well as it can possibly be by the prop shop, as it will always send more noise up through the boat than a four- or five-blade. If it’s tuned super-duper, the noise can be very minimal, but it has to be spot-on.

With all of that being said, because there’s less rotational resistance with a three-blade—they don’t weigh as much; there’s less metal; there’s not as much blade area to rotate through the water—it generally means you can have an inch (if not more) of pitch compared to a similar design/same diameter four-blade. And that, if you haven’t increased your slippage rate, means you’re going to go faster at the same RPM.

If you’re looking for the absolute wide-open speed out of that easy-going boat, you’re probably going to get it with a three-blade propeller.

On the other hand, a four-blade is a great compromise.  And the fact is, especially with a lot of the bigger lobster boat-style hulls, there’s not a lot of performance difference as far as wide-open speed between a three and a four.

What you are going to gain is the fact that a four-blade is going to be smoother than a three—as long as they’re both tuned to the same level of perfection.

On top of that, a four-blade is likely to give you better handling—better turning and backing down—because it has more blade area... and that gets the power to the water more efficiently at lower RPM when you’re maneuvering.

When we first started using five-blade props, it was all about the smoothness. If tuned to the same standards as a three- or four-blade, a five is unbeatable as far as smoothness.

As far as speed goes, it depends on the boat. The lighter boat with high shaft RPM that likes a three-blade might not see anywhere near as good wide-open performance with a 5.

But take a big boat with big power and a deeper gear ratio—which means slower shaft RPM, and a five-blade is going to be way more efficient and provide better performance. Again, it’s a matter of wanting the bigger blade area that five blades provide to get the power to the water.

We tell customers all the time: top speed’s all well and good... but when are you going to use it? Your cruise is what you really want to pay attention to. 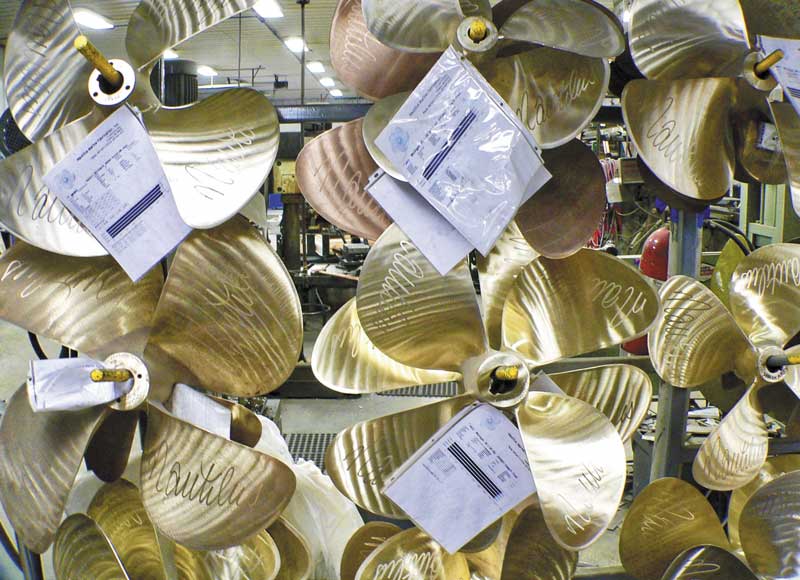 A rack of finished props, looking way too pretty to go back to work.