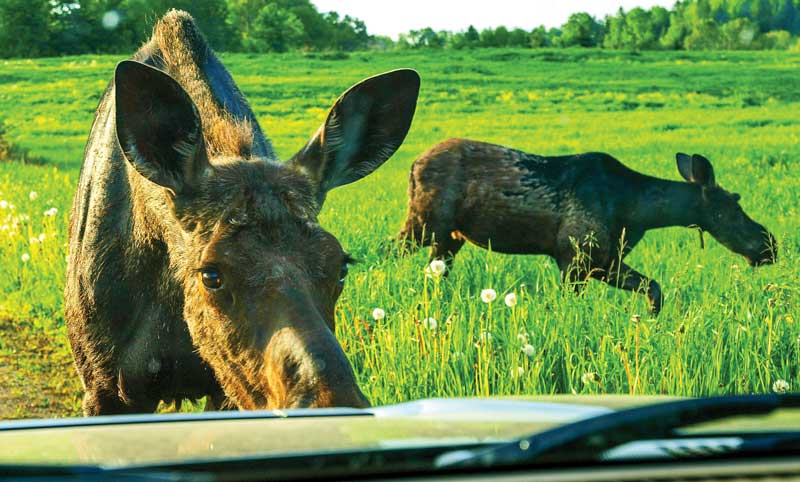 Having been a wildlife biologist for more than four decades, I’m often asked if a wild animal has ever threatened or attacked me. The short answer: Yes, discounting a rabid red fox I shot at close range. In addition to once being startled by a desert tarantula riding shotgun in my vehicle in southern Utah and, another time, a rattlesnake crawling out from beneath my tent on the Pony Express National Historic Trail in Utah, here’s a list of my most memorable uncomfortable wildlife encounters.

Moose: Bull moose are large (a state record Maine moose weighed 1,330 pounds field dressed, meaning its live weight would have been approximately 1,800 pounds) and unpredictable during the breeding season. Busy courting and mating with multiple cow moose from mid-September until mid-October, alpha males routinely battle other testosterone-charged bulls. I’ve had several tense run-ins with ornery moose during the rut. Once, while hunting grouse near my home south of Greenville, a bull moose chased me up a wild apple tree and held me hostage for an hour before he lost interest, but not before he systematically destroyed numerous speckled alders with his large antlers. Fortunately, my empty shotgun at the base of the tree was not destroyed.

Years later, when I imitated the call of an estrous cow moose for a photographer friend, a bull moose snuck up behind us, blocking our path to the safety of my pickup. Discovering that I was not a cow sent the bull into a rage. He chased us into a four-foot diameter culvert, where we hid for 30 minutes in ankle-deep water before sprinting the several hundred feet to my truck.

But as frightening as bulls can be during the rut, their behavior pales in comparison to cow moose with calves. In June 1991 while I was conducting a breeding bird survey west of Clayton Lake, a cow moose appeared on a logging road in front of me. When her newborn calf emerged from the forest behind me, the cow lowered her ears and charged me. Knowing I couldn’t outrun the moose to my vehicle, I scrambled up a nearby logging operation slash pile. She tried reaching me, but her long legs became entangled in the tree limbs. Cow moose with calves, I’m convinced, are the most dangerous animal in the Maine woods. Rearing up on hind legs like an angry horse, cow moose have killed predators and maimed humans by throwing themselves forward with sharp front hooves. 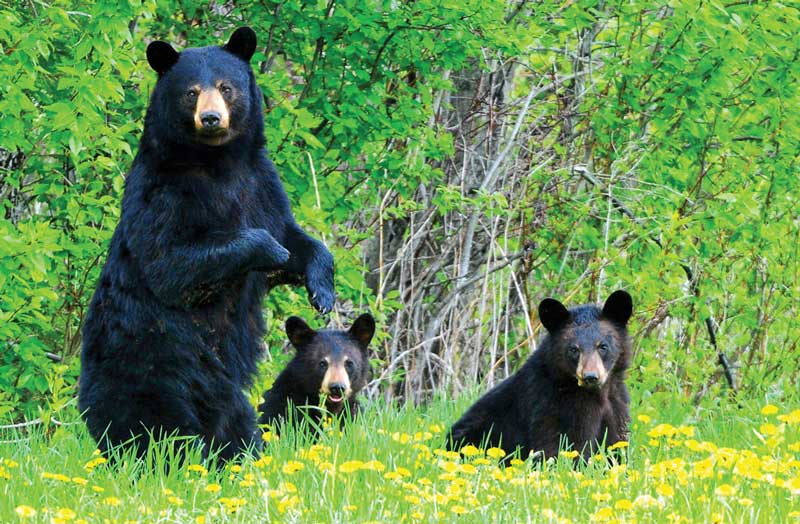 Bears: During the spruce budworm epidemic of 1978, I worked as part of a wildlife research team assessing the impacts on birds of Double Sevin, a highly toxic insecticide being sprayed from fixed-wing aircraft in the Allagash Wilderness Waterway region. One rainy day, my supervisor, Frank Gramlich, and I were walking along a tote road near our cabin on Round Pond when his rambunctious English Springer Spaniel sprinted up the trail in front of us. Minutes later she came racing back with her tail between her legs.

“She must have seen a moose,” Gramlich said. We continued walking. Minutes later three bear cubs bawled loudly 10 feet above us in a hemlock tree. Without a word, we began retreating but were quickly stopped by a charging mother bear. Each time we moved, she charged to within several harrowing feet, snapped her jaws, and retreated. Gramlich’s dog scratched my legs, begging to be picked up. The bear wheeled and proceeded to run circles around us, so fast we could barely keep her in sight. She repeatedly stood on her hind legs, teeth bared, to make herself appear large and formidable. Finally, one by one, her cubs dropped out of the tree like falling apples and raced to join their mother. Safely reunited with her cubs, she went one way; we went the other.

We knew that black bears rarely attacked humans, but we wouldn’t have put it past this one for those unsettling few minutes.

In Alaska’s Denali National Park in September 1979, the hair on the back of my head stood erect during an inadvertent encounter with a sow grizzly bear and three cubs. Lucky for me, though, the wind was blowing in my face, which meant the bears couldn’t smell me. About 200 feet from me, they were busily eating late season blueberries. A steady snowfall was also a blessing, softening my retreating footsteps over a knoll on the tundra. The previous evening, a park ranger had informed me that earlier in the week a sow and three cubs had walked through my Toklat River Valley campsite. Rangers routinely ask campers to move to another campground when grizzly bear tracks are found. But he didn’t advise me to move, reasoning that the bears had likely crossed the river.

Golden Eagles: Generally, golden eagles leave their nests when humans intrude. Once, though, while I was banding eaglets in Utah’s Spanish Fork Canyon in 1979, an adult female aggressively tried to deter me from banding her unfledged young in a Volkswagen Beetle-size stick nest atop a cliff. She strafed me several times and presented her talons once. Divebombing a third time, she lightened her load by dropping the prey she had been carrying. Kent Keller, my field partner, remarked, “I’ve got my eyes on the prey. It just landed in sagebrush several hundred feet below us. Let’s remember to inspect it.” We quickly banded both eaglets with numbered aluminum bands issued by the National Bird Banding Lab in Maryland. The eaglets’ parents were exceptional hunters—the nest was littered with carcasses of jackrabbits, a bull snake, and a lamb.

Descending the mountain slope with our rappelling gear, we paused to search for the jettisoned eaglet food. “Check this out, Ron,” Kent yelled, standing next to sagebrush, “the eagle dropped a blue grouse.” Its feathers plucked; the grouse was still warm. Kent and I shared the same thought: with excess food in the eyrie, we opted to roast the grouse for dinner at our camping site in a cottonwood stand farther up the canyon. It was a delicious gift from an eagle.

(Postscript: In 1998, I received a card from the bird-banding lab. One of the Spanish Fork eaglets I had banded had been found dead from electrocution in southern Utah. She had lived nineteen years—a ripe old age for an eagle.) 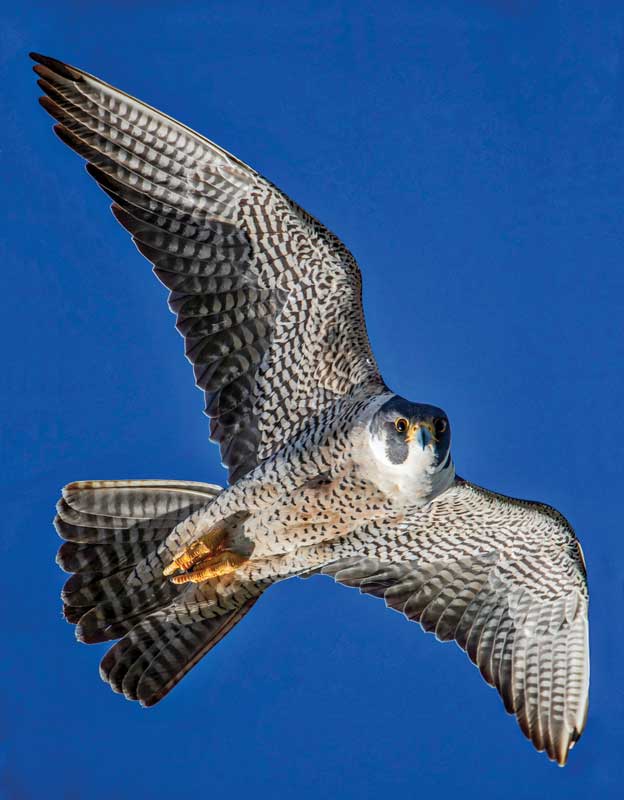 Peregrine Falcons: Unlike eagles, peregrine falcons aggressively attack humans near their nest sites. I’ve banded peregrine chicks and collected prey remains many times from eyries and have always been strafed by the adults. In May 1980 I flew with Dr. Jim Enderson of Colorado College to Bryce Canyon and Zion National Parks to retrieve falcon eggs. Months earlier the Peregrine Falcon Recovery Team had advised the Park Service that, due to the cumulative effects of DDT, the shells of peregrine eggs were too thin to survive hatching in the wild. The team recommended that eggs be collected and incubated in a controlled environment until they hatched, at which point the young could be returned to their nest. Rappelling over a ledge to collect eggs from one cliffside nest in Bryce Canyon, I was not surprised to be immediately buzzed by a female peregrine. The closer I got to the eyrie, the closer she buzzed me. Her loud, piercing “yak-yak” calls were painful at close range. I knew from experience that when her calls stopped, the falcon would zero in for a fast strike. While I was concentrating on gently placing the thin-shelled eggs in a padded portable incubator, the falcon—flying in excess of 60 mph—raked the back of my neck with her sharp talons, just below my climbing helmet. Focused on leaving artificial eggs in her nest so she wouldn’t desert it, I was unaware of my injury until I reached the top of the cliff. With blood soaking the back of my shirt, the Park Service escorted me to their first aid station where an employee disinfected the cut and applied a gauze bandage. Thirty days later, wearing a shirt with an upturned neck collar held snug with a bandanna tied around my neck, I returned her young—hatched at the Peregrine Fund’s breeding facility at Fort Collins—to the Bryce Canyon eyrie, along with a half dozen dead Bobwhite Quail to help her and her mate feed their nestlings.

Letter from the Publisher - Issue 98