Bringing the Tidely-Idley to Life 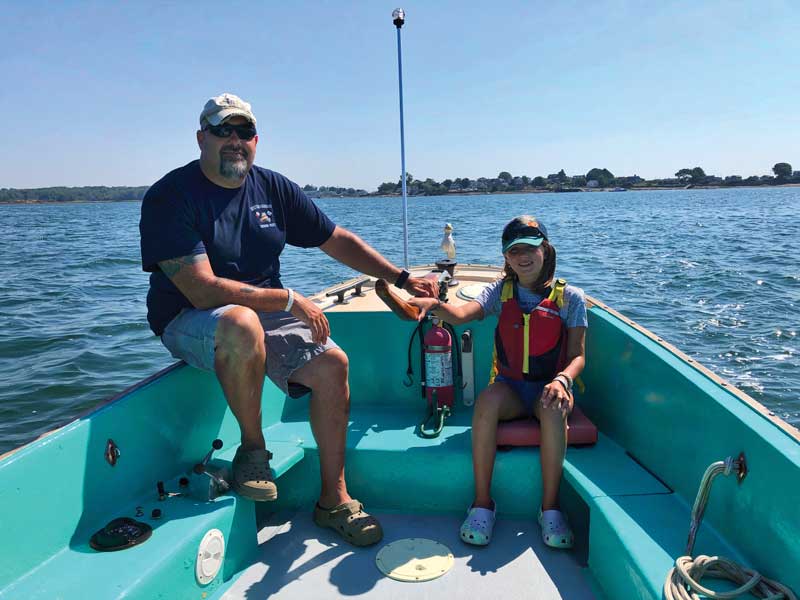 Sam Coolidge’s 26-foot multi-colored boat is turning heads in Casco Bay. You’d turn your head, too, if you were a fan of children’s book author Robert McCloskey and happened to see the distinctive Tidely-Idley puttering through the ocean waters.

Coolidge took a vintage double-ended Coast Guard motor surf boat and, with the help of his 9-year-old daughter, Hazel, transformed it into a spitting image of the old fishing dory made famous in McCloskey’s classic Burt Dow, Deep-Water Man. He now keeps the vessel in Harpswell during the summer, and in Portland in the spring and fall.

Coolidge was raised on the writings and illustrations of Robert McCloskey, whose award-winning books included Make Way for Ducklings, One Morning in Maine, Time of Wonder, and Blueberries for Sal. McCloskey and his family spent summers at their island home in East Penobscot Bay, and he died in 2003 in Deer Isle. 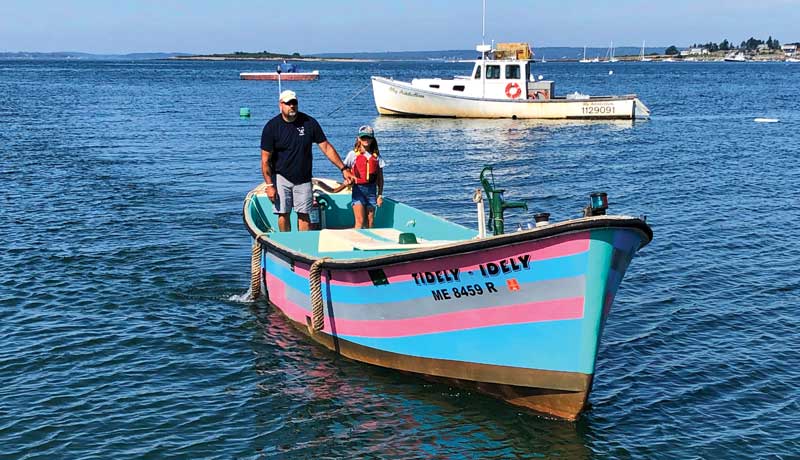 Sam Coolidge and his daughter, Hazel, spend many summer days simply moseying about in their boat, sometimes packing dinner for sunset cruises.

But of all of McCloskey’s books, it was “Burt Dow” that most influenced Coolidge and planted the seed in his imagination to build a replica—or as close to a facsimile as he could—of Dow’s rickety leaky fishing boat Tidely-Idley. Coolidge’s vessel doesn’t go “clackety-BANG! clackety-BANG!” when he turns over the engine, or require constant “slish-cashlosh, slish-cashlosh” pumping out like the boat in the book, yet it has the feel and look of a bygone era.

Coolidge thinks McCloskey would be proud of his boat if he were alive today. He took apart and reassembled the boat in the spirit of Burt Dow, with used parts, things that were on hand, and a “little Maine ingenuity.”

“I would hope that he would see that his influence, his books, his legacy and his artwork had quite an effect on me and my family and inspired this boat,” Coolidge said while cruising at six knots in the waters off South Harpswell. “Without Burt Dow, Deep-Water Man, I may have been interested in a boat like this, but it may have turned into something more ‘yachty,’ for lack of a better term. New boats are nice, but an old boat has a soul and a story to tell if you’re willing to listen to it.” 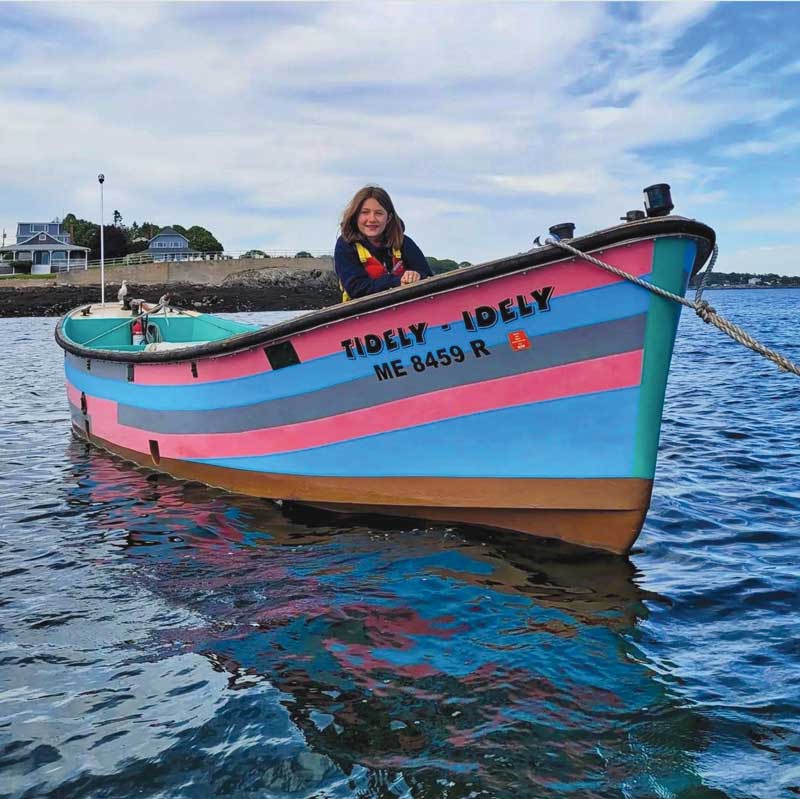 Like her father, Hazel loves being on the water. She could tie a bowline before she could tie her shoes. Photo by Sam Coolidge

Coolidge, 43, works as a tugboat captain in New York Harbor when he isn’t in Maine, either at his home in Scarborough or a camp in Harpswell that’s been in his family since the 1930s. The thought of building a replica of the Tidely-Idley had bounced around in his head since he was a kid, and he put his idea into action a few years ago when he saw an old 26-foot Coast Guard boat listed for sale by a private owner on Mount Desert Island. When Coolidge and his young daughter, Hazel, drove up to take a look, they discovered the boat was full of sludge, leaves, pine needles, sediment, and a few small trees that had taken root. The boat hadn’t been used for 26 years.

Despite his doubts, Coolidge ended up plunking down $750 for the boat. “I got that sinking feeling in my stomach: ‘What am I doing?!’” 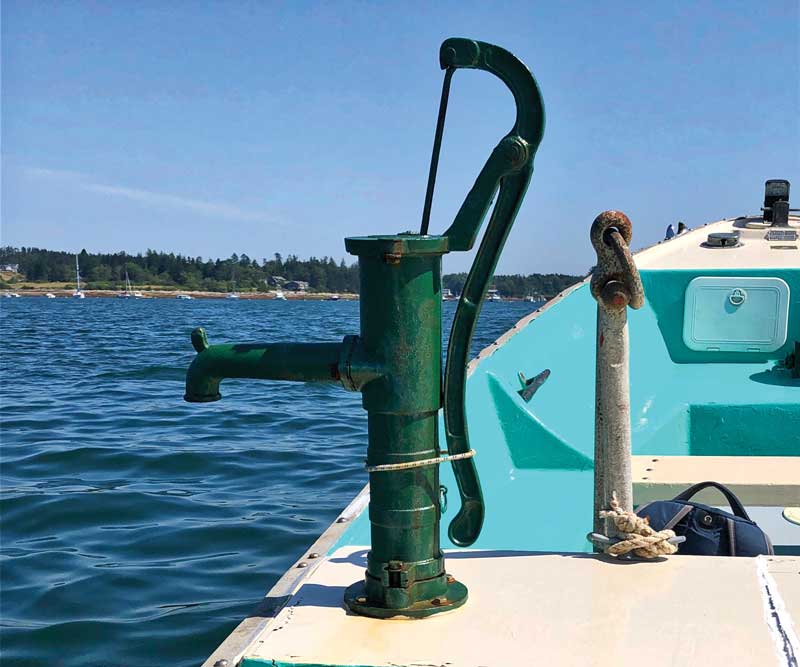 To get a water pump to match the one in the book, Coolidge googled “old water pump” and located this one on Amazon. He would rather have found one locally at an antiques shop, but he had to work within a tight time frame and tight budget.

With the deal done, he and Hazel drove the vessel home to Scarborough on a rickety trailer, shoehorned it into his garage, and began what would turn into a year-long overhaul. With Hazel by his side much of the time, they cleaned, altered, and refurbished the boat, using a picture of the Tidley-Idley taped to the garage wall as a guide. They removed mud from the fuel system, cut off part of the console, replaced the floor decking, and refurbished the 110-hp Hercules D-3000 engine. They swapped out the steering wheel with a wooden tiller, added an old water pump (just like the boat in the book), and attached a wooden seagull to the stern to represent the giggling gull (“Tee-he-he-hee!”) that accompanies Burt Dow when he’s out fishing in the book.

They painted the side planks and the interior to match the Tidely-Idley, removed 2,300 pounds of soaking wet foam from the bulkheads, and added some finishing touches until, finally, they launched the boat on May 27, 2021. The Tidely-Idley was reborn.

McCloskey’s book is based on a famous fisherman from Deer Isle named “Bert” Dow, who was friends with McCloskey and whose gravestone says he lived from 1882-1964. In the book, published in 1963, Dow whimsically ends up in the belly of a whale while out fishing for cod. Using his ingenuity and a little spare paint that’s in his boat, Dow gets the whale to emit a whale of a burp and eject him, his boat, and his giggling gull out of its tummy and back into the ocean.

When Coolidge and Hazel cruise the waters of Casco Bay or stop in at various marinas, the Tidely-Idley draws a lot of double takes and recognition from other boaters, sparking conversations about McCloskey, Burt Dow, and the enduring spirit of the Maine commercial fisherman. “Sometimes when I pull into a marina, I’ll hear, ‘Hey, Burt!’” Coolidge said.

Inspired by their boat, Coolidge and Hazel have taken to writing a children’s book of their own about what happens to Burt Dow and the Tidley-Idley once they get back to land, picking up where Burt Dow, Deep-Water Man ends. Coolidge said he also contacted one of McCloskey’s daughters, Jane, about the boat; she responded by sending him 20 copies, which he has given out to fellow boaters.

“I think Burt Dow and my father would both be happy to see a new incarnation of the Tidely-Idley tooling the waters of the Maine coast,” Jane McCloskey said in an email. “There are surely more beautiful boats out there, but none so distinctive!” 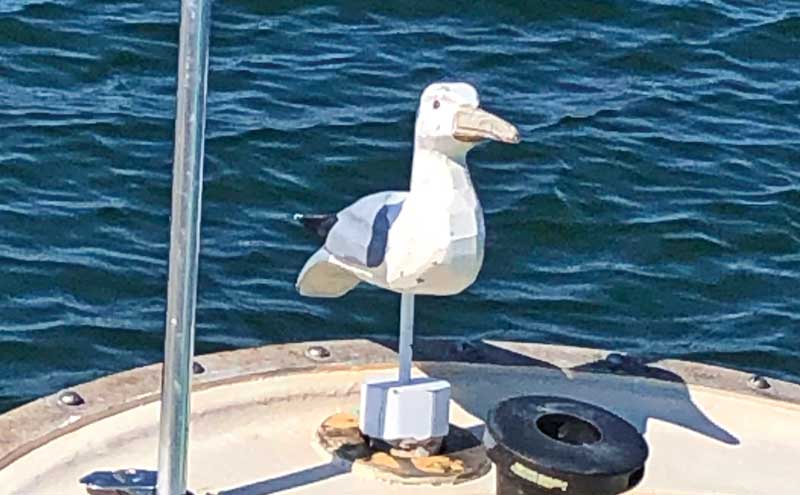 In the book, Giggling Gull is Burt’s constant companion. The wooden version of the gull is Hazel’s favorite part of the boat, along with the tiller.

For now, Coolidge is glad to keep Robert McCloskey’s spirit alive, in much the same way other tributes and landmarks have done for his other books. “Make Way for Ducklings” bronze statues are on display in Boston Public Garden and in Moscow, Russia, and a “Sal’s Bear” statue can be found at the Coastal Maine Botanical Gardens in Boothbay. The sailboat that was portrayed in the 1957 book Time of Wonder was donated several years ago to the Deer Isle-Stonington Historical Society, where it was refurbished and put on display.

With a beaming Hazel by his side, Coolidge is content slowly cruising in his version of the Tidely-Idley and keeping alive the messages in McCloskey’s books.

“Robert McCloskey’s works are truly timeless. His stories that I read as a kid are still relevant today,” he said. “My daughter enjoys those stories the exact same way I did. Doing things like this pay homage to Robert McCloskey and the enduring spirit of the Maine commercial fishermen. These are things worth bringing to the forefront as reminders of what we had and what’s still relevant today.”

Clarke Canfield is a longtime journalist and author who has written and edited for newspapers, magazines, and The Associated Press. He lives in South Portland with his wife.