In a first, simulator generates both wind and waves to test structural strength against ocean forces

Ships, oil rigs, offshore wind turbines, bridges, sea walls: whether on the high seas or close to home, they are all subjected to elemental forces. They exist in an environment that tests human ingenuity on the calmest day as well as during nature’s battering fury.

The dilemma is how to test designs for these structures ahead of time. A new, multi-million-dollar facility at the University of Maine’s Advanced Structures and Composites Center in Orono, Maine, is a part of the solution. Its founders say it is the world’s first combined wind-and-wave simulator. 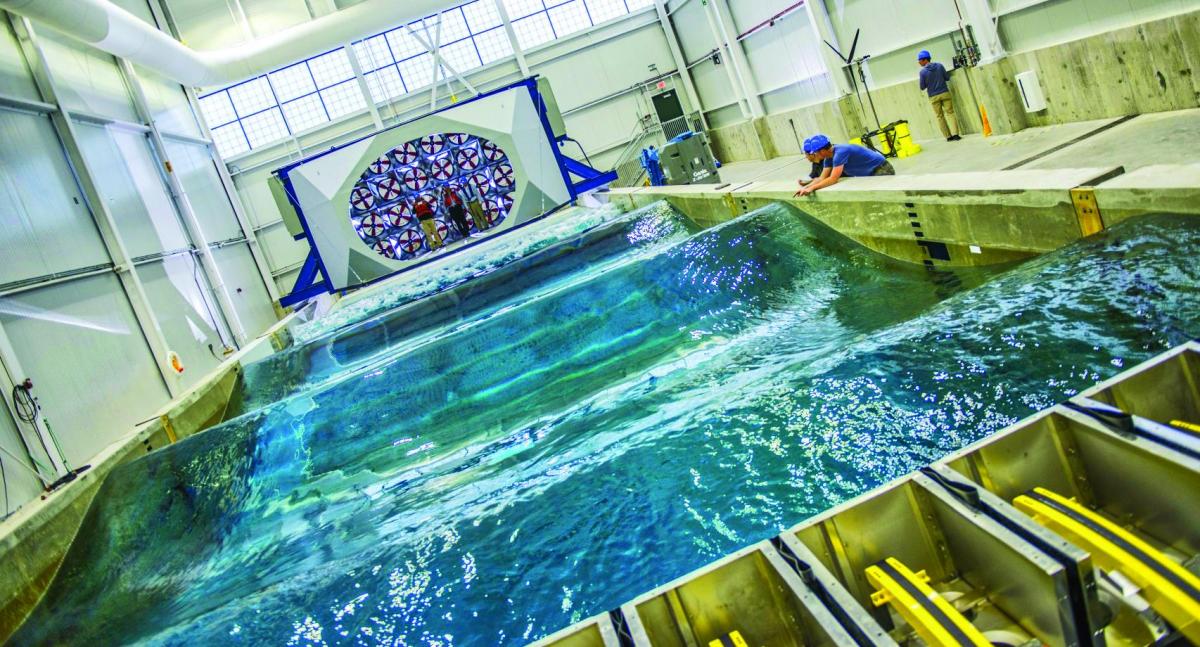 “Around the world, there are wind tunnels and wave basins built for a variety of purposes. But no one, before this, has put them together,” says UMaine Composites Center founding director Habib Dagher, who led the effort to construct the facility, called the Harold Alfond W2 Ocean Engineering Laboratory.

The Olympic-pool-size basin is capable of simulating any wind and wave scenario imaginable—hurricane-force winds, wave heights of 120 to 130 feet, confused seas, shifting wind direction—at a scale of 1 to 50.

W2 is a 100-foot by 30-foot basin equipped with a multi-paddle wave maker at one end, capable of creating waves of varying frequency. The system also incorporates a rotatable open-jet wind tunnel, a concrete floor that moves up and down to model a variety of depths up to 750 feet, and a tow carriage.

The need for W2 became apparent in 2008, when the lab was commissioned to test a floating offshore wind turbine for durability in wind and waves. Dagher and his team searched the world for a combined facility, with no results. For that contract, they designed a limited wind machine at a marine facility in Europe. When they subsequently surveyed more than 50 companies across the nation in various industries—including shipbuilding, ocean energy, offshore wind tidal energy, oil and gas, aquaculture, and civil infrastructure—they realized there was great potential for a purpose-built facility.

The idea was to build a dual facility, with W2 adjacent to a manufacturing plant that could build prototype test models—in as little as a week’s time—using advanced materials and techniques, including 3D printing and thermoplastic-formation. (Thermoplastics are polymers that become moldable above a certain temperature.) That manufacturing plant, expected to be online in the spring of 2016, will be called the Harold Alfond Advanced Manufacturing Laboratory.

“Let’s say you have a ship and you’re interested to see how well the ship will do in a variety of ocean environments,” says Dagher. “Having the ability to model both the wind and wave environment simultaneously is unique.”

Building the W2 facility required the development of new engineering and construction techniques. For example, the basin incorporates a beach at one end that “kills” the waves when they hit its perforated structure.

“When you’re applying waves in a basin, the waves travel from one end to the other end. You don’t want the wave to reflect back, or that will affect the accuracy of your results,” Dagher says. “You want the wave to go, but never come back. We spent a lot of time devising a beach design that allows us to attenuate the wave within a short distance.”

Likewise, figuring out how to make the basin floor move was no simple feat. Dagher and his team learned about a steel floor that moved via a hydraulic system, but at $1 million it was too expensive. Then they designed and built the nation’s first floating wind turbine, using floating and lightweight concrete technology, and realized the same technology could be used for the W2 floor. 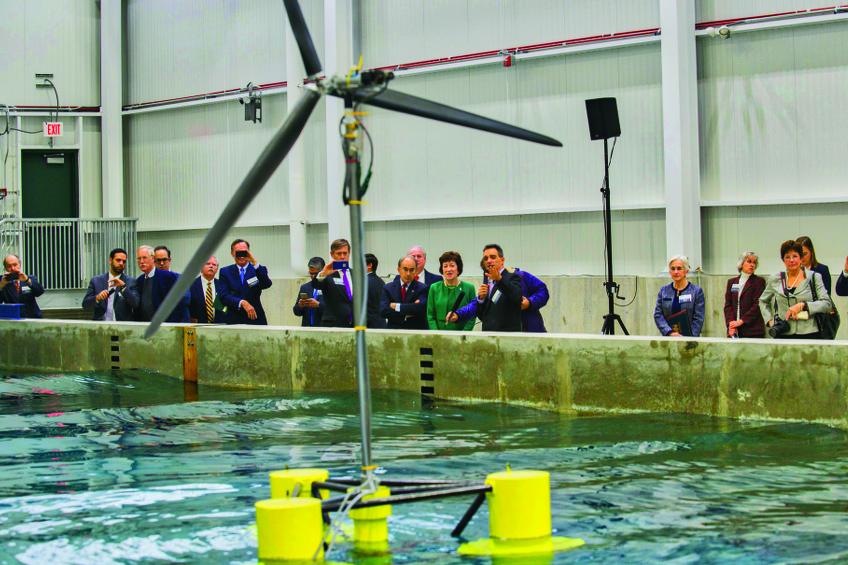 The University of Maine’s Advanced Structures and Composites Center has built what is believed to be the world’s first combined wind-and-wave simulator. Here, Habib Dagher explains the system to U.S. Sens. Susan Collins and Angus King and others. Photo © University of Maine “It priced out at $150,000—and it’s a unique construction,” Dagher says.

Construction of the wind wall also required considerable invention. Whereas most wind tunnels provide constant wind speed, W2’s rotating wind wall—comprising multiple jets set in a compartmentalized wall at one end of the basin—accurately models the increase in wind speed that occurs with greater elevation, and it provides for shifts in wind direction.

“When you provide a wind regime over a wave basin, the wind regime has to follow strict requirements in terms of accuracy and turbulence of the wind,” Dagher says. “When you design something that’s bigger than a dump truck that rotates, that’s significant. There’s no off-the-shelf design out there that rotates to increase wind speed.”

Boatbuilders are among those who expressed great interest in W2, Dagher says.

“A boatbuilder can test a new design in terms of its seakeeping capability. Or, say you have a new design for a sailboat for the America’s Cup. You can build a model and subject it to a variety of wave and wind environments.” Overall, he says, the facility has great potential for Maine. “Our ocean-based economy is a big part of the overall economy. This is a big deal for a state that relies on the ocean.”