Lighthouses to get radio-activated signals 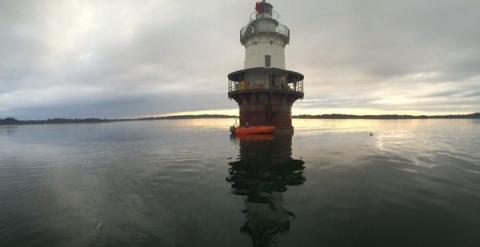 The Coast Guard plans to install radio-activated sound signal devices at 17 lighthouses in Maine. The devices which can be activated via VHF radio will allow boaters to activate a lighthouse horn on demand.

The change is part of a larger Coast Guard initiative involving fog signals at lighthouses across northern New England and the rest of the United States. The purpose of this modernization initiative is to replace the less reliable and less efficient VM-100 fog detectors with a Coast Guard-designed, radio-controlled system. The VM-100 detects precipitation levels and automatically sounds the foghorn when it senses moisture consistent with fog or other weather that might limit coastal visibility. That system is no longer supported by its original manufacturer.

The devices will allow mariners to activate the installed sound signal, on demand, by keying a standard VHF-FM radio five times consecutively on VHF channel 83A. The sound signal will then sound for up to 60 minutes following each activation.

According to an August 2014 article in the Bangor Daily News the system caused an uproar when it was first installed at Goat Island Light off Cape Porpoise in 2014. At the time, the Coast Guard said it planned to introduce the new system no matter what because the decades-old VM-100 system was old and increasingly difficult to service. Back in 2014, the Coast Guard faced complaints that the new system would be unusable by mariners who don't have VHF radios, placing those seafarers in greater danger, or that the foghorn could be set off when it's not necessary, potentially surprising and damaging the hearing of tourists visiting lighthouses. According to the Bangor Daily News article, the new system already had been installed at Moose Peak Light, at Whaleback Light between Kittery and Portsmouth, New Hampshire, Cuckolds Lighthouse in Boothbay Harbor, Wood Island Lighthouse in Biddeford, Pond Island Light in Phippsburg, and Nubble Light in York. Coast officials said then that the Rockland Harbor breakwater lighthouse, Dog Island Lighthouse, Ram Island Ledge Light off Boothbay Harbor and Owls Head Light were the next locations on the list to receive the new system. But there was no firm timetable for when those transitions will take place.

The lighthouses scheduled to receive the MRASS devices are:

Eight sound signals have been installed on lighthouses in Maine and New Hampshire since October 2009. Once each conversion is completed, the Coast Guard will contact local stakeholders directly, issue a Safety Marine Information Broadcast, announce the change in the Local Notice to Mariners, and initiate permanent changes to nautical charts and the Coast Guard Light List.