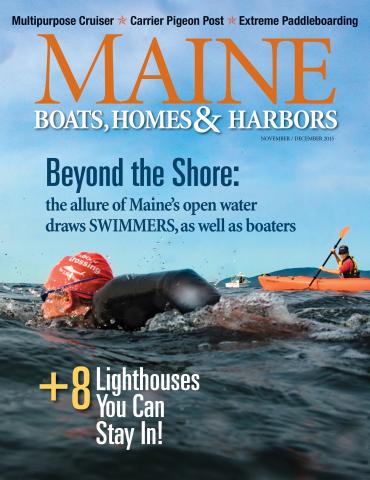 Maine Boats, Homes & Harbors magazine was honored with six awards, including being named a finalist for magazine of the year, at the 36th annual International Regional Magazine Association (IRMA) awards dinner September 19 in Ft. Lauderdale.
IRMA members include state, province, and regional publications from across the U.S. and Canada. The awards were for work published in 2015, and judged by independent panels of experts.
MBH&H was one of three finalists in the under 30,000 circulation category for magazine of the year, which was won by Missouri Life. Maine Boats, Homes & Harbors, which is based in Rockland, Maine, has been telling stories about the coast, boatbuilders, art, and architecture for 29 years. The magazine also hosts an annual boat and home show each August on the Rockland waterfront.
“The wide range of stories was impressive in this magazine. I loved reading about minimalist living on a boat, about restoring old boats, and the crafts and businesses that pop up around the community. Great reading—especially for the summer!” wrote one judge about MBH&H. “Content covers a compelling array of subjects. Consistent to the overall message but surprising and enjoyable,” wrote another.
Other awards won by MBH&H and its writers and staff included a silver medal for a general feature in a category that included magazines of all circulation levels for a story about long-distance ocean swimming by Hodding Carter. “Nice work. Great to see this quality in a smaller regional magazine,” the judges wrote.
First place for general feature went to Adirondack Life and the bronze medal went to Down East.
MBH&H writer Paul Molyneaux won a bronze for essay writing for his story about building a skin-kayak with his son. Silver in this category went to Arizona Highways and gold to Down East for an essay by Ron Currie Jr.
MBH&H’s other awards included: In categories that included magazines of all circulation levels, an award of merit for “Baskets with Spirit,” by Billy Ray Simms about Native American basketmaker Jeremy Frey. “Wow, this is how you cover an artist’s story,” the judges said; an award of merit for travel feature for a story by Mimi Bigelow Steadman about Eagle Island and Admiral Peary’s home there on Casco Bay; and in the under 30,000 circulation category, an award of merit for historic feature for a story about Kittery eagle carver John Haley Bellamy by James Craig.
IRMA is a non-profit association composed of 35 regional magazines from across North America. Regional magazines are defined as having general interest, lifestyle or tourism editorial content about a specific region.
For links to the MBH&H stories:
http://maineboats.com/print/issue-137/beyond-the-black-lines
http://maineboats.com/print/issue-133/rollordie
http://maineboats.com/print/issue-136/baskets-with-spirit
http://maineboats.com/print/issue-137/eagle-island
http://maineboats.com/print/issue-134/american-eagle