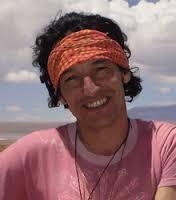 Maine’s community of artists and boat-builders lost one its bright stars last week with the death of birchbark canoe master builder David Moses Bridges, 54, following a courageous battle with cancer.
David was a proud Wabanaki, a Passamaquoddy native. Born in Portland on May 17, 1962, the son of Earl Bridges and Hilda (Soctomah) Lewis, he attended Unity College and earned a degree in forestry. He lived for many years in San Francisco, Calif., before returning home to Maine to reconnect with his family and the land that he loved. He attended The Boat School in Eastport, and later went to work at Benjamin River Marine and Brooklin Boat Yard, both in Brooklin, Maine.
While taking a class on "Traditional Birch Bark Canoe Making" at the Wooden Boat School in Brooklin, he became friends with Steve Cayard, the instructor. He went on to apprentice and teach the class with Steve. In the years that followed, David developed his craft with passion, exploring all aspects of the history and technology. As his skill grew, he shared the craft in the Native communities, museums, schools, institutions and with all of those who were fortunate to know him. He became a recognized master, widely sought after for commissions, teachings and lectures. He will be missed.

Fishermen selling directly to members of the public