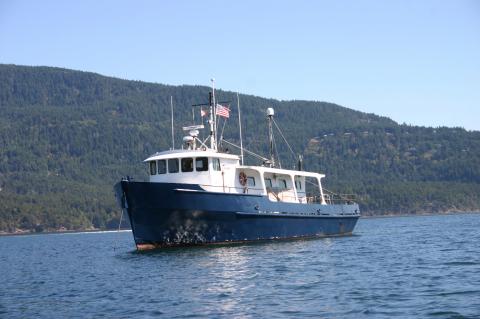 The Internet remains a great tool for connecting us with our history. This winter a fisherman in Ketchikan, Alaska contacted the Maine Seacoast Mission in Bar Harbor via Facebook with a photo (shown in the photo on the right) of one of the mission’s former Sunbeams — since its founding in the early 1900s, the mission has had seven different vessels for spiritual, education, and medical outreach along the Maine coast and its islands, five of them named Sunbeam.

“I thought you would be interested in seeing a more recent photo of Sunbeam IV (now Northern Sage),” wrote Captain Bruce Painter. The folks at the mission perked right up. The Mission’s Marketing Director Scott Fish checked back with Painter to find out more about the boat and how it came into his possession. 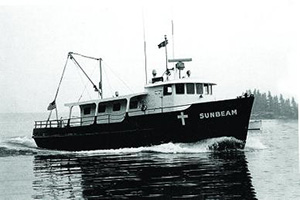 The 65-foot long Sunbeam IV (shown here in its heyday)  was designed by Luther Blount and built by Blount Marine Corp. (hull No. 67) in Warren, Rhode Island in 1964. Her first captain was William Berry who was succeeded by David Allen. The boat was replaced in 1995 with the current Sunbeam V — 75 feet long, built by Washburn and Doughty in East Boothbay and captained now by Mike Johnson.

Painter bought the boat in Ketchikan in 2001 and renamed it Northern Sage. He told Fish he thought he was the boat’s fourth owner. Early on, after being sold by the mission, the boat was renamed Sea Eagle and at some point an owner took the boat from Maine to Alaska, he said.

In the meantime, the mission has begun to talk about the future of the Sunbeam V, whether to continue upgrading the current boat or replace it. The Sunbeam V was hauled recently for maintenance at Billings Diesel and Marine in Stonington, where a more powerful new bow thruster was installed to improve the boat’s ability to maneuver into small island harbors and docks. Other work included painting and mechanical systems repairs and upgrades, according to Mission staff. 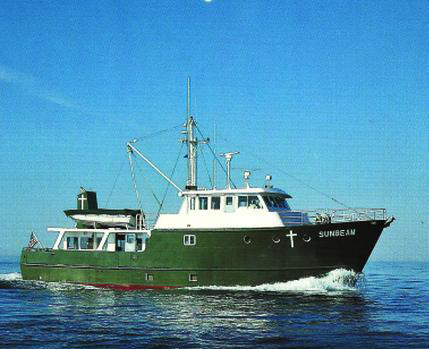 In the spring of 2016, a group of builders from seven Maine boat-building companies (John Williams Boat Co., Hodgdon Yachts, Washburn and Doughty, Billings, Front Street Shipyard, Wesmac Custom Boats, and the Hinckley Co.) toured the 22-year-old vessel (shown above) to help the mission assess its condition and make decisions about its future. At this time, the mission has not yet decided its plans for the boat, Fish said.