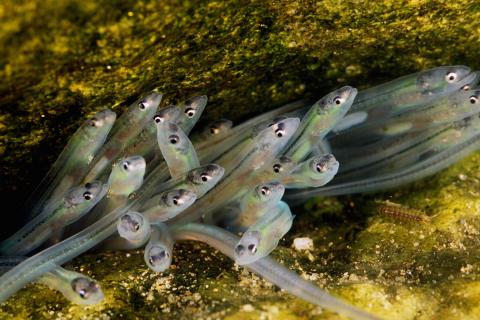 The Maine Department of Marine Resources plans to shut down the elver fishery two weeks early, on May 24 at 6 a.m. because of illegal sales, which jeopardize the department’s ability to manage the fishery, according to a release from the department.

An investigation by the Maine Marine Patrol revealed that some Maine elver dealers were paying a cash amount that was substantially less than the per pound price for elvers that were harvested and accounted for through the state’s swipe card system. The investigation is on-going and charges will be filed against dealers and harvesters who bought and sold elvers without using the state’s swipe card system, according to the news release. Soon after the season opened March 22, dealers were paying a record-high average price of over $2,700 for a pound of the baby eels.

The swipe card system records the weight and value of each sale, allowing the state to ensure that harvesting does not exceed individual and overall state quotas. The state’s overall quota is set by the Atlantic States Marine Fisheries Commission, and individual quotas, which add up to the overall quota, are established by the state. The value and weight of the illegally harvested and sold elvers were not recorded with the swipe card system and not accounted for in DMR’s quota management system.

The swipe card system was established in 2014 to allow DMR to obtain accurate, timely information on the amount of elvers landed and sold in Maine and has been key in the state’s ability to comply with the overall quota requirement.

“This is a fishery that stood to net Maine license holders nearly $24 million this year, and now because of the greed of some dealers and harvesters, I am obligated to cut that opportunity short,” said Maine Department of Marine Resources Commissioner Patrick Keliher.

“We believe that if the illegal sales had been recorded, the 2018 elver quota would have already been exceeded,” said Commissioner Keliher. “For this reason, an immediate closure of the fishery, done through emergency rulemaking, is necessary to prevent depletion of the elver resource.

“The future of this lucrative fishery is now in question,” Keliher said. “We clearly have to consider additional measures to ensure that Maine can remain compliant with ASMFC, that we can continue to protect our state’s valuable marine resources, and that we can hold accountable anyone who chooses to squander the opportunity those resources represent.”