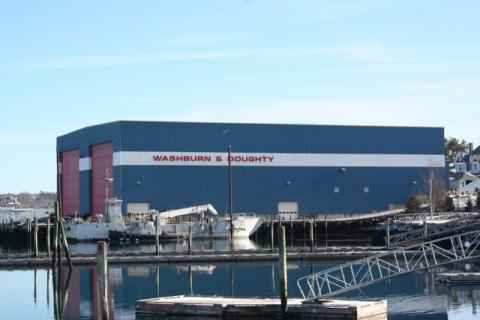 Washburn and Doughty in East Boothbay has won the contract to build a new $8.8 million Maine State Ferry Service vessel, according the Maine Department of Transportation.

The company was one of five bidders, and the only Maine shipbuilder, who submitted a proposal, according to DOT.

The new 154-foot vehicular and passenger ferry was designed by Gilbert Associates, Inc., a naval architecture and marine engineering firm in Braintree, Massachusetts. Designed to be able to serve any of the MSFS island communities other than Matinicus, it will have three main deck lanes, for a capacity of 23 cars or a mix of cars and trucks, as well as 250 passengers.

Current plans call for the ferry to serve Swan's Island in the summer and Vinalhaven in the off-season, according to DOT spokesman Ted Talbot. Construction is expected to begin shortly and the new ferry will go into service 600 days later, he said.

"We are thrilled to have a Maine boatyard with an impeccable history of quality as the successful bidder for the new ferry boat," said David Bernhardt, Commissioner of MaineDOT. "Washburn & Doughty built three of the ferry boats currently in operation for the Maine State Ferry Service, and we look forward to partnering with them for our first new boat in more than five years."

"We are honored to have been selected to construct the new ferry service vessel for the Maine State Ferry Service," said Katie Doughty Maddox, the company's vice president of sales and marketing. "This contract will create jobs at our shipyard during its construction and we are proud to have our Maine workers building a vessel to serve Maine residents, businesses and visitors to our Midcoast island communities."

The Maine State Ferry Service, a division of the MaineDOT, serves the island communities of Vinalhaven, North Haven, Islesboro, Swans Island, Frenchboro and Matinicus. Maine law provides that operating expenses for the ferry service are paid one-half by residents of Maine through the Highway Fund Budget and one-half by user and other fees.

Capital costs for the ferry service, including the construction of ferry boats, maintenance and upgrade to facilities and improvements to supporting infrastructure, is fully funded through MaineDOT. The funding for the construction of the new ferry boat to be built by Washburn & Doughty will come from a combination of Maine bond funding and other local highway fund and federal dollars.

Talbot said DOT does not currently have specific plans for additional new ferries. "But we do have in our workplan almost $25 million in capital improvements planned that include the construction of the new boat and mid-life extensions for four of the ferries," he said.