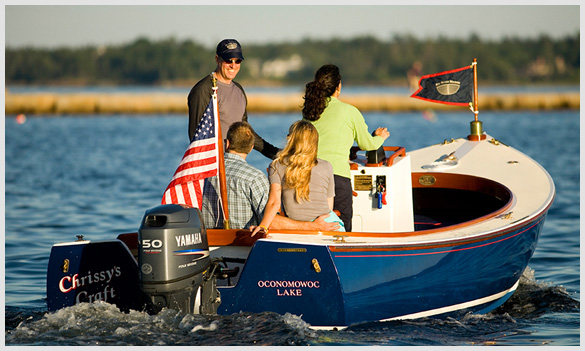 Six River Marine delivered this Maine-built boat to a family in Wisconsin.
Click here to view the image gallery. All images by Jeff Scher.


Launch Details:
Particulars: Six River Marine is pleased to announce the launch of another boat from its West Pointer series. With sea trials complete and having recently been on display at the 2008 Maine Boats Homes & Harbors Show in Rockland, Maine, Chrissy's Craft has been delivered to its owner in Wisconsin. Six River Marine has been building West Pointers for a number of years now. This one was different because the owner had a number of specific requirements over and above the standard features of the boat. First, the owner wanted seating forward and aft that would comfortably accommodate seven adults. This meant a slight increase in the boat's length over all from the standard 18'6" to 19’. A new cockpit configuration was designed. The result was an elliptical layout that allowed curved seating areas forward and aft of the helm position. The entire cockpit then received a varnished mahogany coaming. A well for the 50-hp Yamaha outboard was desired and it was crafted to mirror the elegant curvature of the cockpit’s coaming. At the helm, the owner wanted a custom captain’s chair that would tie in with the aesthetics of the new boat. Six River Marine’s co-owner, Scott Conrad, hand-crafted an elegant dove-tailed mahogany seat. The boat also included an oiled teak cockpit floor and bronze running lights, cleats, chafe strips, chocks, etc. The cold-molded hull, as well as the weather decks and interior ceiling, were Awlgripped. Chrissy’s Craft will ply the waters of Lake Oconomowoc in Wisconsin where it will serve as the family’s recreational launch. “Every West Pointer we build is an enjoyable process but this boat was especially gratifying”, noted Six River Marine co-owner, Chip Miller. “The boat’s owner had very definite ideas on what he wanted, and it was a challenge to successfully incorporate all of his requests. In the end, this collaborative process turned out to be a resounding success. The owner is excited about the boat and all of us are very proud of her as well.”
Image Gallery:
image gallery


Information and specifications supplied by the builder. Every effort has been made to ensure accuracy. However, Maine Boats, Homes & Harbors accepts no liability in the event of any errors of fact or omission.